Here’s the lowdown on the U’s warm-weather fest. 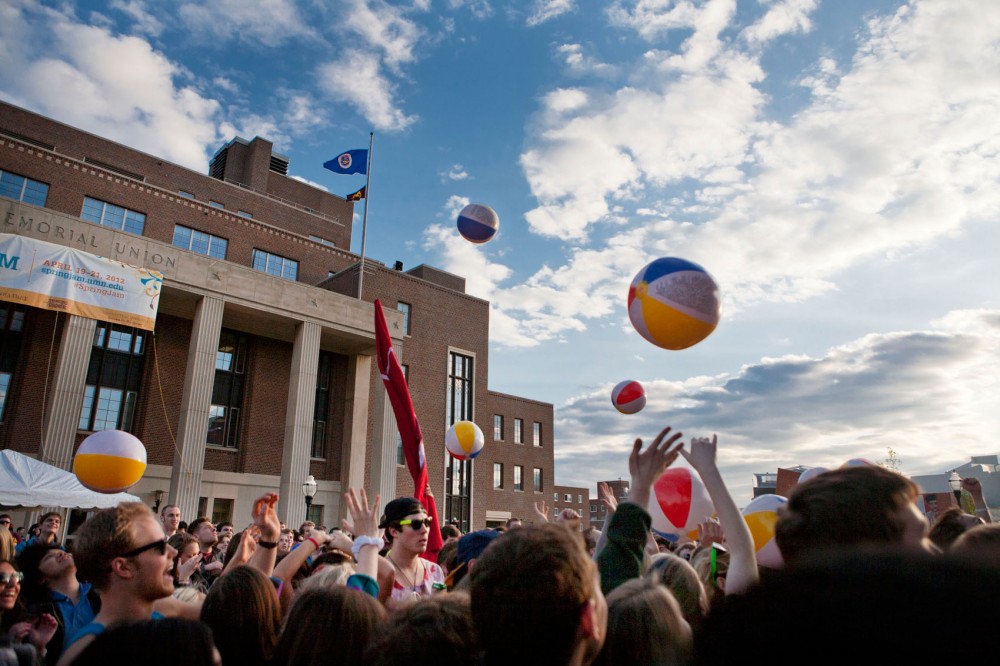 Students and the public attend the Battle of the Bands on Friday, April 20, 2012, in front of Coffman Union.

A chorus of disapproval met the Spring Jam lineup when it was announced online a few weeks ago.

On the Student Unions and Activities Facebook page, comments ranged from incredulous to disappointed to downright pissed — one of the most liked and frequently echoed simply asked: “Who’s Mat Kearney?”

The short answer is that he’s a workhorse of a musician, a marginally successful alt-folk Christian strummer, and that maybe he’s not the biggest or rowdiest artist, but who cares? If you’re the kind of person who goes to Spring Jam, you’re the kind of person who has fun no matter who’s playing. Here’s the long answer — 13 things you might not know about how Spring Jam entertainment gets picked and how you’re involved.

No. 1: The headliners are chosen by students, really.

It’s not some pencil-pushing group of grown-ups that picked this lineup. The truth is that students — a program board of 11 people, four coordinators and their advisers — work in SUA to organize homecoming, Spring Jam and events in between. They’re the same people who cover the walls in Coffman Union and the St. Paul Student Center with art; they’re the same people who have brought B.J. Novak, Sarah Silverman, the comedians of “Chelsea Lately” and others to campus.

Contracting with artists starts in November, but research starts long before that. The biggest outreach push to figure out what students want is during homecoming, when SUA sends out volunteers with clipboards and T-shirts who ask who people want to see during Spring Jam.

“We instruct all our volunteers or whoever’s doing that role to write down anything a student tells them, whether that’s a specific artist or a genre or even a location,” said Ashley Kaser, a psychology senior who works as the programs coordinator.

“Having 50,000 students on our campus means that we have 50,000 different artists that students are going to tell us — and that covers different genres, that covers everything,” Kaser said. She estimates that organizers considered about 250 artists for this year’s Jam.

No. 4: Mat Kearney wasn’t the first choice for this year’s headliner.

Once all the artists were poured through the availability and price filters, Kearney rose to the top. “Of our available artists, he was our top choice, said Karly Wallack, a strategic communications senior and the marketing coordinator.

No. 5: But that doesn’t mean SUA isn’t pleased about it.

“Yeah, he has a style of music, and maybe that’s a little mellower but him live is not,” Kaser said. Kearney interacts with his audience, making up songs for them and doing covers. “I think it was a shock to the system,” Kaser said of the student response. And that, she said, was intentional. “We’re very aware of how much hip-hop has been brought to campus, and I think we wanted to give other students who aren’t so hip-hop focused something to get excited about,” Kaser said.

No 6: There was a big push for country this year.

The homecoming surveys showed students want country, hence crooners Greg Bates and Kayla Conn. “For us, it was very important to get a very real, authentic country artist,” Kaser said. “Last year, we dipped our toes into country with Jessie James and had an awesome response from students.”

No. 7: The genre balance must be maintained. One of the trickier parts of organizing Spring Jam is making sure that the bill isn’t stacked with one genre or another. This year, Kearney, Bates and Conn will be balanced by up-and-coming rapper Theophilus London, Tennessee-to-Twin-Cities singer Chastity Brown, Minnesota bluegrass crew Pert Near Sandstone and hyped-up rockers The Kicks.

No. 8: SUA students and staff maintain that memory of the 2009 riots doesn’t figure into choosing artists.

In 2009, Talib Kweli was slated to be the Spring Jam headliner. The University of Minnesota was going to pay $27,500. But Kweli got stuck in Chicago and never showed up. The riots of that night, which some blamed partly on the cancellation, have since become legendary: More than 500 students ran wild in the streets of Dinkytown, starting fires and smashing car windows. That night ended in riot sticks, backyards full of tear gas and 12 arrests.

“The [Spring Jam] activity that we had had no connection to the riots whatsoever,” said Erik Dussault, assistant director at SUA. “So for us, we were pretty removed. We didn’t have any kind of dealings with what was going on because the riots were happening in the Dinkytown neighborhood.”

No. 9: Our urban setting does matter.

Dussault, who’s been working at SUA for a decade, notes the office can’t really compare spring festival notes with other Big Ten schools — there are too many places in the Twin Cities that artists can perform instead of the Riverbend Plaza. “It’s not as easy to just look at what Madison or Ohio State is doing because they don’t have the venues that they’re competing with like we do,” Dussault said.

No. 10: Popularity of artists matters, too.

One of the ways SUA scopes out perspective artists is by taking various snapshots throughout time of the number of likes artists have on Facebook, both in general and from University students. They also look at the charts you can see on Facebook — is an artist’s popularity on the rise? Have they remained steady?

“That gives them a little bit of the scale of the popularity of that artist within the campus community — we don’t always have to rely just on surveys of people saying they want this person to come in,” Dussault said.

No. 11: The tradition of ticket-less concerts is important.

We all pay for Spring Jam through our student services fees. As the Minnesota Daily has reported, Kearney cost $35,000. Last year, New Boyz and The Cataracs cost $30,000. Bringing in bigger artists would mean charging at the door. About five months ago, SUA posted a poll on its Facebook: “Would you pay to have a big name artist kick-off Spring Jam on Thursday, April 25?” Eighty-six percent of respondents said “yes.” But a bigger name would necessitate a venue change. Dussault wondered: “Would that change Spring Jam and make it something that students aren’t interested in? So if Spring Jam were to happen in Mariucci [Arena], for example, is that still Spring Jam?”

No. 12: You can’t sit in on the Spring Jam or homecoming meetings for next year unless you get involved with SUA.

Meetings of the program board are not public, and minutes are not taken. This is partly because artist information is confidential. It’s also because the minutes wouldn’t make sense: “Our meetings are rather informal,” Kaser said.

No. 13: The kids behind the Jam want to hear from you.

They routinely recruit volunteers, and there are a few paid positions as well. But you don’t have to up and work for SUA — just give ’em a holler.

“We encourage people to engage with us via social media, like on Facebook — we definitely take all of their comments into consideration when planning for next year’s Spring Jam — I know they’re already looking at that stuff,” Wallack said.