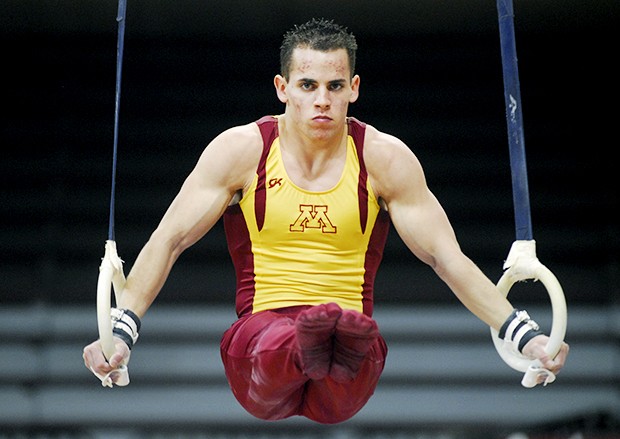 The stakes were high as ever as Minnesota menâÄôs gymnastics faced their biggest challenge of the year in No. 5 Penn State Saturday night. But the circumstances of the Iceberg Invitational were exactly the kind head coach Mike Burns prepares his team for every day. A tight meet through and through led to a down-to-the-wire finish in which the Gophers capitalized. Moving into the final two events, Minnesota only trailed by a tenth of a point. The Gophers struck first, showcasing a solid parallel bars routine led by freshman Russell Dabritz. Dabritz, who still was feeling under the weather on Saturday , went on to tie NCAA champion Casey Sandy for first place in the event. âÄúFor him to be able to pull that routine out and do the job he did was a real testament to what these guys have inside of them,âÄù Burns said. Then the Nittany Lions, led by Sandy, put up an even better high bars routine. Sandy won the event along with four others to be crowned the all-around champion for the night. âÄúI wouldnâÄôt say we necessarily have a Casey Sandy superstar on our team. We just got 12 guys with a lot of heart that are willing to put it all on the line and get âÄòer done,âÄù Burns said. Penn StateâÄôs high bar performance gave them a full one point lead going into the final event. The sudden change of events in the fourth event didnâÄôt bring the Gophers down; they just knew what they had to do in the fifth. Mike Burns just wanted to be sure of it with a little pep talk. âÄúI pulled them together and I said, âÄòWe can do this.âÄô âÄù BurnsâÄô team listened well. When it came time for Minnesota to hit the high bars, they hit it hard. Sophomore Ali Aleiou started the routine with a bang. âÄúSo he knocked out a great set and tapped it off with a stuck dismount that just got the crowd going nuts. Our team bench just exploded. The floodgates opened,âÄù Burns said. Meanwhile, Penn State couldnâÄôt match as they had difficulties on the parallel bars. The win wasnâÄôt the cleanest , but it was one Burns and the Gophers gymnasts took with pride. âÄúIn my mind this team took a huge step forward in terms of defining themselves as a team that has a chance to do some really special things this year,âÄù Burns said. Minnesota womenâÄôs gymnastics also took pride in their meet at No. 7 Oklahoma on Friday, despite another loss on the season. This marks their third consecutive defeat. Coaches, however, are seeing constant improvement in all areas, which is something that theyâÄôve been pleased with. âÄúAll we can do in a competition is to perform the best we can as individuals. So all of our energy and focus goes into that,âÄù co-head coach Jim Stephenson said. The women came together to score 195.675, more than a full point better than last weekendâÄôs Michigan loss. In a pack of Minnesota gymnasts achieving personal best scores Friday night, seniors Carmelina Carabajal and Alexis Russell stood out again. Both achieved career-best scores and finished first and second respectively in the all-around. âÄúThose two athletes, Carmelina and Alexis, they have all the same attributes that the rest of the team has but all of them to a more professional level,âÄù Stephenson said.