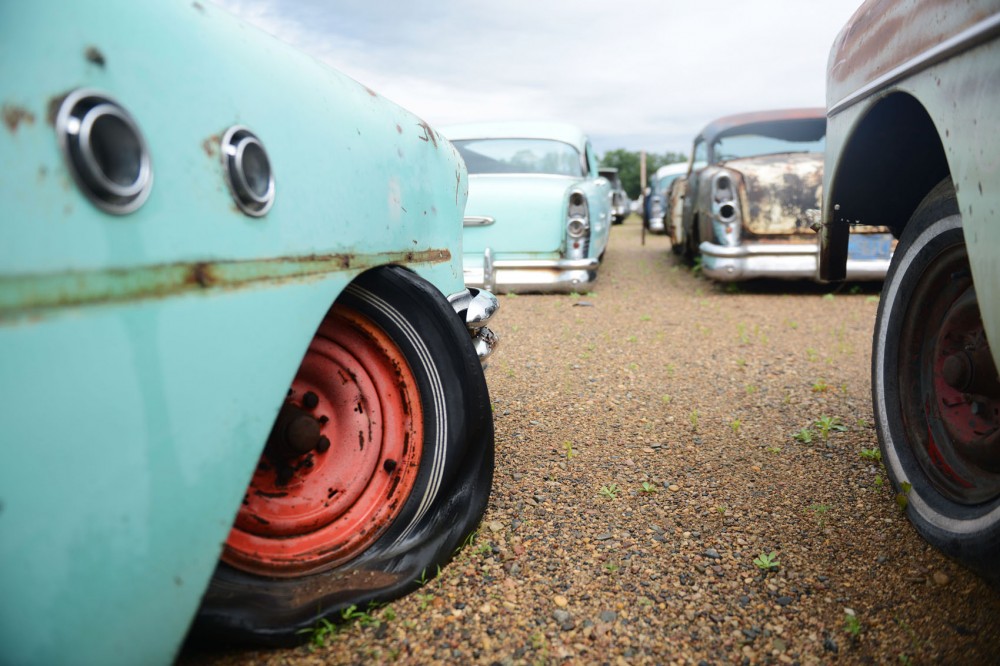 ANNANDALE, Minn. — Behemoths like a basil-green Lincoln Continental point to a tad of truth behind the glib clichÃ©, “They don’t make them like they used to.” It’s hard to look at the derelict and not want to save it, along with any other classic car parked here on French Lake Auto Parts’ 100 acre lot outside Annandale, an hour west of Minneapolis.

French Lake Auto Parts was founded in 1956 by Floyd Nolan, whose family still runs the business. Floyd’s son, Skip Nolan, bought out the junkyard in 2010 and currently helms the operation, though his dad still keeps involved.

“[Floyd] loved cars and started collecting them, and one thing grew to another,” Nolan’s daughter Denise Ellis said.

Since then, French Lake Auto Parts has grown from a community junkyard to America’s classic car mecca. Local and national customers make the pilgrimage to buy whole cars for restoration or demolition derbies, acquire parts for their jalopy, or spend the day browsing, admiring the faded patina and seductive tail fins of a bygone era. At its height, the junkyard was home to approximately 13,000 vehicles, but an EPA-mandated land leveling led them to reduce their inventory to between 5,000 and 6,000 cars.

“The car clubs come out on a regular basis,” Ellis said. “They notify us months ahead of time, so they have their route planned out. They’ll stop and spend quite a few hours here and look out back, because they’re looking for specific parts and what kind of new stuff we’ve got in.”

Though French Lake is a regular host to curious customers and browsers, the advent of the Internet decreased the number of spontaneous stop-ins.

“Before the Internet, we used to get — on a Saturday — 300 to 400 coming to get their parts,” Floyd Nolan’s son, Shawn Nolan, said. “Now most of them look on Craigslist or eBay and get their parts off there, so they don’t have to leave their couch.”

“But a lot of them still like to come and visit,” Ellis chimed in. “There’s ones that will go [out] back and they’ll have [a] lunch and their little red wagon.”

“They bring their [families] out and go on a walk; they’ll buy a trinket or hood ornament, just to take home,” Skip Nolan’s son-in-law Randy Reinert said.

Though the yard isn’t as busy as it once was, French Lake’s expanded online presence helped them develop international renown, particularly in Sweden and the Netherlands, where restoring American cars is all the rage. In one area of the junkyard, six yacht-sized Lincolns, ranging from 1956 to 1977, sat awaiting shipment to Sweden.

While that’s a large size for an outgoing shipment, it’s not uncommon for French Lake to take on large collections of automobiles.

Shawn Nolan described these “car hoarders” as deceased Midwestern farmers who loathed the idea of sending their driving machines to the scrapyard. The collections usually range from a dozen to 150 cars, though both Nolan brothers recounted that one haul from Ellsworth, Wis., brought in 250 cars and trucks.

Though many of these cars become fixtures in the yard, others are unlucky enough to meet the crusher.

Outside the business, the Nolan family is active in the car community at large. Floyd, Skip and Denise all competed in demolition derbies, and Shawn is a fixture at a popular Minnesota street rod show.

Skip and Shawn routinely pull cars from the lot — or whatever piques their interests nationally — to restore. Skip’s favorite restoration out of French Lake was a 1966 Chevrolet Nova SS, but he’s more enthusiastic about his current project.

“I’m doing a 1934 Ford four-door that was 100 percent stock,” Skip said. “I bought it from a guy in Denver, Colorado; it was his grandpa’s car. That one’s going to get a small block [Chevy engine], an automatic and a nine-inch lowered rear end. I’m going to leave the patina on it, and put a new interior in it, new tires on it with old school lookin’ rims.”

The Nolans’ passion for cars is what keeps the business rolling. Though most of them run businesses on the side, they revolve around vehicles, and most members of the family have worked at French Lake their entire careers.

Early introductions to cars began at home, before any of the younger Nolans and kin learned the ropes.

“When we were little, there’d be an old Volkswagen for us to sit and play in at home, with no tires or anything, but still we could learn how to shift,” Ellis said. “It’s always been around us.”

But it’s the familial and community bonds that make it all worthwhile. Loyal customers become friends and loyal friends become customers. They establish these bonds locally and nationally; from the barbecue joint that caters to the employees (the owner is a longtime customer) to the hosts of Discovery Channel series “Fast N’ Loud,” who filmed an episode at the junkyard and routinely call over to shoot the breeze about all things automotive.

“It started with the cars, and it ends up being friendship,” Ellis said.