Lettieri set a career high in points his senior season with 37 in 38 games. 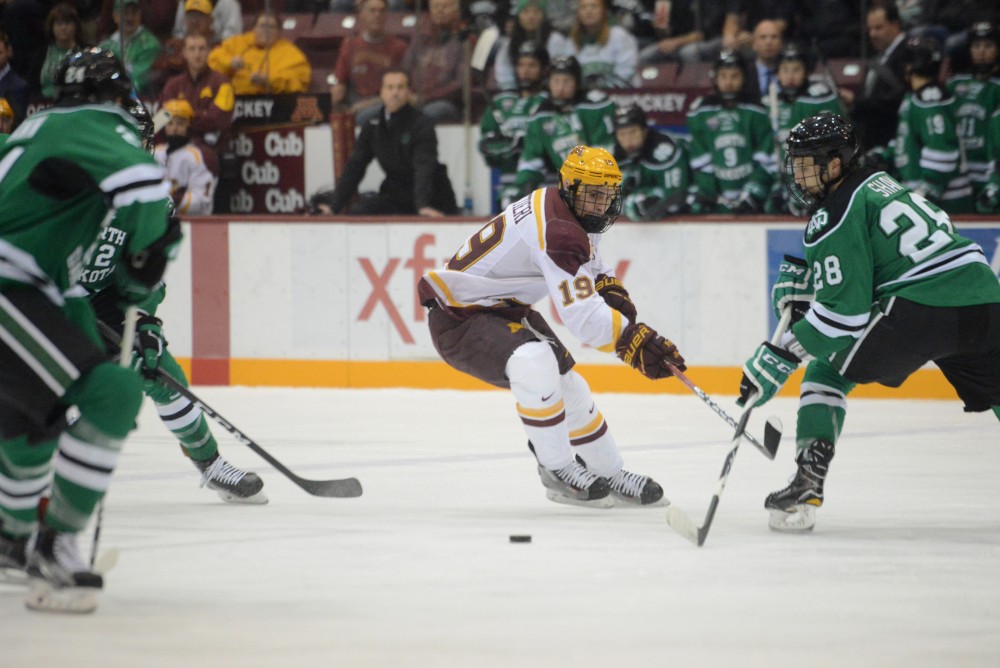 Senior forward Vinni Lettieri looks to steal the puck on Friday, Nov. 4, 2016 at Mariucci Arena. The Gophers tied 5-5 against the University of North Dakota.

Monday marked the first day a departing Minnesota player made it official.

“Being a Gopher is something I will be proud of for the rest of my life, and I am so thankful I had the opportunity to play here at the University of Minnesota,” Lettieri said in a statement. “It’s bittersweet to be moving on from a place you love so much, but this has been a dream of mine since I was a kid, and I’m thrilled to be signing with the Rangers organization.”

The Wolf Pack have eight games remaining on the regular season schedule, and will not qualify for the AHL playoffs.

The senior played the best hockey of his collegiate career this past season, and scored 37 points in 38 games.

The center also brings with him his team-leading faceoff percentage of .551.

After scoring just eight points in his freshman season, Lettieri improved to 12 points the following season, 26 his junior year, and breaking out as the second-line center and 37 points his senior campaign.

Among the teams that were interested and had offers out for Lettieri were the Rangers and Chicago Blackhawks, the Star Tribune reported.

“I am so proud of the player and the person that Vinni has become during his time with the program,” Minnesota head coach Don Lucia said in a statement. “I don’t think there is anyone who has worked harder for an opportunity like this, and we know Vinni will bring that same level of commitment to the New York Rangers. We wish him nothing but the absolute best.”