Minnesota battled back to a 4-4 tie Saturday after a 5-1 win Friday. 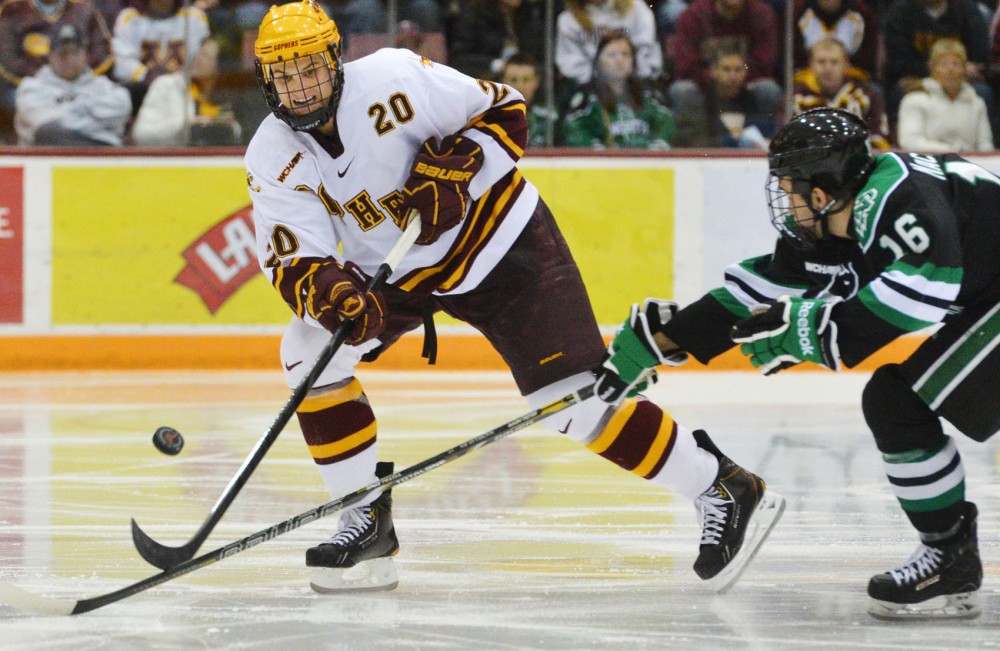 Minnesota defenseman Mark Alt passes past North Dakota forward Mark MacMillan on Jan. 19, 2013 at Mariucci Arena. On Friday the Gophers defeated the Sioux 5-1, but Saturday's game ended in a 4-4 tie.

Nobody won Saturday’s game between Minnesota and North Dakota at Mariucci Arena — in more ways than one.

On the ice, the top-ranked Gophers erased a two-goal deficit to tie North Dakota 4-4. Minnesota beat North Dakota 5-1 on Friday.

In the stands, despite the entertaining game and vibrant atmosphere throughout the weekend, fans left disappointed knowing the game’s final horn marked the last time the two bitter rivals would play in the regular season for the foreseeable future.

“It’s such a huge rivalry, and it’s fun for players,” Gophers junior Zach Budish said. “I know the fans have a blast with it.”

“It’s sad because this is a weekend you look forward to all year,” Gophers junior Nate Condon said. “Everyone’s been gearing up for this game, and it brings the best out of some people.”

North Dakota was left off Minnesota’s future schedules partly because of the school’s fiasco with its old nickname, the Sioux, and partly because the Gophers wanted to keep playing in-state schools along with nonconference teams from the East Coast.

“It’s going to be one of those games that you miss,” Condon said. “Unless you play them in the playoffs, which will be even more exciting, I guess.”

There are many memorable moments that have shaped the Gophers-North Dakota rivalry over the years. Minnesota beat North Dakota just last year at the Xcel Energy Center to advance to the NCAA Frozen Four. In 2007, the Gophers’ Blake Wheeler scored a diving game-winning goal in overtime of the WCHA Final Five in the same building. And even as far back as 1979, Minnesota’s Neal Broten scored the game winner in similar fashion in the NCAA championship game.

It seemed only fitting that the final game of this weekend series ended with some drama as well.

With 10 minutes remaining in Saturday’s game, No. 6 North Dakota held a 4-2 lead.

“It was back and forth,” Budish said. “They kind of took the play to us for a while.”

Both teams had traded goals in the first period, and Corban Knight and Rocco Grimaldi scored midway through the second in quick succession to give North Dakota a 3-1 lead.

Gophers’ Sam Warning answered Grimaldi’s goal, but North Dakota regained its two-goal lead on a wraparound goal by Drake Caggiula in the third.

Down two goals with 10 minutes remaining, two of Minnesota’s stars stepped up. Nick Bjugstad scored at the 11:10 mark of the third, and Condon tied the game with three minutes left after Budish fed him a nice pass from the corner.

“Budish just battled up and down the boards, and I got open in the slot,” Condon said. “He threw it to me, and I just hit it as hard as I could, didn’t aim anywhere, and it just went in.”

The goals stopped after that, but the fireworks did not.

The final three minutes of the third period and the whole five-minute overtime period were full of action, including a shot by Grimaldi that rang off the post.

The Gophers earned the tie despite an unusually shaky start by goalie Adam Wilcox. The freshman looked like one for the first time this season and gave up four goals on 26 shots.

“I’m proud of our guys,” head coach Don Lucia said. “At two different times, you’re down two goals and found a way to come back and get a point out of it tonight.”

Where Wilcox was the Gophers’ Achilles’ heel Saturday, he was their star Friday. He had 24 saves on 25 shots in a game that was a lot closer than the final score indicated.

“We’ve come to expect that from [Wilcox],” Condon said Friday, “but you can’t always bank on that.”

Wilcox’s saves were difficult because North Dakota put traffic in front of the net all night.

The rival teams seemed content to feel each other out Friday, and 10 minutes in, each team had only registered one shot on goal. Minnesota held an 8-5 shots advantage after a scoreless first period.

“I thought that when the game started, it was kind of tentative on both sides,” Lucia said. “It was cautious — nobody wanted to make a mistake.”

Things picked up in the second period when a puck deflected off Minnesota defenseman Seth Helgeson and behind Wilcox. Michael Parks was credited with the goal, which gave North Dakota a 1-0 lead.

“You kind of just have to forget about it,” Wilcox said of the goal. “Every now and again there’s going to be a bad bounce like that. It’s better than letting up a squeaky five-hole from the red line.”

Budish quickly responded with a game-tying goal. Then Ben Marshall, Nate Schmidt, Condon and Erik Haula followed suit as the Gophers scored five unanswered goals to close out the game.

Haula’s goal was an empty netter. The Finnish center played first-line left wing in his return from an injury he suffered Dec. 30 against Boston College. He had a goal and two assists on the weekend.