Punter from down under jumps to D-I 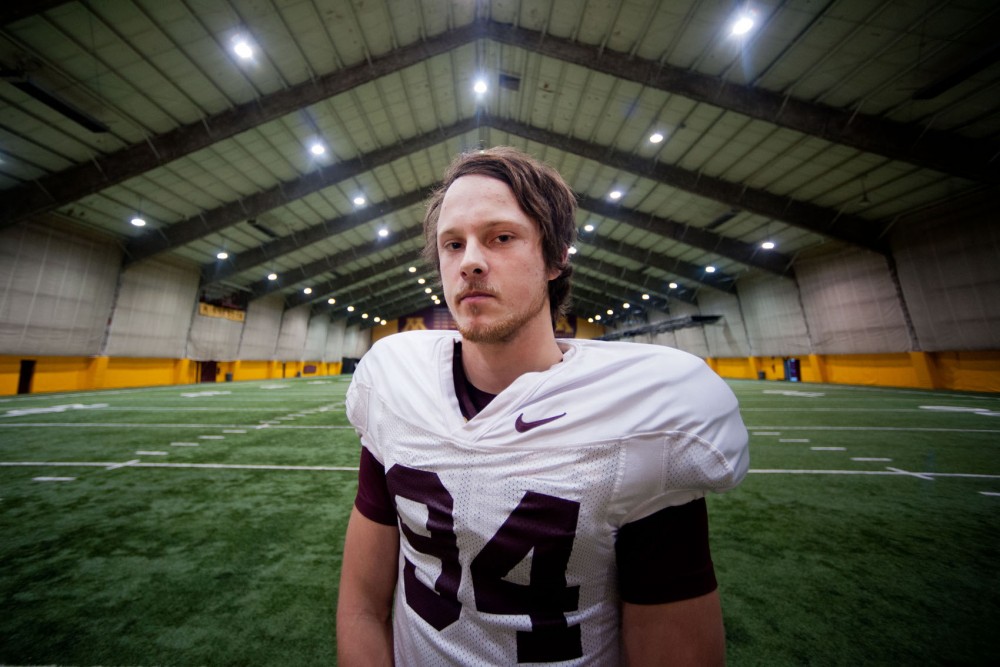 Minnesota punter Christian Eldred came all the way from Australia to pursue a college football career and a degree in economics. Eldred said the rules of Australian football, where kicking is the primary method of moving the ball, have given him an advantage as a punter.

Christian Eldred didn’t punt a football until he was 19 years old.

His first reps on the football field came fewer than three months ago.

“It hasn’t been a great deal of time,” he said with a chuckle in his Australian accent.

Eldred won the position as the Gophers’ starting punter with his efforts in fall camp and a strong performance against Nevada-Las Vegas in Minnesota’s first game of the season.

He has transitioned well to his new life in Minnesota, but his journey started nearly 10,000 miles away as a young chap in Australia.

Eldred played the Australian version of football for most of his life and has had to adapt to the American style in order to play at the college level.

He said he reached out to Prokick Australia, an institution in Australia that facilitates the transition of kickers and punters to American football, to prepare himself to potentially play at the Division I level.

Eldred said it started off as a minor aspiration, but once he saw the potential for a future with football, his interest started to grow.

“They helped me out with the paperwork and putting together some film and talking to some coaches and teams on my behalf,” Eldred said, “and that really helped.”

Nathan Chapman, co-founder of Prokick Australia, said Eldred entered the program with “a nice kick from an Australian point of view.”

“We had to tighten everything up so coaches could see that his technique would translate at the Division I level,” Chapman said. “We’re basically giving any program a junior-year level punter, but they are getting them as a freshman.”

In Australian football, the field is generally about 180 yards long and 150 yards wide and is shaped like an oval. The main way to advance the ball is with a punt. Some situations allow players to use their hands, but they must punch the ball in a certain direction to advance it — no throwing motion is allowed.

Chapman said because of the differences in style, an Australian punter’s strength is his ability to directionally kick the ball.

“They have to pass the ball with their feet sometimes 50 or 60 yards away, so they get pretty accurate with it,” Chapman said. “He is pretty comfortable when it comes to coffin-cornering punts.”

A coffin corner is a punt that is generally kicked out of bounds inside the 10-yard line, but at the college level, a punt is usually considered successful if it’s downed inside the 20-yard line.

He has faltered a little since the first game of his career and currently ranks ninth in the Big Ten with an average of 38.5 yards per punt.

“If you talk to any punter, one word is going to be consistency,” Eldred said, “and I need to be more consistent.”

Though he said he couldn’t be happier in Minnesota, Eldred wasn’t very active in the process of selecting the Gophers. Instead, Chapman and his staff planned all his visits.

“It was essentially up to them,” Eldred said. “They were the ones sending the emails and staying up late making the phone calls. I trusted them.”

Chapman said he’d been in contact with Minnesota special teams coach Jay Sawvel ever since Sawvel was at Northern Illinois.

Sawvel said their relationship has been good, but his squad has never needed to recruit a punter until last year.

“We knew Christian would fit in with the Minnesota program,” Chapman said.

Eldred paid for his own travel to visit the Twin Cities during spring practice last year and returned for an orientation in late July.

The Gophers started fall camp in early August, but Eldred’s student visa had not yet taken effect. He had to leave the country in that time, so he flew to Toronto until the paperwork was finished.

“Those are some little hurdles that an international guy like that has to go through … and that’s a testament to him,” Sawvel said.

It’s no secret that Minnesota has struggled on special teams in the past, and Sawvel said Eldred’s job isn’t secure yet.

“He can do better than what he’s done,” Sawvel said. “It’s still an open competition … and as long as he stays consistent, then we feel good with him.”

Eldred said one of the biggest factors in his decision to come to America was the chance to earn a college degree.

He briefly mentioned goals of playing in the NFL, but said he knows he has a long way to go before that goal becomes realistic.