Freshman ace exceeding even her expectations 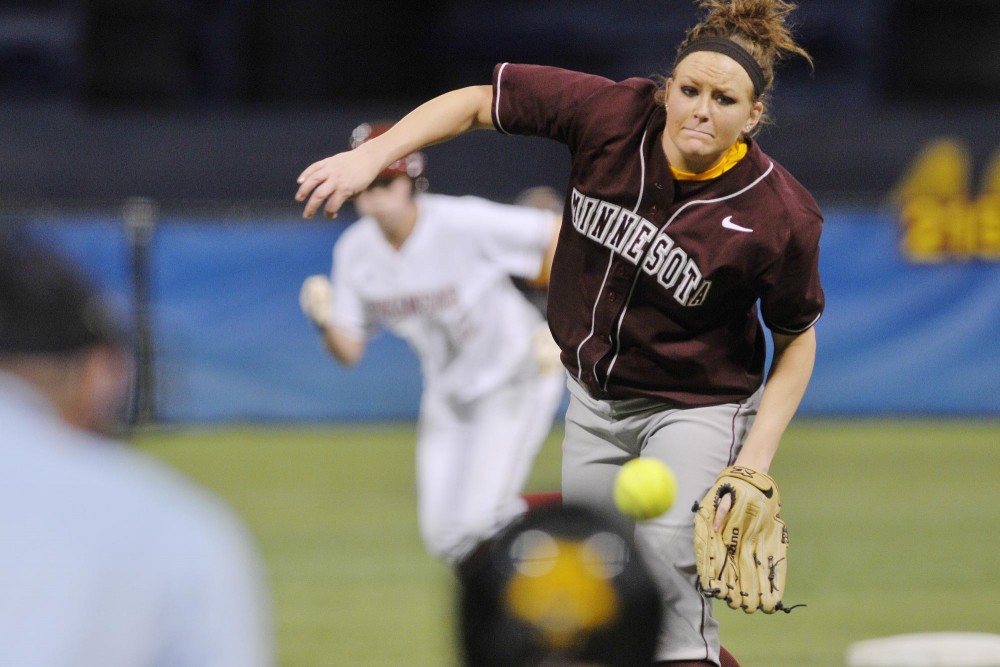 Following a great act isnâÄôt anything new for Lacey Middlebrooks. Coming from a Texas sports family, including an older brother playing professional baseball, the Gophers softball pitcher thrives on competition and believes in hard work, both of which helped her as she joined a team trying to fill a hole left by one of the programâÄôs best pitchers. Through the seasonâÄôs first seven weeks, Middlebrooks admits she has exceeded her own expectations. She leads the Big Ten in starts, wins and innings pitched and is second in strikeouts. Adding to that are 20 complete games âÄî including four shutouts and a no-hitter âÄî and all of the Gophers’ 15 wins this season. âÄúIâÄôm not saying I wasnâÄôt confident in my ability, but itâÄôs just a lot to take in âÄ¦ [as] a freshman coming in,âÄù Middlebrooks said. âÄúI can only keep working harder to keep moving up.âÄù Middlebrooks competed for years with her older brother, Will, who now plays in the Boston Red Sox minor league organization. She said they would often go with their father to practice hitting or pitching. âÄúYou had someone to fight with. You had someone to make you better,âÄù Middlebrooks said. Will Middlebrooks was a sports star at Liberty-Eylau High School in Texarkana, Texas and was drafted by the Red Sox in the fifth round of the first-year players draft in June 2007 . Lacey still had two years to carry on the familyâÄôs athletic success in high school. âÄúIt was almost a shadow, but we were so competitive that I didnâÄôt want to do anything but be better than him,âÄù said Middlebrooks, who led Liberty-EylauâÄôs softball team to the state championship game as a junior. But Middlebrooks was denied further high school success when she tore an anterior cruciate ligament and medial and lateral meniscus at the beginning of her senior season of high school volleyball. Reconstructive knee surgery and the subsequent recovery kept her from playing softball the following spring, and she played only eight games last summer. For the intense Middlebrooks, the experience taught her patience. âÄúIâÄôm not a patient person,âÄù Middlebrooks said. âÄúI think it took something drastic to make me realize that I can work harder âÄ¦ I realized what more hard work and patience will do for me, and when you work harder, you get more success.âÄù While Middlebrooks was working to get back on the field, the Gophers were playing their final season with ace Briana Hassett. Hassett set MinnesotaâÄôs single-season records for complete games and strikeouts in 2009 and finished her career with the most complete games in program history. Senior outfielder Heidi Carls, who entered the program in 2005-06 along with Hassett, knew this seasonâÄôs young pitching staff, including Middlebrooks and sophomore Alissa Koch, would have to carry the load. âÄúI knew that we were just going to have to let them know that they were going to have to work really, really hard and fill in some shoes,âÄù Carls said. Middlebrooks didnâÄôt need much of a reminder, Carls learned. âÄúShe works hard, she has a great mindset, sheâÄôs aggressive, sheâÄôs tough, sheâÄôs not going to let anybody walk all over her,âÄù Carls said. âÄúSheâÄôs kind of her own little breed. SheâÄôs very focused between the ears.âÄù Middlebrooks has started fast, but she still has room to become a great pitcher, according to Gophers third-year pitching coach Piper Marten, the programâÄôs all-time leader in games pitched, innings, wins and strikeouts from a career that spanned 2001 to 2004. Marten said Middlebrooks has succeeded by âÄúhitting her spotsâÄù and throwing two solid pitches âÄî a dropball and changeup. If Middlebrooks could develop another pitch each year, Marten said she could be even tougher on hitters. âÄúItâÄôs up to her,âÄù Marten said. âÄúI think if she stays consistent on the mound, mentally and physically, sheâÄôll be fine.âÄù Middlebrooks said she has been motivated by pitching in 14 one-run games, including six losses in such contests. So, what does she think will keep her rolling? âÄúHard work overpowers talent, overpowers getting a lucky hit or something,âÄù Middlebrooks said. âÄúHaving that intensity to want to get better.âÄù