Gophers bounce back with win over Michigan

Minnesota held the Wolverines to a .080 hit percentage. 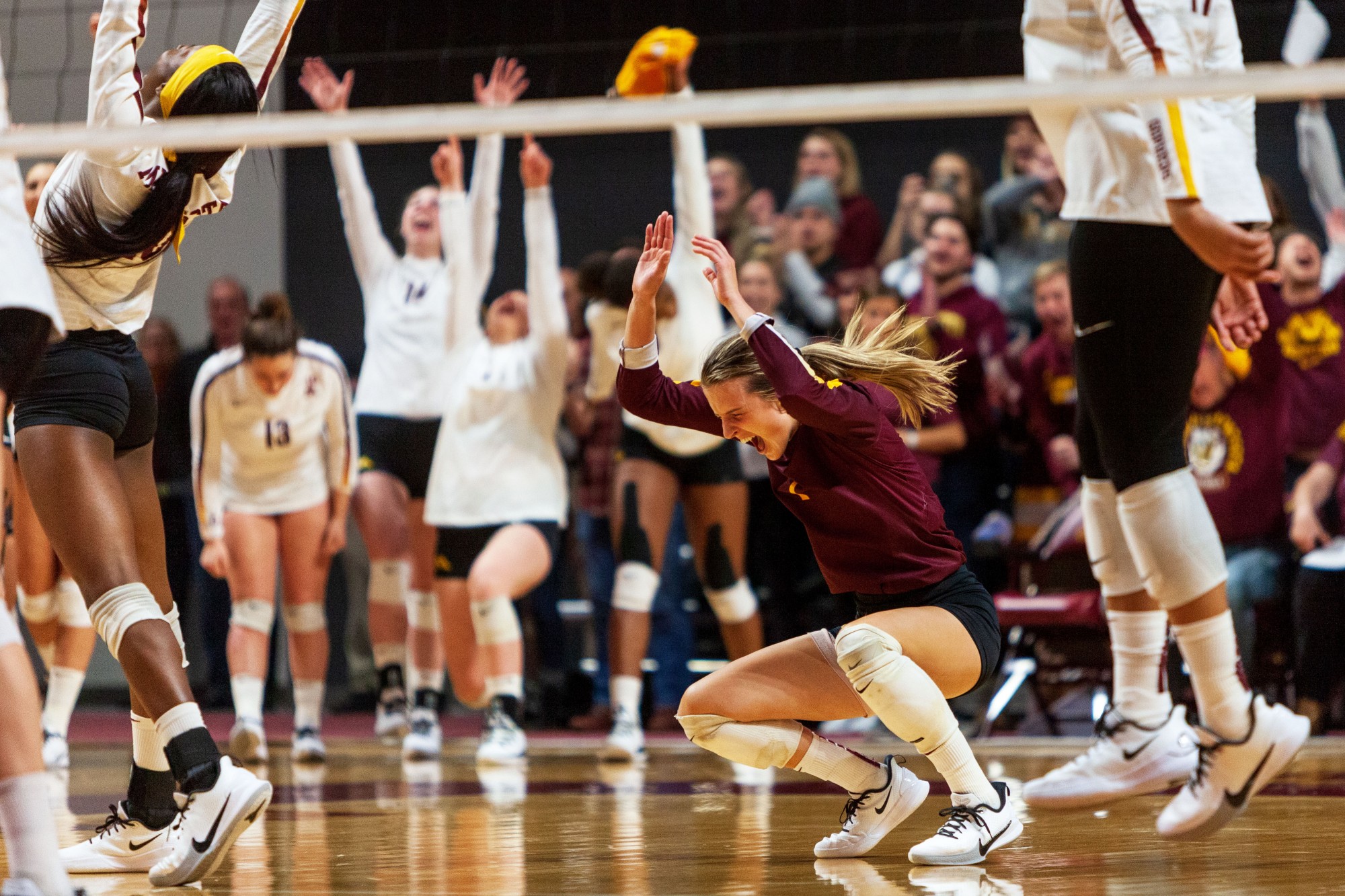 Libero CC McGraw celebrates a point at the Maturi Pavilion on Thursday, Nov. 14. The Gophers ended the night with a 3-1 loss against the Badgers.

Coming off their loss to No. 7 Wisconsin, the Gophers volleyball team rebounded Saturday with a decisive win over No. 23 Michigan.

The Gophers got the sweep: 25-21, 25-23 and 25-20. Initially it looked like it would be a difficult match for the Gophers. Michigan opened the match up 5-1, appearing to build momentum. Outside hitter Claire Sheehan answered, dropping back-to-back kills to cut Michigan’s lead to two. The Gophers continued to battle back from the early deficit. Middle blocker Taylor Morgan got back-to-back kills, the second coming off an overpass, giving Minnesota a 16-13 lead. The momentum continued to swing Minnesota’s way. They led for the remainder of the set until outside hitter Airi Miyabe closed out the first with a kill. The Gophers limited Michigan to a .021 hit percentage in the first set.

The Gophers carried the momentum into the second, taking an early 9-5 lead as Morgan and Miyabe stuffed a Michigan attempt. Michigan tied it at 12, but the Gophers pulled away again, pushing the lead back up to three as middle blocker Regan Pittman’s kill made it 17-14. Michigan tied it again at 20 and took a 21-20 lead on the other side of a Minnesota timeout. Tied again at 22, the Gophers were scrambling, getting the out-of-system ball to Morgan who pushed it over for a kill. Leading 24-23, Sheehan closed out the set and gave the Gophers the 2-0 lead.

Both teams went back and forth early in the third, but Minnesota was able to gain separation as a kill from Morgan put the Gophers up 11-9. Minnesota led the rest of the way. Morgan got her ninth kill of the match to put the Gophers up 18-16. Her nine kills were a team-high. She also added three blocks. Pittman stuffed another Michigan attempt for the solo block to get Minnesota to set point, and Sheehan closed out the match with a forceful kill.

“We got some good blocking certainly,” said head coach Hugh McCutcheon. “I thought back row defenders also did a good job. Michigan’s a very good team, so we did well to contain them a little bit, but they’re a dangerous team.”

Defensively, the Gophers were outstanding. As a team, they had 13 blocks and limited Michigan to a .080 hit percentage for the match. For Michigan, it was a rough night. They had an abysmal 30 attack errors and added five more errors from the service line.

“[It was] doing a good job with my pins and staying connected and communicating about where we see everything going, so we can connect and do what we got to do,” Morgan said about the Gophers’ success at the net.

The Gophers have another big matchup on Friday when they take on No. 6 Nebraska at Maturi Pavilion at 8 p.m.