The junior was the youngest member of the U.S. team in the 2014 Olympics. 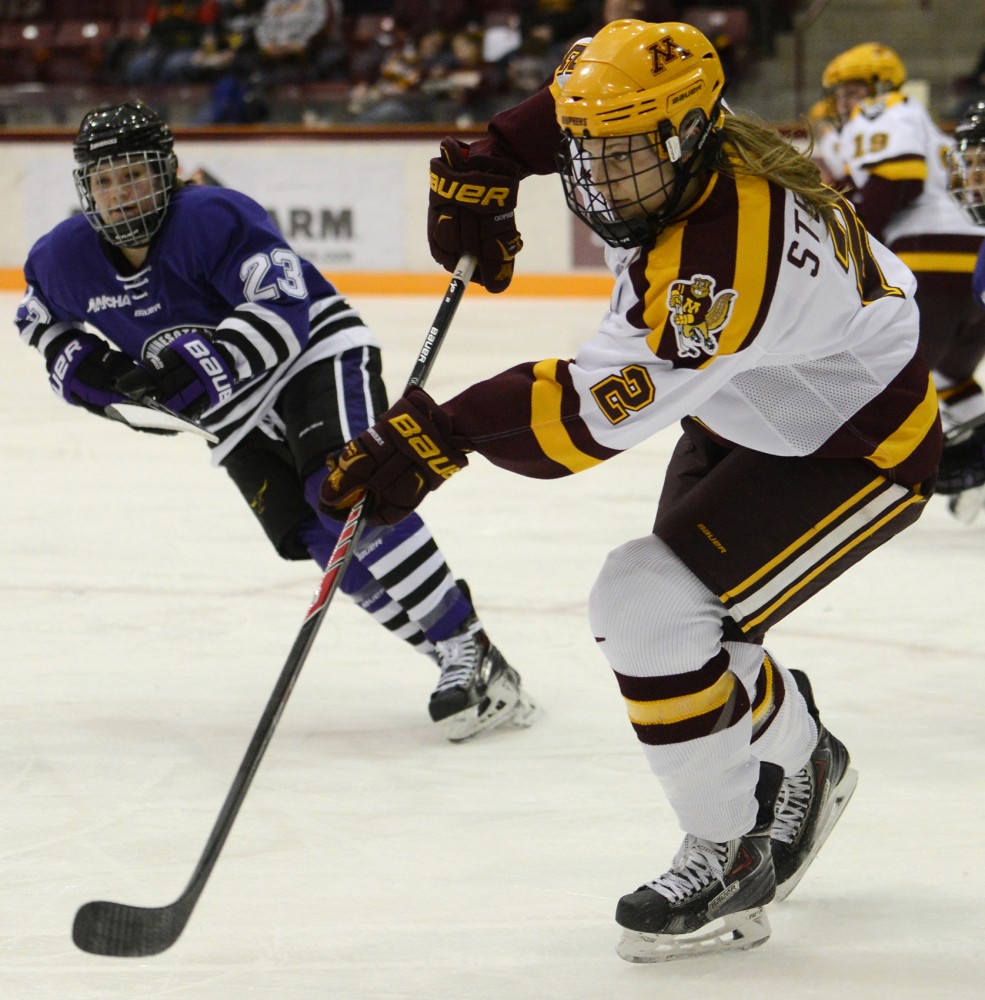 by Emily Polglaze
Lee Stecklein was the youngest member of Team USA when she won a silver medal with the women’s ice hockey team at the 2014 Olympic Games in Sochi, Russia.
The junior defenseman added a second national championship to her resume just more than a year later when the Gophers defeated Harvard 4-1 at the end of last season.
Stecklein went back to Team USA less than two weeks later for the International Ice Hockey Federation’s Women’s World Championship in Sweden and won gold in the event.
The Roseville, Minn., native has had plenty of championship experience in her hockey career so far, and now she’s using it to lead the Gophers as one of their captains.
“She’s just so consistent. She’s a rock for us,” head coach Brad Frost said. “She’s one of the best people you’ll ever meet.”
One of Stecklein’s first titles came in high school when she helped Roseville win a state championship in 2010. She was also heavily involved with USA Hockey in high school as a member of the U.S. Under-18 Select Team.
The defenseman came to Minnesota after graduating and appeared in all 41 games as a freshman, tallying three goals and nine assists.
The Gophers won the national championship that year, but soon Stecklein had her sights on a different kind of championship in Sochi.
“We had a tryout the year before, that February, and I was lucky enough to make that first cut,” Stecklein said. “I knew then that I wouldn’t be with the Gophers that year; I would train with the Olympic team out in Boston. So I moved out there, trained, played a lot of hockey, and I ended up making that final cut.”
Stecklein played in five games with Team USA in Sochi and recorded one assist. She was a part of a large University of Minnesota contingent on the team with Amanda
Kessel and alumni Megan Bozek, Gigi Marvin and Anne Schleper. Team USA fell to Canada in overtime in the gold medal game 3-2.
Soon after, Stecklein had to transition back to college after taking a year off.
“It was definitely an adjustment coming back to school and focusing on something else besides hockey,” Stecklein said. “But other than that, I came back to a family here.”
Stecklein was named an assistant captain for the 2014-15 season and scored 27 points in 40 games. She has 13 points in 18 games this year and is third in points among the team’s defensemen.
Stecklein has led the team’s defense as one of the captains, while the other captain, senior Hannah Brandt, leads the forwards.
“We’ve always been good friends, so it’s been pretty easy to work together,” Brandt said. “It’s easy to talk to her.”
Stecklein still has another full season remaining with the Gophers but also hopes to get another shot at a medal in the coming years.
“I’d love to go to another Olympics in 2018,” Stecklein said. “It feels like it’s coming fast, so in preparing for that, I think the Gophers’ program is one of the best ones to be with.”
Delete Image
Align Left
Align Center
Align Right
Align Left
Align Center
Delete Heading