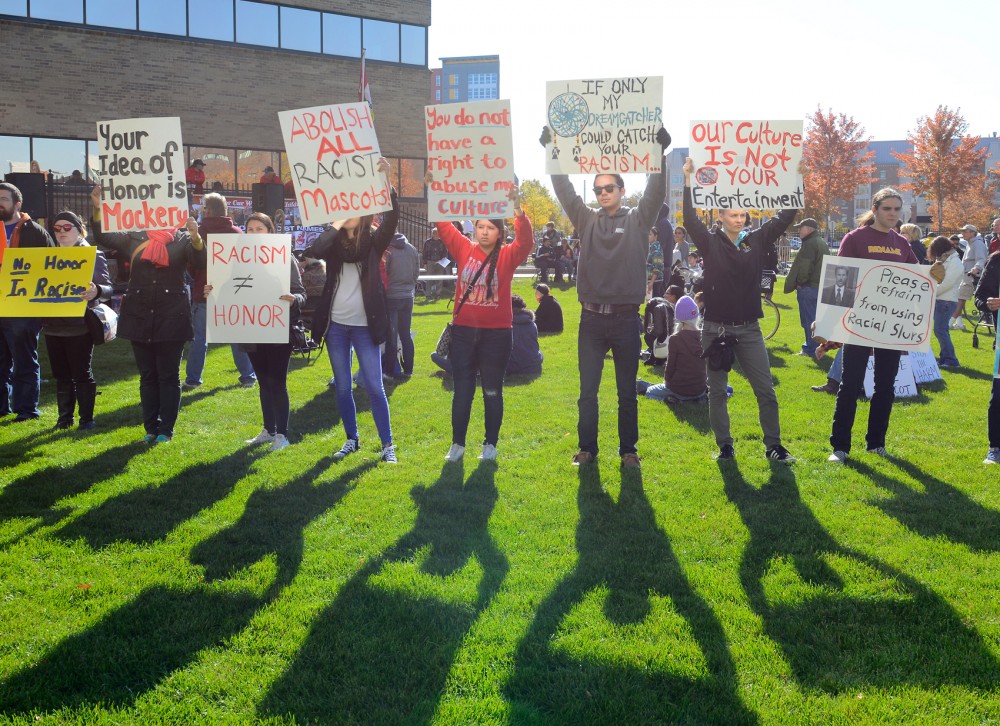 Demonstrators occupy the lawn outside of TCF Bank Stadium on Sunday morning. The demonstration took place to voice opposition against the team mascot of the Kansas City Chiefs during their game against the Minnesota Vikings.

Sadman Rahman
American Indian activists are continuing to push back against sporting teams they say are offending their culture.
To protest what they view as degradation of American Indian culture and history in mascots and team names, two American Indian advocacy groups hosted a rally Sunday in
front of the University of Minnesota’s TCF Bank Stadium before the Minnesota Vikings and Kansas City Chiefs game. Some fans say the team’s name isn’t racially charged.
The National Coalition Against Racism in Sports and Media — one of the groups that led the protest — has spearheaded team name changes at 3,000 high schools and colleges because the names were offensive to American Indian populations, said coalition founder Clyde Bellecourt, adding that NFL teams can be harder to persuade.
Last year, the NCARSM hosted a similar, although much larger, rally at TCF Bank Stadium to protest the Washington Redskins team name.
“We have an ongoing effort to hit them economically,” said Coalition Vice President Henry Boucha.
The traditions that Kansas City Chiefs fans perform both before and during games, like banging on drums and wearing feathered headdresses, can be offensive to indigenous people because those are sacred practices for some American Indian populations, Boucha said.
American Indian women and children primarily led the rally, and these are the populations Bellecourt said are most affected.
“Native American women have a unique issue when it comes to being portrayed as mascots,” said Norma Renville, coalition treasurer and operations manager for the American Indian Movement Interpretive Center. “They are dehumanized and over-sexualized.”
Renville said she thinks representations of American Indian women in media and sports have led to an increase in the sexual assault of native women by non-native men.
She also said she thinks children exposed to mascots and sporting tradition based on American Indian history suffer from depression, bullying and suicidal tendencies.
“We don’t feel honored. We feel disrespected,” Native Youth Alliance of Minnesota member Abel Martinez said to a crowd at the rally.
University American Indian studies and Law School alumna Tara Houska said she doesn’t think the University is doing its part to diminish racism in the community.
“I’d say the University is tolerant of racism,” Houska said at the rally, citing the school’s willingness to host sporting teams with controversial names.
Still, some fans, like Vikings fan Jason Schorr, think the issue should have been addressed at the time the teams were named.
“Are they looking for reasons to complain right now?” he said.
Delete Image
Align Left
Align Center
Align Right
Align Left
Align Center
Delete Heading