Demonstrators gathered Saturday afternoon to call for the reunification of families separated at the southern border. 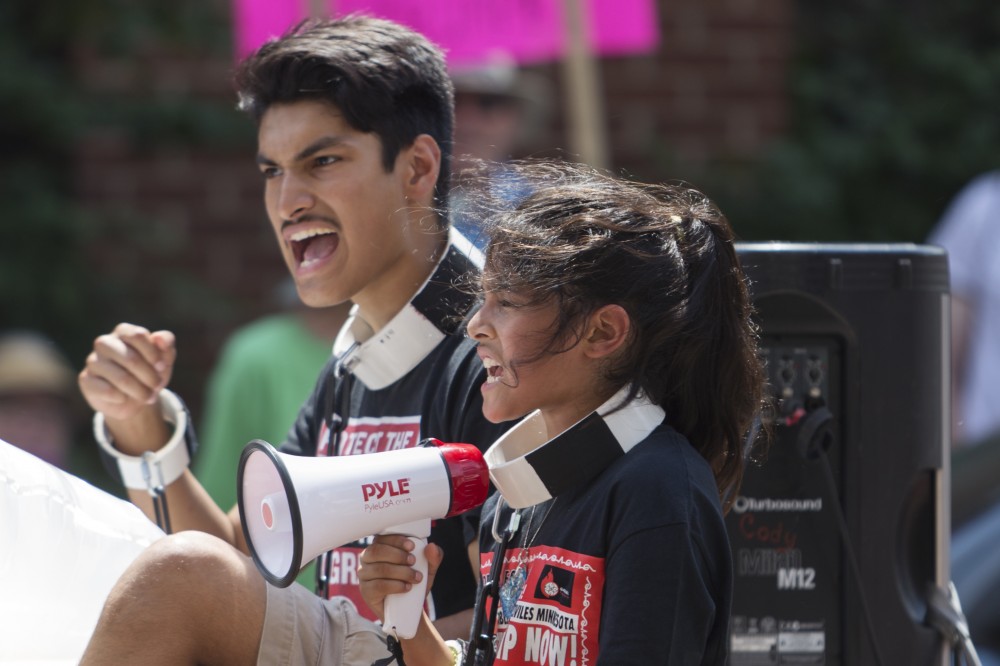 Float riders participate in chants at the "Free Our Future" march on Saturday, June 30 in downtown Minneapolis.

Thousands gathered in downtown Minneapolis on Saturday afternoon to protest a Trump administration policy that separated families at the southern U.S. border who had entered the country illegally.

The “Free our Future” protest was organized before the policy was reversed last week following criticism from both sides of the political aisle. The march was one of hundreds of demonstrations across the country Saturday afternoon calling for the administration to reunite families affected by the policy.

Attendants gathered in front of the Minneapolis Convention Center around 2 p.m. before marching through downtown, chanting phrases like “No hate, no fear. Immigrants are welcome here,” as they carried signs reading “Abolish ICE” and “Shut down Sessions.”

The sweltering heat and humidity did not deter demonstrators. Around 7,000 protestors of all ages were present as of 3 p.m., according to Minneapolis Police Department spokesperson John Elder.

“I am amazed at the turnout,” said Minneapolis resident Bekah Bailey, who attended the protest. The march was organized by groups such as Navigate MN, Black Immigrant Collective and the Council of American-Islamic Relations – MN.

Protestors stood on the light rail tracks blocking metro traffic during the march.

Light rail operation in downtown Minneapolis ceased for part of Saturday afternoon while the demonstrations occurred, according to Metro Transit. Following some delays, all routes were running again around 3:45 p.m.

“With my good conscience, I can’t celebrate the Fourth of July without doing my part [and] also talking about the things that are going on in our country that aren’t so great right now,” said University alumna Natalie Muench.

The demonstrators marched to Minneapolis City Hall and then headed back to the Convention Center.

Some children present wore emergency thermal blankets and some participants brought a fence cage, symbolizing the conditions of children that were separated at the border.

“I am here supporting the kids and the families that are being unjustly separated at the border,” said attendee Michelle Warneke. “We would like to see reunification happen immediately.”