Cedar-Riverside, Marcy-Holmes and Southeast Como have all seen a decrease in property-related crimes over the past month. 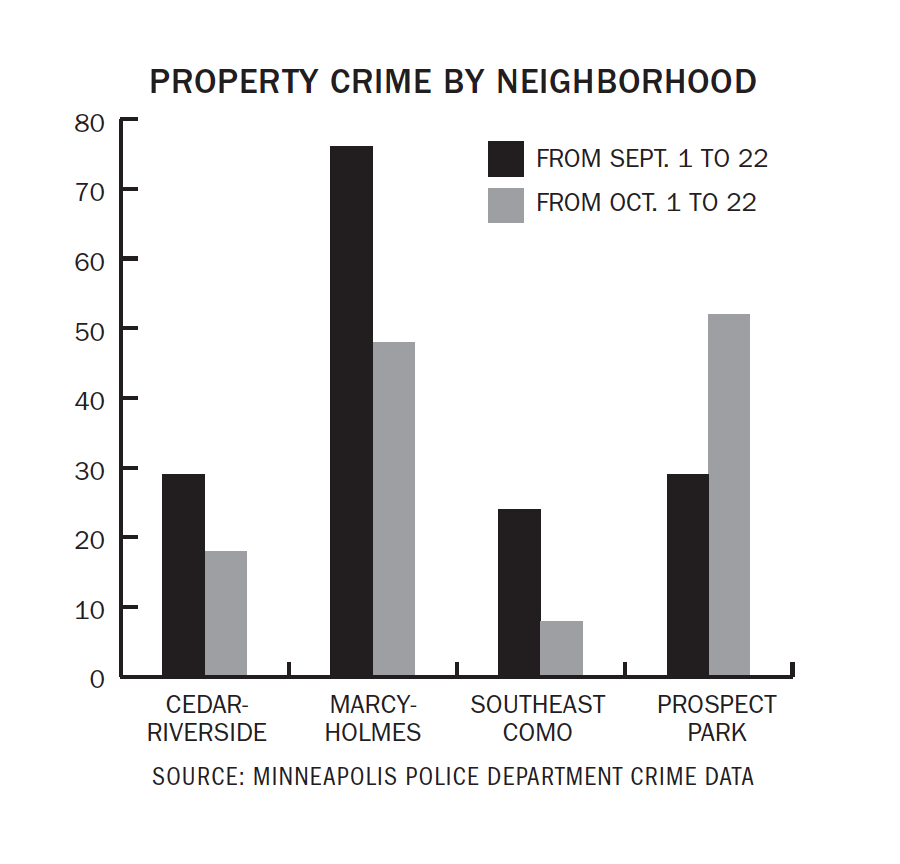 The past month brought a widespread drop in property crime in neighborhoods surrounding the University of Minnesota, according to Minneapolis Police Department data.

Prospect Park is the only University of Minnesota neighborhood to see an increase in property crime this month. Cedar-Riverside, Marcy-Holmes and Southeast Como have all seen a downward trend in property crimes since September, according to MPD crime data. Such crimes include burglaries, larcenies, theft from a motor vehicle, auto theft and arson.

On Oct. 12 at 8:25 p.m., a University of Minnesota Police Department officer responded to a fight that broke out in the Maroon Lot following the Gophers football game. The victim and his wife were walking through the lot when the male suspect started punching the victim in the face and body. Three bystanding men helped pull the suspect off of the victim before the suspect ran west toward 3M Arena at Mariucci.

No one on the scene knew the suspect, who the victim suspected was very intoxicated. A grounds worker speculated that the suspect may have assaulted the victim because he was wearing Nebraska apparel.

Also on Oct. 12, at 9:16 p.m., UMPD responded to a report of an assault near the Graduate Hotel. The victim later recounted that he was walking on the sidewalk outside of Starbucks when a male approached him, kicked him in the stomach and punched him on the top and back of the head. The suspect then entered the nearby Washington Avenue Parking Ramp.

As the suspect was exiting the parking ramp in a BMW, the victim slapped the back of his car. The suspect then reportedly exited the vehicle and chased the victim, punched him in the head three or four times and pushing him to the ground. Two people with the suspect reportedly taunted the victim, with one also recording the assault.

The victim went into the Graduate Hotel to call for help while the suspects followed him. The staff then ushered the suspects out of the hotel. Camera operators were unable to locate any video of the incidents.