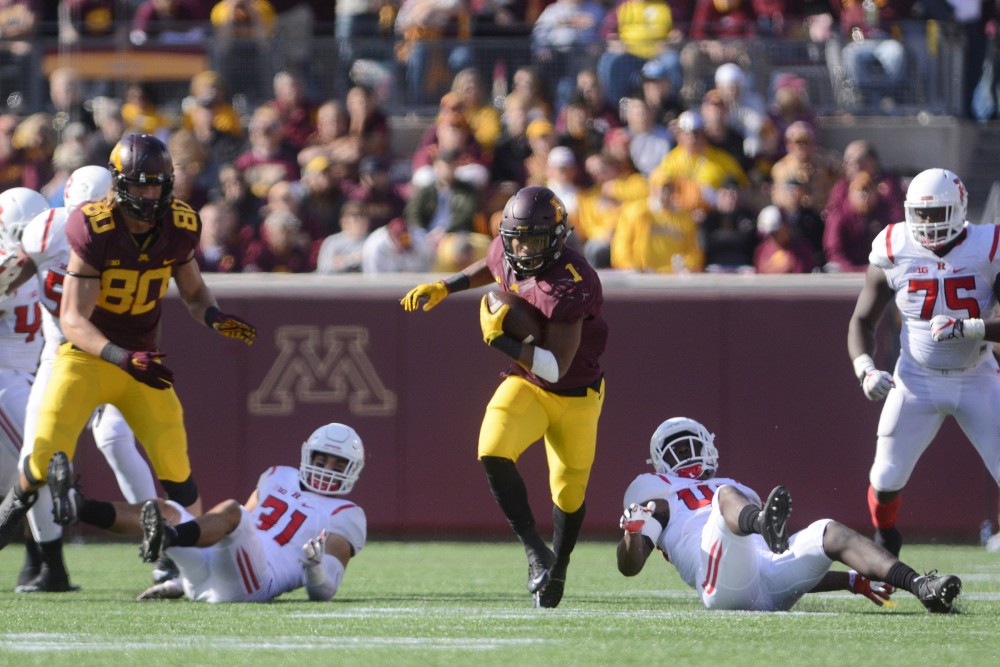 Gophers running back Rodney Smith leaves a trail of Rutgers defenders in his wake on Saturday, Oct. 22, 2016 at TCF Bank Stadium.

What should’ve been an easy game for the Gophers against Rutgers Saturday came down to Emmit Carpenter in the last minute of the game.

The redshirt sophomore scored a last-minute 28-yard field goal, and Minnesota’s defense hung on for six seconds afterwards to win the Gophers’ Homecoming game by a tight score of 34-32.

“Those kids battled back and made the plays we needed to make, and [Carpenter] missed the first field goal, but definitely made up for it on that last one,” said head coach Tracy Claeys. “So we’re thrilled to win, obviously, for homecoming weekend, and we’ll enjoy this one until midnight, and we’ll get started tomorrow.”

Senior Drew Wolitarsky gave Rutgers a chance and the Gophers a scare when he muffed a punt late in the fourth quarter. The ball was recovered by Rutgers senior Isaiah Johnson on the Gophers’ 23-yard line.

The turnover led to a Rutgers field goal and the Scarlet Knights’ first lead in the game.

The Gophers drove down the field in a 13-play, 59-yard drive afterwards, which ended with Carpenter’s game-winning field goal.

“[That] was my first [game-winner] to date,” Carpenter said. “It’s an exciting experience, and one that I’ll definitely not be forgetting anytime soon.”

The Scarlet Knights, who were down 21-10 at the half, came within one point of the Gophers in the third quarter. Redshirt senior Mitch Leidner threw an interception to Rutgers freshman Damon Hayes on a play where two receivers collided. Hayes returned the interception 55 yards for the score.

Leidner finished with 156 passing yards — his lowest total since the Sept. 1 game against Oregon State. The redshirt senior was cleared to play after missing the Oct. 15 game against Maryland with a concussion.

“Anytime you are sidelined with something, you want to get back at all costs, but [a] concussion [is] … a little bit unique because it’s not really something you can just play through,” Leidner said. “It was challenging for me because I felt like, through most of my career, I’ve been able to stay in games and play through different injuries like that.”

The momentum shifted Minnesota’s way when redshirt sophomore Rodney Smith ran a kickoff back for a 94-yard touchdown, his second of the game.

Smith was also the Gophers’ leading rusher with 111 yards.

“I’m always the type of guy to try to provide a spark for anybody that needs it with a big play,” Smith said. “Whether that’s on special teams or offense or making a catch, it’s definitely in the back of my mind.”

Sophomore Shannon Brooks was close to Smith in yards on the ground. Brooks had 87 yards rushing and scored the first touchdown of the game when he leaped into the end zone for a 1-yard score.

Brooks and Smith put up decent numbers, but the Gophers’ run game struggled in short-yardage situations. Minnesota went 6-14 on third downs and 0-2 on fourth downs.

“The [defensive line] was moving around on us,” Claeys said. “All of a sudden, they moved the front over real late, and the ball is snapped, and now you’re supposed to block somebody completely different, so we’ve got to look at our cadence.”

Rutgers scored more than seven points against a Big Ten team for the first time this season against Minnesota Saturday.

While the Scarlet Knights put up 32 points, they struggled to keep the ball. Redshirt junior Giovanni Rescigno made his debut start at quarterback and had three turnovers, with two interceptions and a fumble. He also had three touchdown passes and 246 total yards.

“We didn’t handle that lead for whatever reason,” Claeys said. “I think our kids had respect and worked awfully hard. … The way we come out of the gates, I did think we prepared well. [We’ve] got to sustain that throughout without a doubt.”