Across the cities, Minnesotans gather to remember

Sunday morning, the Minneapolis Police and Fire Departments, along with paramedics, gathered to be honored. 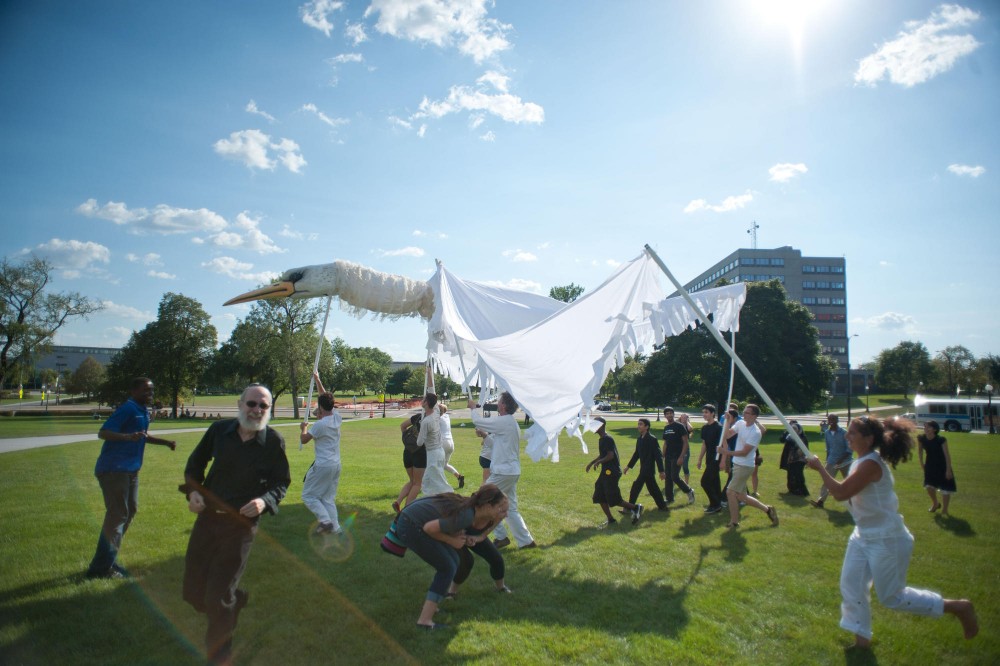 Minnesotans Standing Together 9/11 Memorial performers run around with an art bird around the State Capitol in St. Paul.

Two fire trucks stood on either side of the Minneapolis City Hall clock tower with their ladders raised, together draping a massive American flag that swayed in the cool morning air. The few clouds that drifted in front of the sun broke and streams of light hit the flag.
It was silent, save for the click-clack of 16 pairs of standard-issue police boots marching in unison across the Fourth Street asphalt. The serene blue sky was not unlike one exactly 10 years before.
This scene was the first in a Sunday series of Twin Cities memorials honoring the victims of Sept. 11 and the first responders that still go to work every day âÄî the attacks in the back of their minds.
Sunday morning, the Minneapolis Police and Fire Departments, along with paramedics, gathered to be honored by Minneapolis Mayor R.T. Rybak and U.S. Sen. Amy Klobuchar, D-Minn., among other distinguished speakers.
For Kevin Rousseau, Minneapolis Fire Battalion chief, Sept. 11, 2001 was âÄúvery personal.âÄù Rousseau had just finished work and went to the health club. It was there he heard of the attacks.
âÄúI heard the TV commentators ask one another why they could hear beeping at ground zero. When a firefighter stops moving for more than 45 seconds, an alarm sounds from his harness,âÄù Rousseau explained. âÄúAll firefighters know that sound. I heard the beeping. I knew they had all died.âÄù
Apart from servicemen and women, University of Minnesota students took part in the memorials. Students from the Interfaith Campus Coalition gathered on campus behind Coffman Union to talk and eat before going to the Capitol to watch and participate in the âÄúMinnesotans Standing TogetherâÄù memorial.
Three students from the coalition participated in the memorial âÄî Michael Mauer, Zehra Rizvi and Bryna Godar, Jewish, Muslim and Christian, respectively, they all came together. Ten years ago they were in different places.
Mauer was sleeping in his bed in Anchorage, Alaska, unaware of the events until his parents woke him in the wee hours of the morning. âÄúI couldnâÄôt focus the whole day. I went to school but I couldnâÄôt think.âÄù
A sixth-grader at the time, he thought for the first time, âÄúthe world is real.âÄù
Rizvi was in seventh-grade English class. Her teacher was laughing at a joke when there was a knock at the door. She answered, still laughing, and the math teacher whispered something to her.
âÄúI knew something was wrong. She stopped smiling right away,âÄù Rizvi remembered.
Godar was left in the dark. âÄúGirls Scouts was canceled. ThatâÄôs all I knew. They wouldnâÄôt tell us anything.âÄù She wouldnâÄôt hear about the attacks until her parents picked her up from school at the end of the day.
The three students all came from different backgrounds, different religions and different cultures. On Sunday they came together on the steps of the Capitol in St. Paul to read the poem âÄúWe Remember Them,âÄù together.
âÄúI understand it now,âÄù Mauer said. âÄúWhen we were kids, everyone was so worried, and I didnâÄôt fully understand why.âÄù
âÄúThis memorial is great, but I remember we didnâÄôt have this right after,âÄù Rizvi said. âÄúIt was very different for me. My parents wouldnâÄôt let me walk home from school.âÄù But Rizvi said a lot has changed over 10 years âÄî for her and the country. âÄúI know I am an American now, not an outsider.âÄù
The Capitol steps filled with diversity. Participants spoke in Spanish and Arabic. They dressed in brightly colored robes and milk white dresses. They wore kippahs and hijabs and read from Bibles and Qurans. Community members, from Gov. Mark Dayton to the Archdiocese of St. Paul and Minneapolis, John C. Nienstedt, came to the steps.
Community leaders of various religions also crowded the Capitol steps to participate in songs, readings and speeches.
Some teared up. Others seemed uplifted.
The Capitol rang with songs from Woodie Guthrie to Brother Ali.
âÄúI was very big on this, there were members from every part of the community,âÄù Ali said.
âÄúIn times like this, our community can use these events as a catalyst to fall apart or a catalyst to come together.âÄù