Since losing two straight in California against Oregon and Stanford, the Gophers haven't lost a set in six matches. 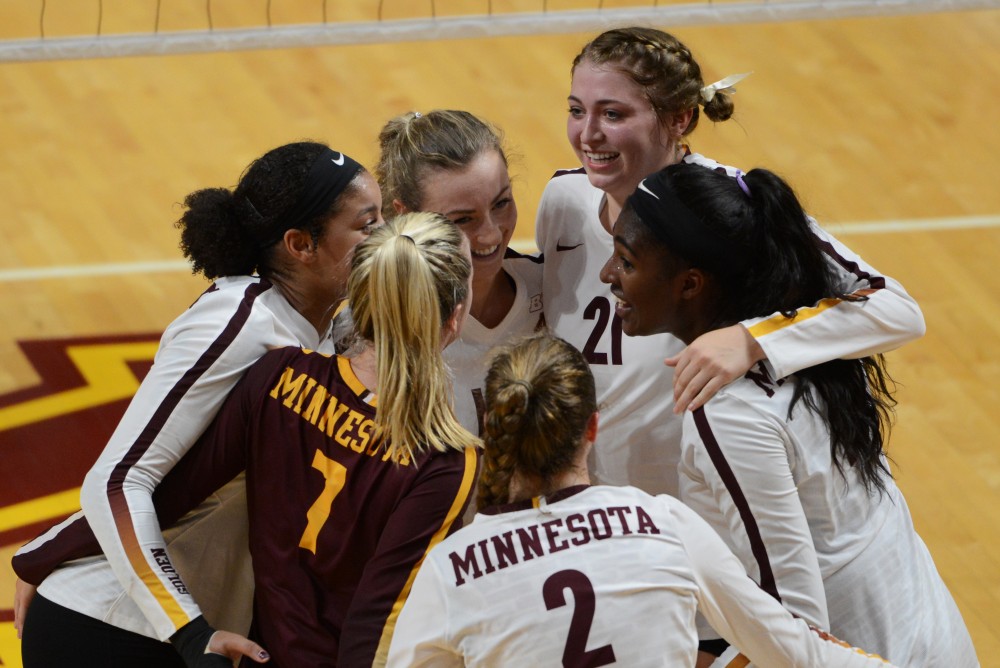 Gopher volleyball players celebrates earning a point on Sept. 13 during the game against Green Bay at Maturi Pavilion.

The Gophers have opened Big Ten play this season by winning five straight, including a win over No. 6 Wisconsin.

In the opening set the Wildcats took an early 3-0 lead but the Gophers came back firing and tied the match at 5-5.

When the set was tied at five, the Gophers’ went on a 7-1 run, putting the score at 12-6. The run was a team effort, with four different Gophers contributing points. Redshirt sophomore middle blocker Regan Pittman had three kills during the run.

“She’s an amazing player and really knows how to dominate the net,” Morgan said.

Minnesota extended their lead to 20-12 and looked to close out the set when Northwestern fought back.

Although Northwestern scored 7 of the last 12 points, the Gophers took the first set 25-19. Freshman opposite hitter Adanna Rollins and Pittman led the Gophers with 4 kills in the set.

The Gophers took an early 4-0 lead in the second set, but the Wildcats didn’t stand down. Northwestern ended the Gophers’ run and it was back-and-forth from there. The Wildcats fought back to make the score 10-9, but the Gophers went on a 5-2 run to extend the lead to 15-11.

Morgan would have three kills throughout the run and McCutcheon said she has been working to improve her offensive game.

“Certainly, her timing and her ability to be available has gotten better,” McCutcheon said.

Morgan led the Gophers in the second set with six kills.

In the final set, everything went the Gophers’ way. Minnesota took a commanding 10-3 lead through two kills by sophomore Stephanie Samedy, a few attacking errors by Northwestern and a service ace by freshman libero CC McGraw.

The Gophers extended their lead to 18-9 after a total team effort and two services aces.

Although Northwestern again tried to bounce back, it wasn’t enough to surpass the Gophers as they would take the final set 25-15.

Morgan let the Gophers for the second consecutive match with 12.5 points off 11 kills while hitting .562 percent.

Pittman had 11 points off of eight kills and had four blocks. The Gophers also had nine service aces on the night.

The Gophers will travel to Lincoln, Nebraska to take on No. 3 Nebraska on Saturday. Pittman said the preparation is the same regardless of the opponent.

“We treat every opponent as the same so it’ll always be intense at practice,” Pittman said.