Sara Groenewegen was drafted this year second overall in the National Pro Fastpitch league by the Akron Racers. 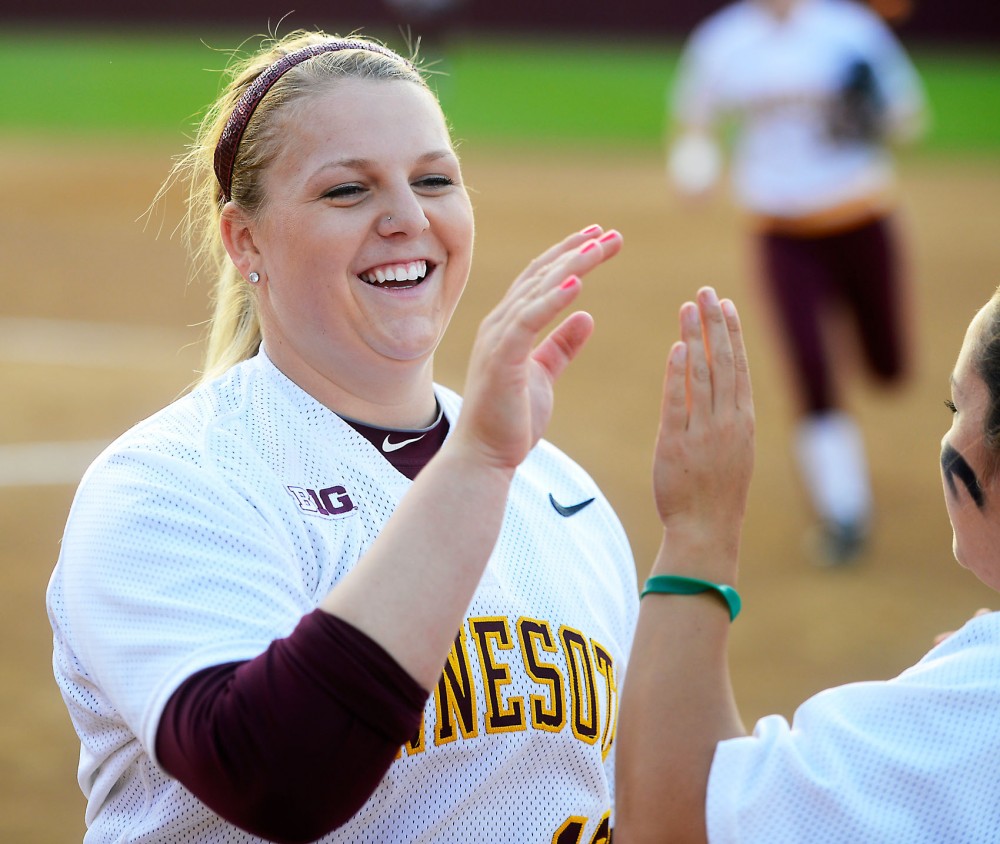 Sara Groenewegen high-fives her teammates while returning to the dugout at the Jane Sage Cowles Stadium on May 5, 2015.

Though her time with the Gophers is up, Sara Groenewegen is far from finished with fastpitch softball.

In the 2017 National Pro Fastpitch Draft in April, Groenewegen was selected second overall by the Akron Racers. She is sharing her time this summer with the Racers and the Canadian women’s national team. She has played for her country since 2013.

“It’s tough competition,” Groenewegen said. “I definitely think the NPF is a lot tougher competition … But there’s no other feeling like playing for your own country.”

Groenewegen is leaving the Racers for the Canada Cup this week. The annual tournament features more than a dozen international women’s softball teams and is played in Surrey, British Columbia, a town that borders White Rock, her hometown.

“We don’t have a lot of players who play professionally, but for those that do, there is an expectation that they’ll be available for us,” said Canadian women’s head softball coach Mark Smith. “[Groenewegen] made playing for her country the priority that she always has.”

Team Canada will play the Akron Racers on Aug. 1. Groenewegen said she is unsure which team she’ll be on when the two square off.

The Akron Racers are 14-13 currently, third in the six-team NPF league. Groenewegen has pitched 30 innings with a 5.37 ERA and a 2-5 record for the Racers. She has a .083 batting average with Akron.

“I think that I struggled a bit at first,” Groenewegen said. “I came off a season where my team rode me, so, I mean, I was tired … I’ve won two of my last starts so I feel like I’m finally settling into my roll.”

Racers’ head coach, Charlotte Morgan, said the slow start for Groenewegen could have been her realizing the caliber of hitters she faces now.

“It’s her realizing that these hitters are really smart and they know what they’re looking for,” Morgan said. “I think she’s understanding it, getting more comfortable. I don’t think she was so comfortable when she first got here.”

Groenewegen plans to come back to the University in the fall to finish up her degree, she said.

“I’m just going to continue my education as long as I can and hopefully stick with softball as much as I can,” she said.