Amanda Tatro died a week after losing her case at the Minnesota Supreme Court. 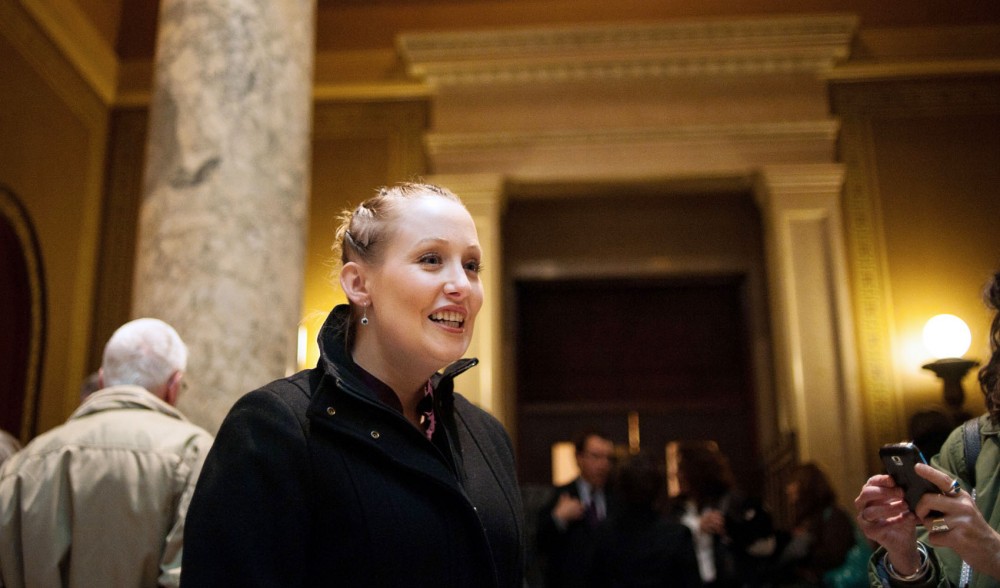 Former University mortuary science student Amanda Tatro speaks to reporters after the ora arguments in her case against the University on Feb. 8, 2012 outside the Minnesota Supreme Court. "I hope that I’ll finally get closure to what I didn’t start and that the University will finally leave me alone," Tatro said.

Amanda Tatro, who fought the University of Minnesota over punishment it imposed on her over Facebook posts, was found dead Tuesday morning. Her death comes less than a week after she lost the high-profile free speech case at the Minnesota Supreme Court. She was 31.

The court unanimously ruled last week that the University didn’t violate Tatro’s free speech rights when it sanctioned her for Facebook status updates about her mortuary science lab.

Civil rights advocates shared a sigh of relief, however, because the state Supreme Court’s June 20 ruling narrowed the conditions under which the University can sanction speech compared to the Court of Appeals ruling in the Tatro case earlier.

Tatro’s husband found her Tuesday morning. He said he didn’t know the cause of death and was waiting for an autopsy report.

Joel Rand, Tatro’s husband, said she was a fighter, both in court and out of it.

She was a second-degree black belt.

And when she felt she was wronged by the University, she fought to make it right, he said.

“Especially if she was wronged or perceived that she had been wronged, she would fight tooth-and-nail,” said Rand, who married Tatro last September.

Rand criticized how the media seemed to portray Tatro as a “crazy monster,” taking the Facebook quotes out of context.

She was one of the sweetest people he ever met, Rand said.

He shared other parts of her life, besides the case that defined her to many.

She loved her animals: a bloodhound, cat and a lizard, and had just taken up gardening.

“Every time we turned around we were going to Home Depot, and she was buying seeds,” he said.

Tatro was working at a funeral home in south Minneapolis and was excited about her future career, Rand said.

“Me, funeral service and her animals,” Rand said.

Tatro had a central nervous system disorder, her lawyer wrote in a legal brief leading up to the case. It’s unclear whether it had to do with her death.

Frank LoMonte, executive director of the Student Press Law Center, which followed Tatro’s case closely, said her perseverance in the legal battle said a lot about her.

Tatro appealed a student conduct committee’s decision to punish her to a University vice president and continued that fight until she got to Minnesota’s highest court.

Her lawyer, Jordan Kushner, said she was considering appealing to the U.S. Supreme Court after last week’s state ruling.

The Minnesota Supreme Court acknowledged concerns over free speech in its ruling, which nevertheless upholds punishment to Tatro for the controversial Facebook status updates in 2009. Tatro said the posts — like comments about wanting to “stab a certain someone” with a mortuary science tool — were just a way of venting after a breakup, she told the Minnesota Daily in February.

Over the course of a month in 2009, she posted status updates about getting to “play, I mean dissect, Bernie,” her assigned cadaver.

She said “Bernie” was a reference to the movie “Weekend at Bernie’s.”

The University and the police didn’t find it funny.

One faculty member was physically shaken by the posts, and others felt threatened; police investigated but didn’t find that Tatro had committed a crime. The saga had only begun, though, as the University’s student behavior committee looked into the incident and said it violated both the student conduct code and the Anatomy Bequest Program rules.

The University flunked Tatro from a laboratory class and required her to enroll in an ethics course, formally apologize to faculty and undergo a psychiatric evaluation. The University said it needs the right to discipline students in cases like Tatro’s to enforce the professional ethics students must learn to be successful.

Supreme Court Justice Helen Meyer wrote in the court opinion that the University didn’t violate Tatro’s rights because the academic program rules she violated were specific and related to established professional conduct standards.

Leaving the ruling any broader could allow a university to employ “overbroad restrictions that would impermissibly reach into a university student’s personal life outside of and unrelated to the program,” Meyer wrote.

The inability to enforce the policies Tatro violated would be problematic, Angela McArthur, director of the University’s Anatomy Bequest Program, told the Daily earlier this year.

“We’ll have to rethink what we do and how we do it,” she said of her program, which deals with the sensitivities of people who decide to donate their bodies for educational purposes, like the Mortuary Science program. “I think this is cut and dry.”

In a brief supporting the University in the case, Minnesota State Colleges and Universities warned that student misconduct in other professional training programs, like disclosing medical information or facts about a current criminal investigation, can also be a concern.

General Counsel Mark Rotenberg said the University is “very pleased” with the ruling and will consider incorporating it into the codes of conduct for professional programs, or even the general student conduct code.

“There are a lot of programs” where the University could apply this decision, he said, like medicine, law and teaching.

The greatest risk, he said, is if the ruling is used too broadly and that any “unprofessional” speech becomes punishable.

“That’s not what the court said, and I hope that colleges clearly understand their limits.”

Medical and mortuary science professional organizations supported the University in the case, while civil liberties groups backed Tatro. In the months leading to the oral arguments, both sides told the Daily that the ruling would have consequences that reached further than a single college campus.

Kushner said he’s not happy with the decision but that it’s “a substantial improvement” over the Court of Appeals decision.

If that ruling stood, universities would have more leeway in punishing off-campus speech.

“It could’ve been far, far worse given what the University was trying to accomplish,” LoMonte said.

The high court could’ve chosen to extend a well-known precedent restricting high school speech, from the Hazelwood v. Kuhlmeier case of 1988, to a professional student’s Facebook posts. But Meyer wrote that that “would give universities wide-ranging authority to constrain offensive or controversial Internet activity.”

LoMonte called the Minnesota Supreme Court decision a “bit of a split-the-difference ruling.”

“The University got the outcome it wanted but didn’t get anywhere near the authority it wanted.”

Rotenberg denied any effort by the University to compromise students’ free speech rights.

LoMonte said oftentimes students in these cases will give up rather than keep appealing.

“It takes a really extraordinary person to keep fighting for what’s right,” he said, “instead of just throwing in the towel and moving on.”

He said Tatro’s fight “is a great tribute to her personal fortitude and determination that she kept fighting for what’s right.”