Todd Oakes has returned to the Gophers baseball team after his battle. 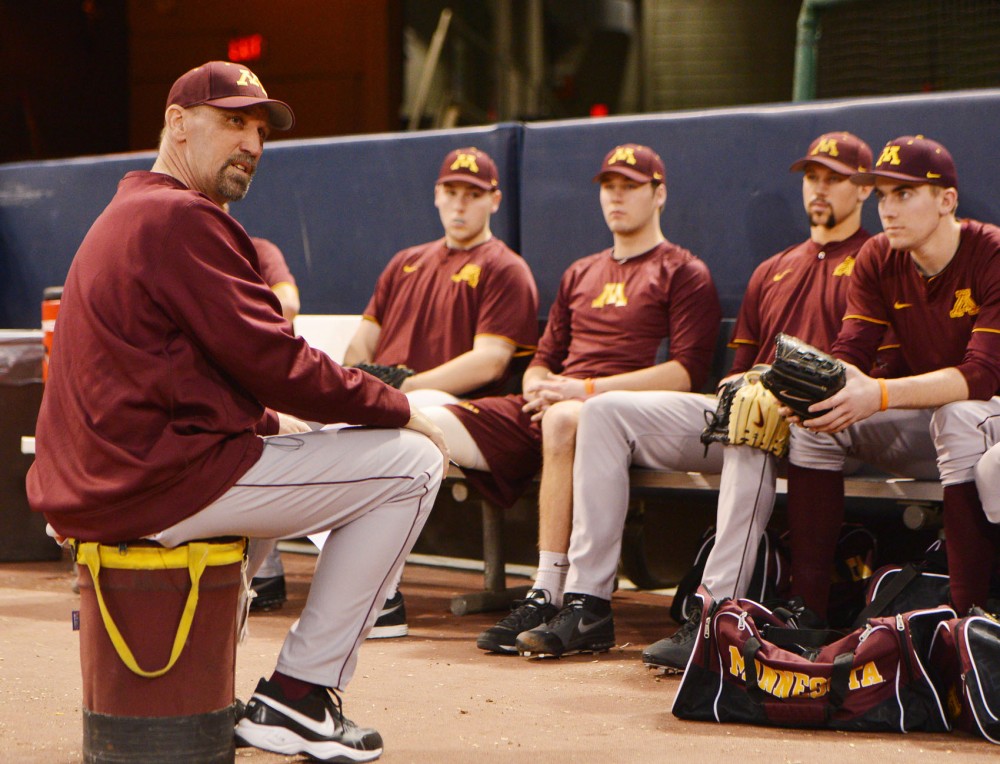 Gophers pitching coach Todd Oakes speaks to his players at practice Monday, Feb. 11, 2013, at the Metrodome.

Walking up the stairs was tough. He always wanted to sit down. He was “extremely fatigued” all the time.

“You go through the season, and you always get run down,” said Oakes, 52. “But it got to a point where I knew there was something more going on.”

He didn’t expect that something to be acute myeloid leukemia — a cancer of blood and bone marrow cells.

The life-threatening illness zapped Oakes of his physical strength and kept him in a hospital bed for months.

But it didn’t break his spirit or dim his positive attitude.

Now, more than eight months since Oakes was diagnosed, his cancer is in remission, and he’s back to coaching.

“Instead of being one of the people that said, ‘Why me?’, I kind of took the approach ‘Why not me?’” he said.

“What excludes me from getting leukemia?”

Todd Oakes said the draft took precedence over his health, which is why he waited to see a doctor until after the college baseball season and draft.

“Most males are stupid and stubborn. I’m definitely both of those,” he said.

Doctors ran a series of tests based on Oakes’ symptoms and found his blood-oxygen levels were abnormally low.

The next day, doctors called him to the emergency room and told him he’d be in this for the long haul.

“I knew it was something, but I never imagined it was leukemia,” said Oakes’ wife, Terri. “You never think it’s going to be you that’s going to hear that your spouse has cancer.”

Oakes began treatment the following week under the care of doctors at the University of Minnesota Medical Center.

He was initially treated with a few rounds of intravenous chemotherapy. He said doctors were happier with the results of the second treatment than the first, but the whole process was brutal.

“If my wife wasn’t there to force feed me, I probably wouldn’t have eaten.”

Oakes, who normally weighs about 230 pounds, said his weight fluctuated and at times dropped to 190 pounds.

Despite the grueling nature of treatment, he said the days went by fast. Oakes worked on the computer and watched a lot of television.

He also started his own website through CaringBridge, a nonprofit foundation that offers free websites to people with serious medical conditions.

Journaling on CaringBridge was “great therapy for me,” Oakes said. He posted updates about his condition and offered encouraging words for visitors. His CaringBridge profile has more than 50,000 hits.

Oakes was met with what he described as “overwhelming support” during his hospital stay. He reconnected with many people from the baseball community, including former teammates, coaches, players he coached and Big Ten umpires.

“There were times when I asked myself, ‘Are there really this many people that care about me?’” Oakes said.

Oakes soon settled into a steady routine filled with visitors, journaling and tests.

“Every time they came back with blood counts, that was the big news of the day,” Oakes said. “It took longer than they anticipated to get my counts back up.”

In mid-August, after 50 days in the hospital, he was finally cleared to go home.

But his homestay wasn’t permanent. He needed a bone-marrow transplant to complete treatment, so he checked back in to the hospital in early September.

“I was in no hurry to get back in [the hospital] even though I knew the transplant was inevitable,” Oakes said.

Doctors matched Oakes with his brother for the donation, and the transplant was successful. He spent 30 more days in the hospital before going home for good in mid-October.

Most Gophers baseball players competed in various summer leagues throughout the Midwest after the college season. But when news broke of Oakes’ illness, they rallied together.

“It hit the pitchers hard,” senior reliever Billy Soule said. “We all stayed in touch this summer and texted each other and made sure everyone is OK.”

When the team began fall practice, Oakes’ oldest son Tyler, who was brand new to the coaching staff, handled the pitchers in his absence. Tyler Oakes pitched for the Gophers from 2006-09.

Tyler Oakes said the players handled his dad’s absence well and stayed focused, which made the coaching transition easy.

Terri Oakes said Tyler’s presence around the team took a lot of pressure off Todd.

“Tyler was willing to do whatever he could to help his dad. I think this is the best thing,” Terri said. “Tyler knows what he’s doing, so it helped [Todd] get that time to heal.”

Anderson said he tried not to bother Oakes, but the two still spoke semi-regularly.

“He wanted us to go about our work, do our jobs and not worry about him,” Anderson said. “His inspiration, his attitude, the way he handled it made it easier on all of us.”

Oakes’ road to recovery was difficult. He said he spent a lot of time on the recliner and stayed off his feet.

By mid-December, he started to get antsy. Still, he hadn’t coached in months and wasn’t sure if he’d be ready.

The Gophers’ three-day December baseball camp was coming up, though, and with his cancer in remission, he pegged that out as a perfect trial run.

“When T.O. came back … everyone was excited,” Soule said. “Everything is back to normal now, having him around.”

Oakes coached the first two days and stayed home the third day due to fatigue. But he was confident that he’d return for the first day of practice Jan. 25 — and he did.

Tyler Oakes said he never doubted his dad would make a recovery.

Todd Oakes still has to take a day off here and there, and he said he’s not sure if he’ll travel to Los Angeles for Minnesota’s first series of the season against UCLA.

He said a full recovery could take up to a year, but he’ll be with the team for most of the season.

When he’s not with the team, Tyler will handle his duties.

“I’m a coach. This whole thing gave me the chance to walk the talk a little bit,” Todd Oakes said. “I don’t know if I was that great at coaching myself. I’d rather coach other people.”