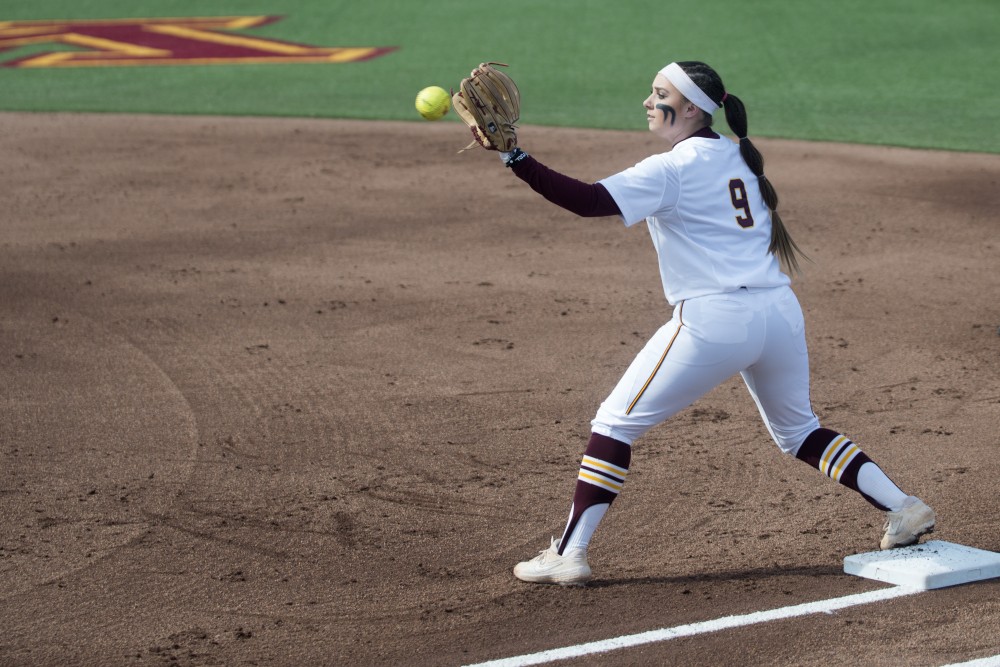 Infielder Hope Brandner catches the ball for an out on Friday, March 29 at Jane Sage Cowles Stadium in Minneapolis. The Gophers beat the Purdue Boilermakers 5-1.

Brandner hit two home runs and drove in three runs on Sunday as the Gophers swept the Boilermakers this weekend. Brandner hit multiple home runs over a weekend for the first time since March 1.

Brandner’s first home run of the series came off Purdue pitcher Sydney Bates in the fourth inning of game one of Sunday’s doubleheader. The drive to deep center field was Brandner’s eighth of the season.

Her second home run came in the first inning of the second game of the doubleheader off Maddie Damon. The ball hit the Jane Sage Cowles Stadium scoreboard and bounced back into play, but it was called a home run. Brandner also hit an RBI single in the fourth inning of game two. It was her 36th RBI of the season.

Brandner said it meant a lot for her to play in front of Minnesota’s fans.

“Everybody here was supporting me and being awesome,” Brandner said. “It was fun to play in front of them for the first time. My family was here. It’s always so much fun.”

“You can see the way she’s carrying herself,” Trachsel said. “She played well on both sides of the ball, mature at-bats, being disciplined and taking her walks. We like the completeness of this weekend, not just the long ball, minimizing the strikeouts, putting the ball in play, and then being able to go out and play good defense and make plays for us and the pitcher. That’s all you can ask for out of a player. She’s done a good job at a high level.”

Brandner said this weekend will help her as Minnesota enters the home stretch of its regular season.

“Hopefully, it gives me some good momentum but also [I] try and stay composed and confident, not trying to do too much,” Brandner said.