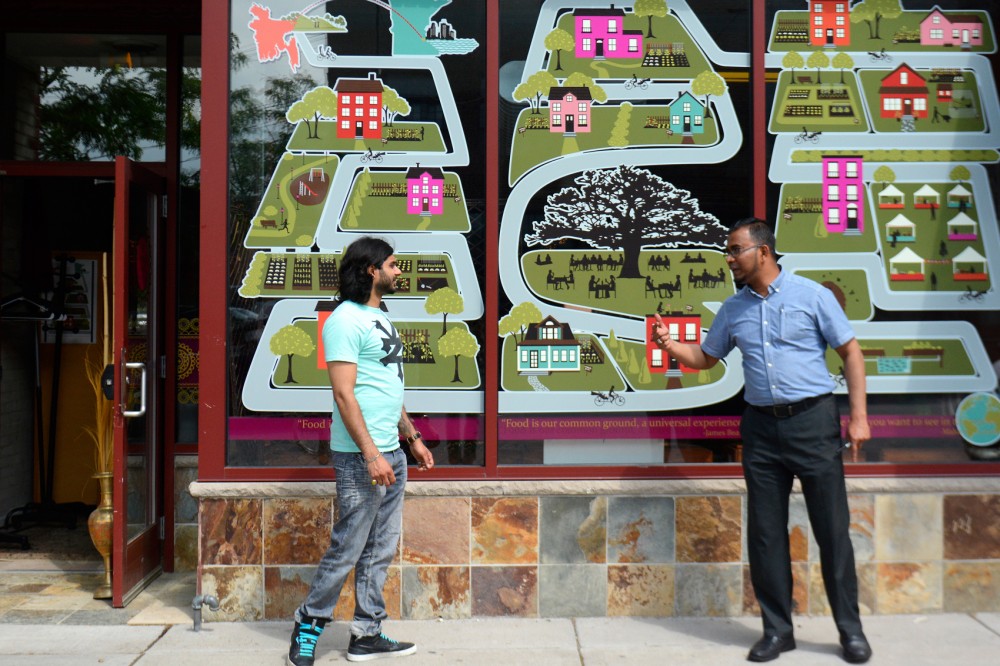 Muhammad Jiwa and Ruhel Islam speak outside of Gandhi Mahal Restaurant on Thursday afternoon. Members of Minnesota Interfaith Power & Light have been working with communities of many different religious backgrounds to discuss the topic of climate change.

Sarah Thamer
Recent University of Minnesota graduate Muhammad Jiwa is using his religious beliefs this summer to spur conversation about sustainable living within the state’s Islamic community.
A member of the Islamic community himself, Jiwa — who studied wildlife science, whole systems healing and sustainability studies — is helping lead a local interfaith organization’s efforts to understand how faith interplays with discussions about climate change.
For the past two years, Minnesota Interfaith Power & Light has hosted a series of conversations with different religious congregations to understand what motivates them to become more environmentally conscious. This summer, the group is bringing discussions to Islamic communities around the state.
The project’s team will host six conversations over the summer, spread between mosques and a local restaurant. The team hopes to normalize conversations about climate change, which Julia Nerbonne, a sustainability studies assistant professor and executive director of the interfaith group, said could be a taboo topic.
In an attempt to better engage people and make the talks more relaxed, the conversations will be held over food, Nerbonne said.
She said she hopes to use the information collected to conduct research and determine what motivates people of different faiths to be eco-friendly.
“If it’s the basic tenant of Islam, Christianity and Judaism to make sure that we give back, then we need to ask ourselves how we can connect the dots and give back for a better climate,” Nerbonne said.
//
Jiwa studied under Nerbonne in an environmental ethics course, and he will coordinate conversations taking place in mosques.
“In the Quran, it says that this earth is a gift to us from God and [that] it is our responsibility to look after the earth,” he said.
Jiwa said it is important to have these discussions because of the impact humans have on climate change, adding that looking at climate change through a religious lens can help encourage dialogue.
“We want to make these conversations socially normative and find out what gets people’s hearts pumping in the Islamic community,” Nerbonne said.
Gandhi Mahal, a Minneapolis Indian restaurant, will host three of the six conversations scheduled for this summer and demonstrate sustainability firsthand. In the small basement of the restaurant sits an aquaponic farm housing about 100 tilapia, whose waste helps fertilize the surrounding beds of tomatoes, spinach and grains.
The restaurant has also provided space on one of its walls for visitors to write their ideas and thoughts relating to climate change.
Ruhel Islam, who is Gandhi Mahal’s owner, sits on the Minnesota Interfaith Power & Light’s board of directors. He said sustainability is an important tenant of Islam.
“You have to be careful with how you treat the earth and its soil because when you die, the soil will treat you the same,” he said.
He said keeping halal — Islamic dietary guidelines — is also important for him, his religion and his restaurant. The way animals are raised and killed impacts people’s bodies and the earth, he said, and he hopes to see more people running a restaurant with the ultimate goal of becoming self-
sufficient.
Jiwa said he hopes to combat anti-Muslim sentiment by showing Islam in a positive light through conservation.
“When we reach across different faiths, it spreads the news and shows that Islam is not hate, that our religion is about looking after the environment and everyone in it,” Jiwa said.
Delete Image
Align Left
Align Center
Align Right
Align Left
Align Center
Delete Heading