After two years at third base, Macken is back to her rookie position in outfield. 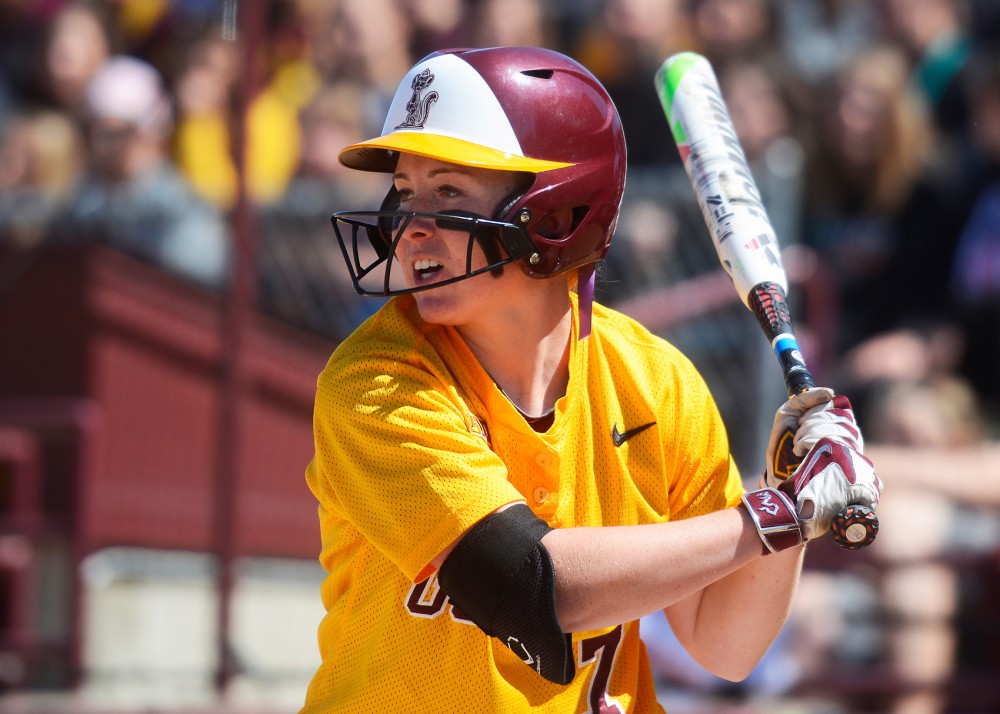 Sam Macken prepares to bat at the Jane Sage Cowles Stadium on April 26, 2015.

A lot has happened for Gophers softball in the past four seasons
— and Sam Macken has been an integral part throughout it all.

She was thrown into the fire almost as soon as she stepped onto
the Minnesota campus and proved she could handle the pressure just as quickly.

She came up big in moments
when it mattered at the plate as a rookie, which included a walk-off single to
beat Michigan in the Big Ten Tournament title game and a three-run home run
against Auburn to send Minnesota to its first-ever Super Regional.

“Sam loves softball,” said head coach Jessica Allister. “Every
opportunity she gets to put on the Gopher softball jersey and play softball is
a great day for her. She loves to compete.”

While she’s demonstrated her hitting dominance, Macken has taken
on a new role as a senior: a true utility player.

Macken began her career with the Gophers as an outfielder and had
30 starts her first season, but for the past two years she’s played third base.

Minnesota lost all three of its starting outfielders to
graduation after last season, so Allister has had to be creative with
positioning, which included sending Macken back to her roots.

Macken, Dani Wagner and Maddie Houlihan have stepped up from the
infield to the outfield this year.

The adjustment has been swift and has gone well for Macken, who has
no errors in left field this season.

“She really just sets the tone of the work ethic that we want,”
said Houlihan.

Macken hasn’t packed quite the punch at the plate this year as
she has in the past, but she still provides a steady leadoff bat for the
Gophers.

She’s tied for second on the team in doubles with 12 — an area in
which Minnesota leads the country.

And although her hitting statistics may be down, Macken said that
this year may be her most enjoyable season yet.

“Hitting is one of those things where no matter how good you get,
you’re never going to be the best,” Macken said. “This year is one of my worse
years, but I’m having the most fun.”

Macken has contributed greatly to the rise of the Minnesota
program as one of two seniors who have been in the program for four years.

Since she has been with the Gophers, Minnesota has won two Big
Ten tournament titles – including its first since 1999 – and is now in
contention for its first regular season conference title since 1991.

“[Macken] epitomizes the idea that you have four years to see
just how good you can be,” Allister said. “She works her tail off — she loves
being a Gopher.”