West Bank and Stadium Village groups plan to use city grants to engage neighbors and capitalize on the light rail opening. 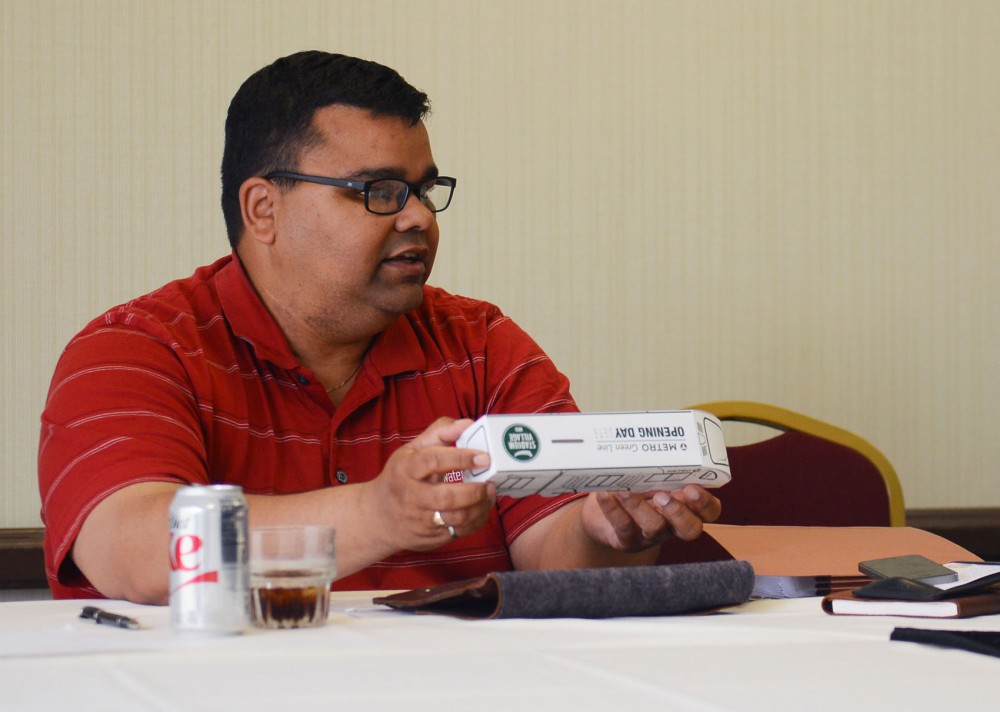 Owner of the Stadium Village Dairy Queen/Orange Julius Chris Ferguson talks about the Green Line at the Stadium Village Commercial Association meeting on May 21. The organization received a $15,000 city grant to help attract light rail riders to local businesses.

Two University of Minnesota-area business districts are now planning for how they’ll use thousands of new city dollars.

Minneapolis’ Great Streets Neighborhood Business District program recently awarded more than $50,000 to business associations for the West Bank and Stadium Village, which their leaders plan to use to extend their reach into surrounding neighborhoods and capitalize on the upcoming Green Line light rail opening, respectively.

“In the past, we’ve used grants like this for seminars, marketing and creating our website,” said the association’s executive director, Jamie Schumacher. “This time, we’re hoping … [to] be doing outreach to businesses.”

Though the association hasn’t yet finalized who will get the liaison position, Schumacher said it will appoint someone soon.

The Cedar Cultural Center, which works with many East African immigrants on the West Bank, hired Fadumo Ibrahim as a Somali community liaison last year.

Since taking on that role, Ibrahim said she’s seen increased engagement between the Cedar and the Somali community.

“You have to find opportunities to put the word out to the community,” she said.

In February, when the Cedar — in conjunction with Augsburg College — received a $200,000 grant to bring Somali musicians to the area, Ibrahim spread the word.

“Our liaison advertises, engages and learns what’s interesting to Somali residents,” said Adrienne Dorn, director of development for the Cedar.

That’s also what the West Bank Business Association intends to have its new liaison do, Schumacher said.

“It’s always good to bring awareness to immigrant businesses who might not be aware of resources,” said Russom Solomon, owner of the Red Sea Bar and Restaurant.

The Stadium Village Commercial Association received $15,000 from the Great Streets program, which it plans to use to attract riders from the Green Line when it opens June 14.

The Metropolitan Council estimates the Green Line, which cuts through Stadium Village, will have 40,000 weekday riders on average by 2030.

But reaping the benefits of light rail traffic will depend on marketing that pulls them off the train and into businesses, said Chris Ferguson, a member of the business association.

“We want to encourage people to walk through Stadium Village and stop in and get a beer or a cone,” Ferguson said.