Jacob Volkmann is a chiropractor by day, UFC fighter by night. 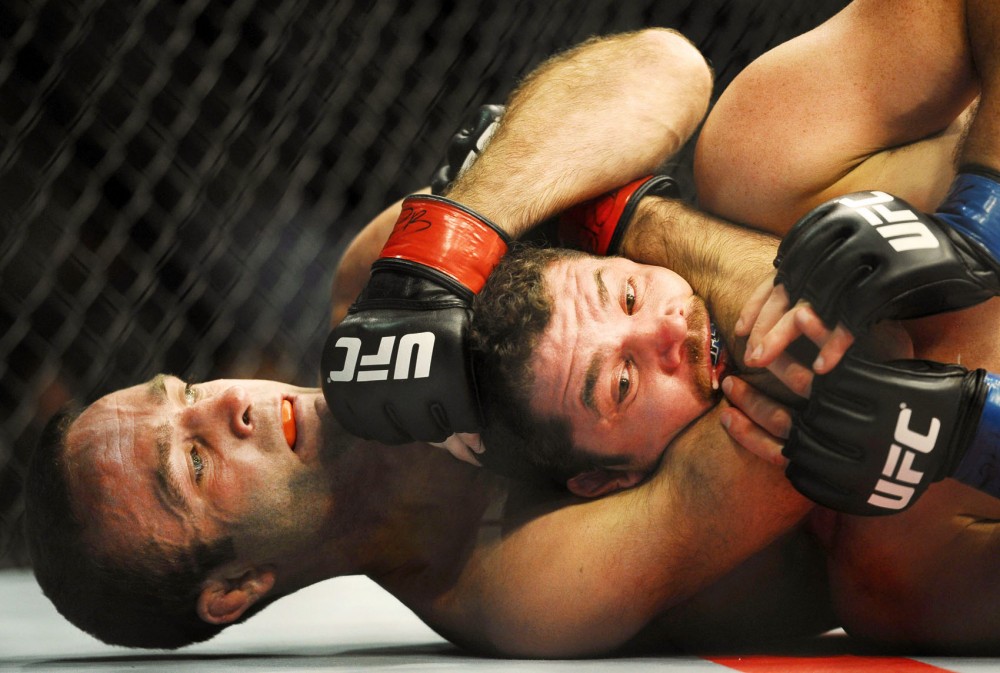 Former Minnesota wrestler Jacob Volkmann chokes his opponent, Shane Roller, during a UFC event Friday night at the Target Center. Volkmann won the bout in the first round after Roller failed to break his hold and tapped out.

Former Gophers wrestler Jacob Volkmann bounced from foot to foot surrounded by a chain-link cage in the Target Center on Friday night.

A chiropractor by day, Volkmann was readying himself for an ultimate fight with former Oklahoma State wrestler Shane Roller.

“Get him to the ground and choke him,” a voice from the crowd yelled.

Two and a half minutes into the first five-minute round, that’s exactly what Volkmann did.

It was Volkmann’s first submission in the Ultimate Fighting Championship, or UFC.

“The Volkmann you’ve seen out there, that’s the real Volkmann. That’s the Volkmann we see in the gym,” said Zach Juusola, Volkmann’s training partner. “I was happy, happy to see him actually show the kind of fighter he is.”

The 32-year-old began his mixed martial arts career in about 2007. He’s been climbing the ranks ever since and even got into hot water for picking a fight with the president along the way.

Volkmann first attempted to switch wrestling styles from folk to the international Greco-Roman so he could possibly compete at the Olympics. But he never quite mastered the new style and set his sights elsewhere.

Former UFC lightweight champion Sean Sherk visited the University of Minnesota to give a demonstration of some submission moves. Sherk ultimately invited Volkmann to help him train for an upcoming fight and gave him his start.

“It’s a lot more exciting than wrestling because in wrestling you can stall,” Volkmann said. “I always had opponents that stalled. … In [the UFC], you’re going to get hit if you stall.”

Before a prospective fighter can step into the cage, he needs to be officially accepted into the UFC. After showing success in lower divisions, Volkmann applied and was accepted.

His wrestling experience helped ease his transition, as did his three years of boxing from high school. But Volkmann still had to learn martial arts like Brazilian Jiu-Jitsu and Muay Thai.

But J Robinson, his former Gophers wrestling coach, said Volkmann had the perfect disposition to go into a sport that’s “pretty much like gladiators.”

“He’s fricking tough. He’s got grit,” Robinson said. “You get a guy down and he’s bleeding … and you’re just still whaling on him. … Jacob can do that and come back.”

Former Gophers teammate and current Gophers assistant wrestling coach Luke Becker said Volkmann has what it takes to succeed in such a vicious sport.

“He was going to do whatever it took to win. He may break [something] in the process, but he’s going to fight through it and battle through it,” Becker said. “Mixed martial arts is perfect for him.”

The intensity doesn’t suit everyone, though, including Volkmann’s wife.

“The wife, she supports it as long as it pays the bills,” Volkmann said. “She doesn’t really like it. … It’s too much for her. She hyperventilated the last time she went to one.”

He didn’t enjoy it until he started winning. The Henning, Minn., native captured the Minnesota state championship three times in high school.

But the military ultimately gave Volkmann an uncharacterized discharge because his training kept overlapping with school.

“It’s just something I always wanted to do. Little kids love the military stuff,” Volkmann said. “Growing up in a small town, you respect the military, too.”

Although his goal of being a man in uniform wasn’t realized, Volkmann did become a Gophers wrestler — a goal he dreamed of since he became more serious about wrestling,

“I kind of fell in love with Minnesota, and that’s where I wanted to go,” Volkmann said. “I never even really paid attention to any other school.”

“He’s a small town kid from a farm, hard worker. That’s the kind of kid that does very well here,” Robinson said.

Volkmann said he spent most of his first year at school studying in his dorm for his two majors, geophysics and geology. He relied on his team to draw him out of his shell.

Robinson said Volkmann has a work ethic beyond what most people can fathom and was a dream to coach.

“Volkmann’s Volkmann,” he said. “We would give guys a day off every now and then and he would say, ‘What do we need a day off for?’ It’s just the way he is.”

Volkmann’s work ethic helped him to numerous achievements with the Gophers. He won the Big Ten championships, was a three-time All-American and was a member of Minnesota’s first two NCAA title teams in 2001 and 2002.

Volkmann said Robinson became like a father figure to him.

Their relationship extended off the mat, too. Robinson gave Volkmann part-time jobs in the offseason and even drove Volkmann and his wife Christine — a former cross country and track and field athlete at Minnesota — to their wedding reception in his 1955 Chevy.

“If you needed something, you could call Jacob Volkmann up at 2 o’clock in the morning and say, ‘Jake I need you here.’ And he would come,” Robinson said.

In January 2011, Volkmann found himself in some political hot water.

After a UFC 125 match, Volkmann was asked who he would like to fight next. At first he named another UFC competitor, but then he changed his answer to President Barack Obama.

When asked to explain his choice, Volkmann responded, “Someone’s got to knock some sense into that idiot.”

At first the comments only sparked Internet buzz. But eventually the controversy led to a sketch on “The Tonight Show with Jay Leno.”

While Volkmann said he was only joking, the Secret Service thought otherwise.

Three days after his fight, Volkmann received an email saying the Secret Service was going to pay him a visit. Two days later, the agents came to Volkmann’s house, leaving his wife in tears.

She directed them to White Bear Lake Area High School, where Volkmann was coaching youth wrestling. The agents pulled Volkmann out of practice to question him and make sure he wasn’t planning to travel to Washington, D.C. and harm the president.

“[I said], ‘Aw jeez, I can’t even afford the plane ticket,’” Volkmann said. “There’s a lot of sensitive people out there, that’s for sure.”

Volkmann used the media’s attention surrounding the comments to promote himself.

The process of matching up UFC fighters is a little political, Volkmann said. The organization wants exciting fighters for the main cards showed on TV.

“[You] try and find something about yourself that fans like that’s a little different than other fighters,” Volkmann said.

So he spun his one-off remarks into a presidential campaign.

He made T-shirts and yard signs that read “Volkmann for president” and encouraged his fans to write in his name on the ballot. He chose the same orange and black colors as White Bear Lake since the school put him on administrative leave after the incident.

Robinson said he will vote for Volkmann in November.

“I think it’s very innovative to use it in that positive light and have some fun with it,” Robinson said.

But Juusola, Volkmann’s training partner, said Volkmann is interesting enough on his own.

“He’s a funny guy. I think he should just be funny and talk normal about his life,” Juusola said. “I think the whole president thing is a little overdrawn.”

Fighting until the end

When Volkmann was a college wrestler, the UFC was still gaining popularity. He said he was probably a part of the first generation of Division I college wrestlers to make the move.

Now, the sport has many more fans, and Becker said more collegiate wrestlers are looking to join after finishing school.

“The intensity, the ‘You-versus-me’ mentality [of wrestling] — I think it just goes hand and hand with mixed martial arts,” Becker said.

Volkmann said wrestlers even younger than college-age, like the kids he coaches at White Bear Lake and a local youth program, are interested in ultimate fighting.

“They don’t understand, though,” Volkmann said. “Very few people go into the UFC. Some of them think that they’re going to get in the UFC easily just from wrestling.”

Volkmann said young fighters can’t just jump into the sport because if they lose a lot right away, the UFC won’t even look at their application. Instead, he suggests focusing on wrestling first.

When Volkmann began ultimate fighting, he said he had a five-year plan to retire from the sport — hopefully after becoming UFC champion.

But now his philosophy has changed.

“My main goal is if I’m still here, to keep fighting,” Volkmann said. “Once they cut me, I’m done. … Hopefully I can retire before they cut me.”

Volkmann has many other priorities he can take on after his fighting career is over. He has three young children, and he opened his own chiropractic clinic in 2008 after earning his Doctor of Chiropractic degree. But he is on appointment-only basis so he can focus on his fighting.

“My main goal is to continue fighting until I can’t fight any more,” he said.