MSA elections: Here’s what you need to know

Get up to date on the candidates and controversy leading up to the election. 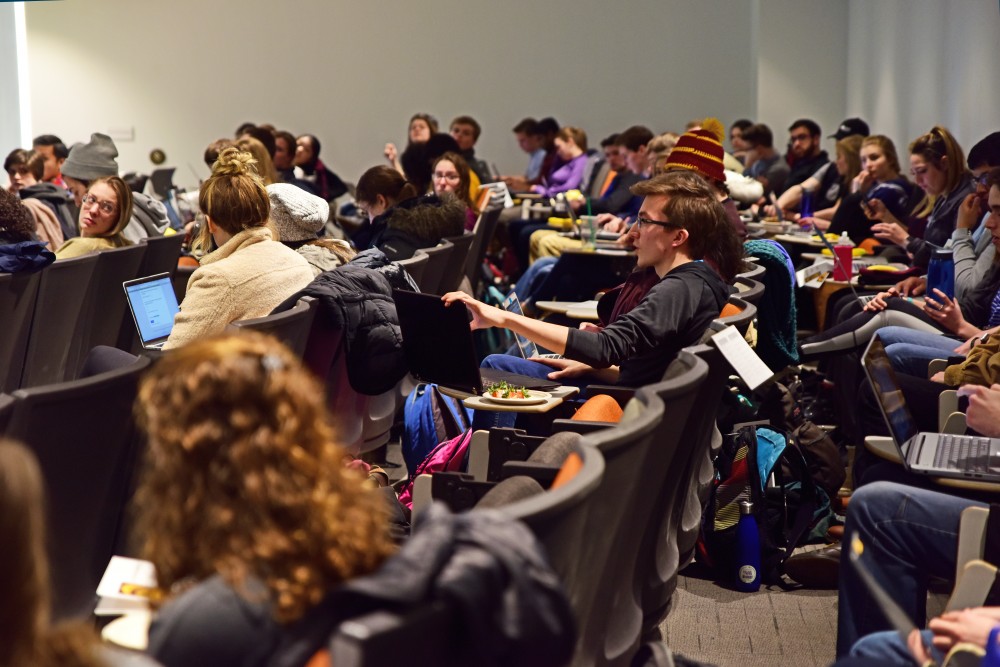 Audience members during a MSA forum on Tuesday, Feb. 6.

The All Campus Elections kicked off today, with a last-minute dropout rocking the ballot.

Because Nguyen dropped out, presidential candidate Osirus Washington is ineligible for the election, per MSA constitution rules.

Washington posted, “Do you get bad karma for having an abortion?” on his Facebook account on Jan 28. Many MSA members and others responded with concern and asked him to clarify the meaning of the post

In response to this comment, Washington said he had “no ill intent” with the post and claimed to be looking for different viewpoints on abortion.

Nguyen’s statement, which addressed Washington’s post and subsequent comments, declared her withdrawal from the race as well as her and others’ “dissociation” from Washington’s comments.

“We want to make the stance known that we condemn ignorance over such a sensitive issue. As women ourselves, we want every woman to feel safe on campus in the conversation surrounding bodily choices. We, individually and collectively, advocate for female empowerment and family planning services like Planned Parenthood. We support healthy dialogue around this topic and do not stand with the comment made by Osirus,” the statement read.

The remaining 2019-20 MSA president and vice president candidates have a diverse range of goals and visions for the future of the University of Minnesota. Current MSA Vice President Mina Kian is running for the presidency alongside current MSA Ranking Representative to the Board of Regents Jael Kerandi.

Kerandi said one of the pair’s biggest goals is creating long-lasting change at the University, with an emphasis on improving affordability.

“Bottom line is I want to make this University a better place not only for myself and my peers now, but for the Gophers that are going to come in ten years and in fifteen years,” Kerandi said.

Another priority is increasing the resources available to sexual assault survivors. Kian previously served as co-director of an MSA task force to combat sexual assault.

Kian and Kerandi both expressed their desire to create a more diverse student body at the University and to provide mental health resources for diverse students.

“I’m really passionate about our recruitment and retention of a diverse student body. … Not only getting these students here, but how do we have a campus that allows them to feel welcome and comfortable?” Kerandi said.

Sustainability is another issue the pair is focusing on. Kian said they hope to push for more sustainable models in dining halls.

Kian emphasized her and Kerandi’s experience with governance and advocacy at MSA, as well as their hope to maintain a close relationship between MSA and incoming President-Designate Joan Gabel.

“I know that me and Jael are the best-equipped individuals and the most passionate individuals to take up the responsibility of governing the Minnesota Student Association in the upcoming year,” Kian said. Third-year student Spencer Kleinschmidt is running for president alongside third-year August Schutz. The pair is not currently involved with MSA.

Kleinschmidt emphasized the power of the student body in helping to implement some of these changes.

“If you get the students behind it, there’s not a lot you can’t do at a University,” he said.

He hopes to implement town hall-style opportunities for collecting and listening to student input. Kleinschmidt said he also wants to work on ways to make campus feel safer, such as working with University police to get timely warnings about crimes on campus out faster.

Kleinschmidt said it’s important to believe sexual assault survivors and provide them with the resources they need. He said he wants to make mental health resources more accessible.