LeMay fuels Gophers at the plate 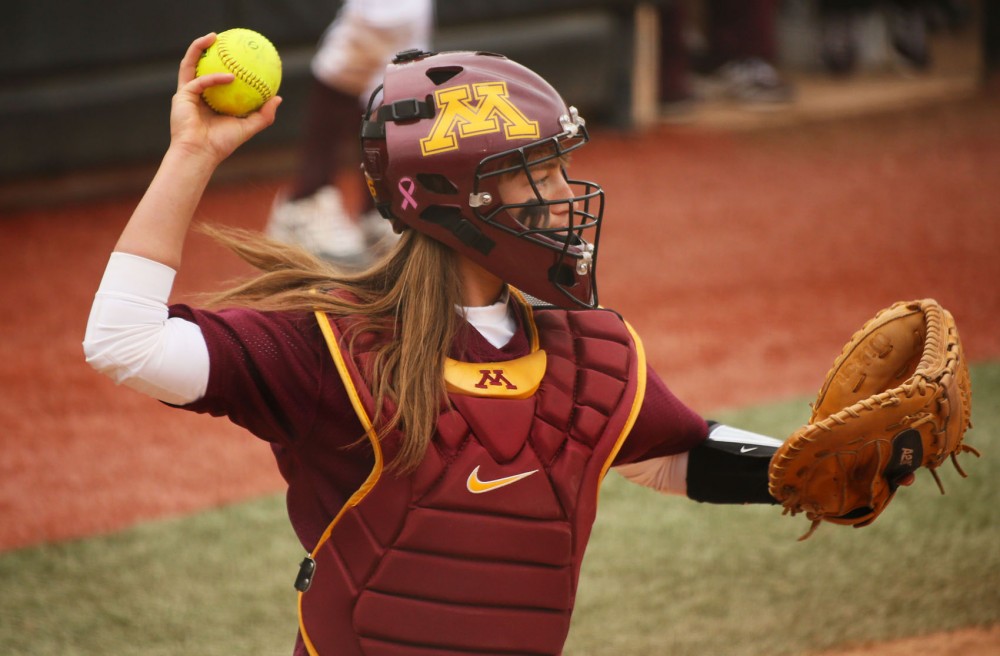 Minnesota catcher Taylor LeMay looks to throw the ball at the game against Oklahoma State University on Friday, March 7, 2014.

No. 21 Minnesota expected big things from star players Sara Moulton and Kaitlyn Richardson before the season, but some of the team’s best production has come from first-year transfer Taylor LeMay.

LeMay — who is seeing playing time for the first time in more than a year since transferring from Concordia-St. Paul — leads the team in home runs.

Gophers head coach Jessica Allister said the key for LeMay has been getting her more comfortable in the batter’s box after going a year without seeing live pitching.

“It’s been a matter of getting back into playing,” the fourth-year coach said. “She sat out an extended period of time … but now you can see her settling in and putting together good at-bats.”

LeMay didn’t play in a game last season, per NCAA transfer rules, after she left Concordia-St. Paul to join the Gophers.

LeMay, a native of Cottage Grove, Minn., said even though she had to miss playing time, the decision was easy because she’s always dreamed of playing for the Gophers.

“When I was growing up, all I had ever wanted was to go to the U of M,” she said, “So when I realized [Concordia] wasn’t the best fit, I decided to take a chance with the transfer and see if it would work out.”

A year later, that chance has paid off in the opportunity to fulfill a lifelong dream while helping the Gophers.

She’s slugging .739 on top of her team-leading six home runs. That slugging percentage is second only to Richardson for highest on the team.

“She’s one of the hardest workers on the team, and it’s really starting to show,” the All-Big Ten pitcher said. “She pushes everybody to hustle because she’s the No. 1 hustler on our team.”

Junior infielder Tyler Walker said LeMay’s transition off the field has been just as smooth.

“She’s a lot of fun to be around, even though she’s shy,” Walker said, adding the team has given LeMay a nickname based on her signature hairstyle.

“We call her ‘bangs’ because of the way her bangs come straight across her forehead,” she said. “We like to give her a hard time, but she gives it right back.”

LeMay has another chance to showcase her ability this weekend when the Gophers travel to South Carolina for a four-game tournament. Minnesota will then play a game against South Carolina on Wednesday.

LeMay said she couldn’t be happier about where she has ended up.

“I love it here,” she said. “It’s been a great season, and [the transfer] is one of the best things to ever happen to me. … I wouldn’t want to be a part of any other program.”