The Minnesota Daily sat down with Athletic Director Mark Coyle for its fifth Q&A of the year. 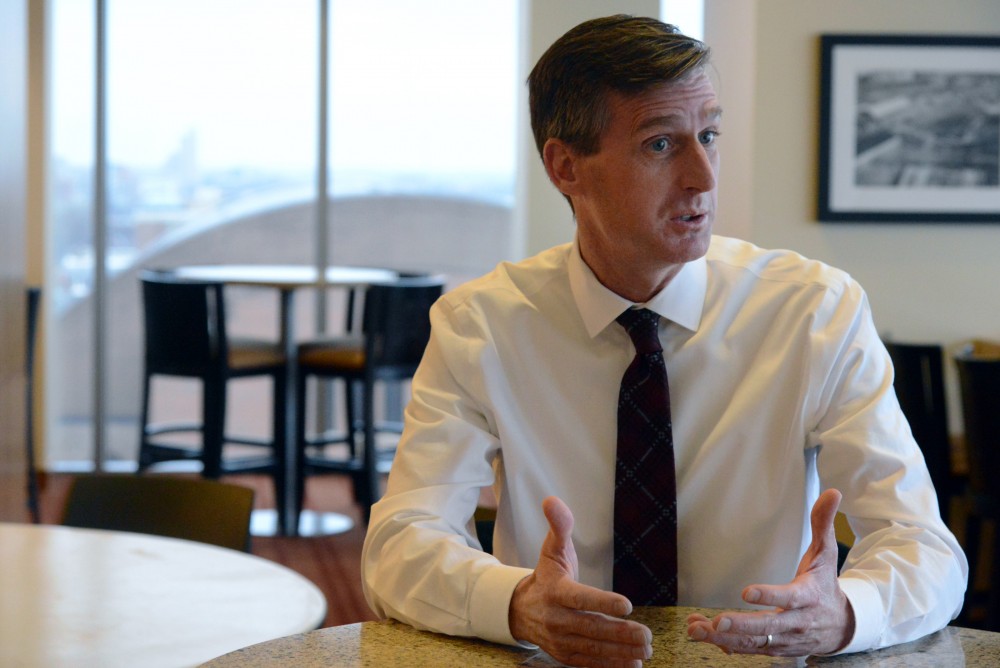 University of Minnesota Athletics Director Mark Coyle sat down with the Minnesota Daily for his fifth Q&A.

What have you been doing since January?

I’ve been staying with the winter sports — both basketball programs, swimming and diving, gymnastics, the hockey programs… I’ve been staying really busy there, and it’s an exciting time in the department because you have your winter sports winding down going into their championship season. Our spring sports have obviously started gearing up.

Softball is off to a very good start. How do you oversee that team?

First off, a credit to those students and head coach Jessica Allister]. Off to an 18-0 start, beating LSU, Notre Dame, Texas — teams like that, all away games. They’re going on the road again this week to play Washington. I really enjoy my time with coach Allister. She talks a lot about how you just roll up your sleeves and you work hard. I think you see her team embrace that mentality, and they’re doing a wonderful thing.

Is Allister an extension candidate?

As you and I have talked before, you evaluate coaches daily. You have to in this business. We are so thankful for Jessica and what she brings to this program … Obviously that’s somebody. I learned a long time ago you’re a lot better when you surround yourself with really good people. She’s a great person and there’s no doubt she has a huge impact not only on our department, but with the students she works with day in and day out.

Brandon Eggum was recently promoted to full time head coach. Can you explain the decision behind that?

Brandon, obviously he and I over the past nine-ten months have gotten to know each other. It’s been great to see how the students on that team responded to Brandon when he was our interim head coach and we named him head coach. You see our recruiting is going well, so him having wrestled here and been here so long, I think he embraces what we’re trying to do here … We have nine wrestlers competing in the NCAA championships next week in St. Louis. I think that’s the most since 2014. The team has responded well to him. The fans have responded well and I’m excited for Brandon…

The narrative on the men’s basketball team has shifted since we first spoke in September. What has it been like to watch the turnaround?

First off, [I’m] excited for those students and I’m excited for [head coach Richard Pitino]. They were 8-23 last year and now they’re 23-8, a complete flip of the wins and losses — the biggest turnaround in Division I basketball … We had, I think, three kids get recognized on first team, All-Big Ten, third team. [Reggie Lynch] got defensive player of the year. I give them a lot of credit. Richard and that team took ownership with what happened last year. They worked hard over the summer and I think it prepared them for this year … They deserve that success because they’ve worked really hard, which is great to see.

After last year’s season, there were questions about Pitino’s job status. Was it hard to be patient?

No. Richard and I, we never knew each other until I got here. A day after my press conference, I had a chance to sit down with him and I told Richard the same thing I tell all of our coaches… I feel like my job as the athletics director is to do everything I can to support our coaches and our students… Richard and I have a very strong relationship. I enjoy spending time with him. I think he enjoys spending time with me. Again, I’m just really excited because he and that team have worked so hard. I’m talking academically, socially and athletically. They’ve worked so hard and it’s great to see that hard work pay off with the success they’ve had, and I know they’re excited to get to Washington D.C. for the Big Ten tournament.

The football spring season is underway. Anything you’ve noticed from them since we talked in January?

There’s a sense of urgency and excitement obviously, with [head coach P.J. Fleck] being a new coach. He gets to have his first practice, so I’m sure he’s excited. I had a chance to talk with him [Tuesday] afternoon. He’s excited to be out there and have a practice and spend time with those students. I think our students are excited. I know coach Fleck, our new coaching staff, is excited to get practice started and to continue to build on the momentum we have in place and keep moving forward.

There was a report Fleck had communicated with a former player. Did you take that seriously? Note: This question was asked before it was reported Minnesota would be self-reporting a NCAA violation.

How did you respond to the report?

Editor’s Note: This Q&A has been edited for clarity and length.