The senior captain will undergo surgery on Wednesday to repair a broken bone in his right foot. 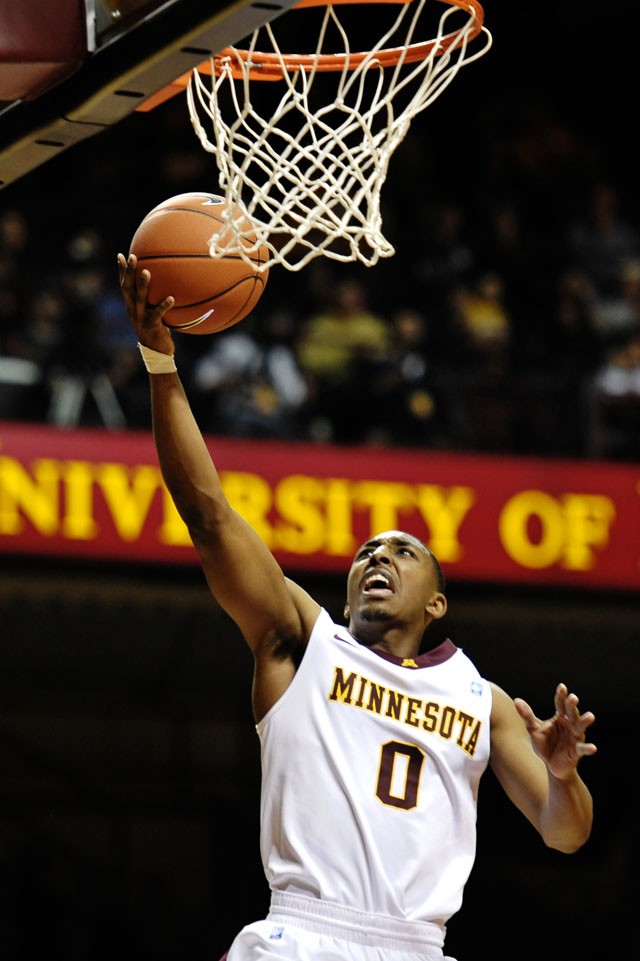 This isn’t how Al Nolen’s envisioned his senior season.
The guard and captain for the 16th-ranked Gophers will undergo surgery on Wednesday to put a pin in his broken right foot, coach Tubby Smith announced Monday during the Big Ten media teleconference. He will be out indefinitely.
Nolen suffered the injury in the first half of MinnesotaâÄôs win Saturday at Michigan and did not return to the game. He sat five games earlier this season with a stress fracture in the same foot.
âÄúWe will definitely miss the leadership of our senior point guard,âÄù Smith said in a press release. âÄúWe knew that Al was playing with a lot of pain since the previous injury occurred, so we are hoping that the procedure will relieve the pain and make it possible for him to return to the lineup by the end of the season. In the meantime, we know that Al will continue to be a leader from the bench.âÄù
Nolen bolstered the Gophers defense with 2.4 steals per game this season. He also averaged 8.4 points, 3.7 assists and 3.6 rebounds in 29.1 minutes per game, second most on the team. NolenâÄôs 205 career steals are No. 2 in team history, and heâÄôs third in career assists with 394.
The news is another hit to the depth of a team hoping to contend for a Big Ten title. Nolen’s backup Devoe Joseph transferred to Oregon earlier this month and freshman center Mo Walker will miss the remainder of the season because of a knee injury. Now the Gophers must turn to freshmen Chip Armelin and Maverick Ahanmisi for help at the guard position. Senior Blake Hoffarber may also run the point as he did in the second half against Michigan.
Another player who could see increased playing time is Austin Hollins. The 6-foot-4 freshman has played mostly as a wing behind Rodney Williams, but he has the skill set to play as a shooting guard. If Hoffarber takes the bulk of the point guard duties, Hollins could give the Gophers a significant length advantage.