Both the men's and women's teams have started the season 0-2. 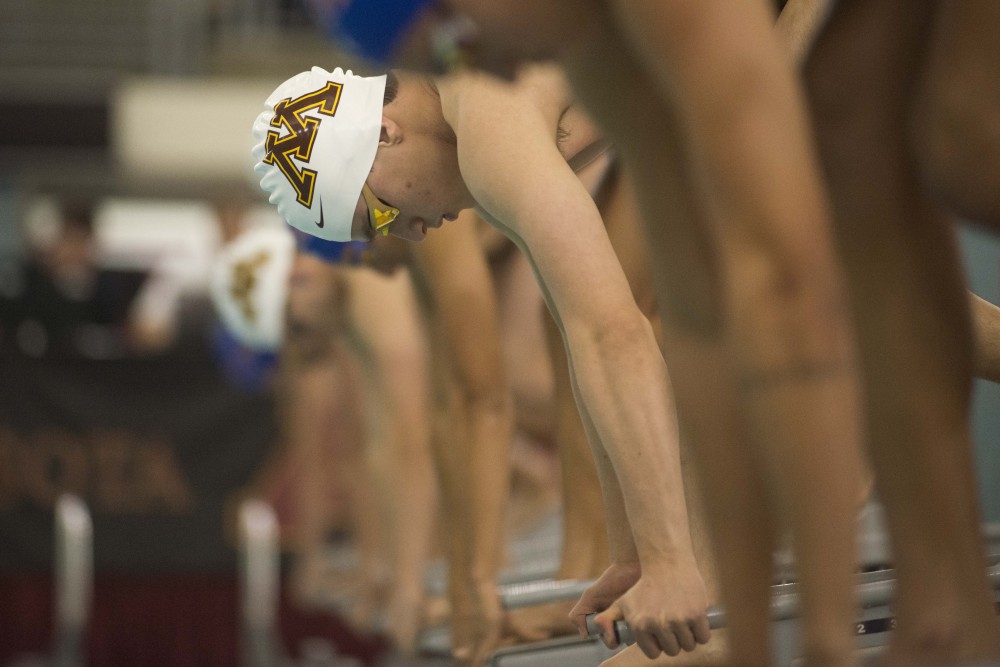 Sophomore Evan Yoder prepares to enter the water to compete against the University of Florida at the Jean K. Freeman Aquatic Center on Friday, Oct. 11.

Minnesota’s swimming and diving teams headed to their first road dual of the season Friday against the Florida State Seminoles. While seeing many improvements from their home opener, the Gophers were unable to convert it into a win. Both the men’s and women’s teams fell short of the Seminoles with final scores of 103-197 and 111.5-186.5, respectively.

Sophomore Abbey Kilgallon was among Gophers that finished at the top of the podium for the women, winning the 1000 yard freestyle with a time of 10:04.51 as well as the 500 yard freestyle. Tevyn Waddell finished first in the 100 yard backstroke with a time of 55.10 while teammate Emily Cook finished in second while also placing first in the 200 yard backstroke. The event proved to be fruitful for the Gophers, posting four of the top five times in the event, with Jordan McGinty, Patricia Van Law and Lillianna Brooks following Cooks’ lead.

Senior Lindsey Kozelsky rounded out the Gopher women who grabbed a top finish in the 200 yard breaststroke.

Jae Sarkis and Jaclynn Fowler were notable divers finishing third and fourth in the one-meter, respectively. Both divers finished with NCAA Diving Zone qualifying scores in the three-meter as well.

The men produced in the long distance events as junior Cameron Kelley won the 1000 yard freestyle for the men with a finishing time of 9:18.12.

Junior Tim Sates finished second in the 200 yard freestyle with a time of 1:38.95, making it one of his two top-three finishes of the night. Sates also finished third in the 100 yard freestyle.

Junior Maxim Royzen had the top score in both diving events for the men. He placed third in the one-meter and three-meter events.

Despite the top finishers throughout the team, Florida State won 23 events, compared to Minnesota’s nine.

Minnesota now shifts focus to an away dual with the Iowa Hawkeyes on Saturday, Oct. 26 at 11 a.m. in Iowa City.