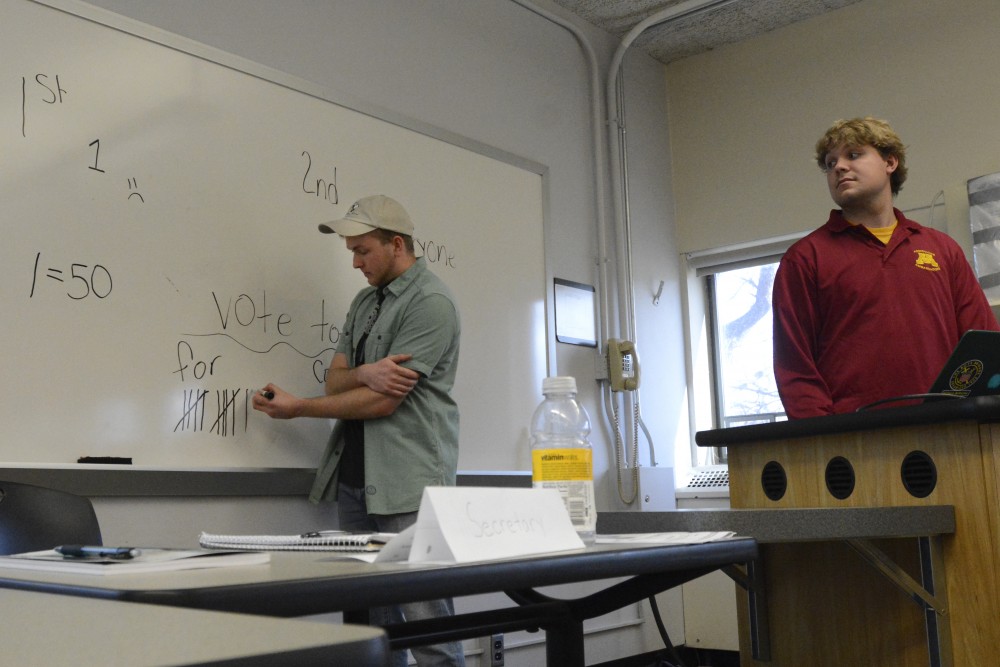 French junior Quin Klett and Genetics, Cell Biology, and Development junior Nick Malcore tally votes during the role-playing game "Reacting to the Past" in Gateways to French and Francophone Studies class in Peik Hall on Tuesday, March 28, 2017. Every student plays a historical role affiliated with the National Assembly during the French Revolution. "It's a fun way to learn and internalize information in a different manner," Klett said. "Course book readings go over your head but you have to know what you're talking about here."

There were half as many graduates from the University of Minnesota’s Spanish department in 2016 as there were in 2012.

Last year, the University of Minnesota had just one Russian language graduate.

Enrollment is declining in language programs across the board at the University. During the 2011-2012 academic year, nearly 200 undergraduates received a language degree from the University, compared to 110 last year. Some faculty members are changing curriculum to combat low interest, which they attribute to the 2008 recession and current events.

“An event like the recession doesn’t have immediate effects,” said Mary Franklin-Brown, director of undergraduate studies for the French and Italian department. “You really only start to see the effects of the recession once all of those students who were in college when the recession happened have graduated … There’s about a four year lag.”

General economic anxieties combined with the rising cost of higher education have created mounting pressures for students to choose majors outside the humanities because humanities-related jobs generally have low starting salaries, Franklin-Brown said.

“I think French is one of those standout, easily-targeted majors because people say, ‘What can you do with a major in French?’” she said, adding that many people don’t realize language degrees also teach students about culture, communication and critical thinking.

Some professors say a longer history of lagging financial support is to blame for drops in language majors, too. Slavic Languages and Literatures Director of Undergraduate Studies Gary Jahn said the department, which houses the Russian major, has steadily lost faculty since he started teaching at the University in 1977.

However, fluctuations in Russian enrollment are largely motivated by current events, Jahn said.

This isn’t unique to Russian, said Melin, who is also involved with the national Modern Language Association. Current events, even sports, can generate more interest in a country and its language, she said.

For example, the popularity in German fluctuated in the 20th century with the fall of the Berlin Wall and the nation’s reunification, Melin said. The language also used to be studied more frequently because it was listed as a critical language by the federal government, and interest has declined slightly since the government dropped that designation, she said.

Arabic, currently listed as a critical language, is enjoying strong enrollment at the University partly because students know those skills are in demand by the U.S. government, said Katrien Vanpee, director of Arabic language instruction in the Department of Asian Languages and Literatures.

Melin said this is the case across the country.

“I think this is because there’s a high level of awareness among students that having a second language gives you a set of skills that are very useful in your career,” Melin said.

To combat misconceptions about language majors and to attract more students, last semester the French and Italian Studies Department launched a course taught in both English and French, that seeks to show students what they can do with a French major, Franklin-Brown said.

Faculty teaching the course, called “Gateways to French and Francophone Studies”, hope to use nonconventional teaching methods to draw students in, she said. For example, this month the students in the class are participating in a role-playing game to learn about the French Revolution, she said.