The loss was marked by offensive struggles and missed opportunities. 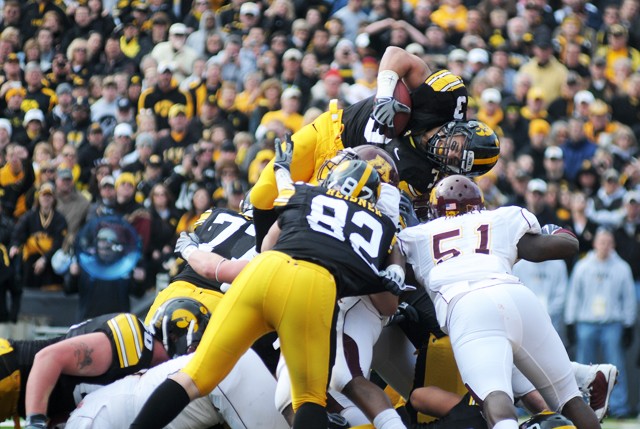 IOWA CITY, Iowa âÄî Minnesota had the ball on IowaâÄôs 2-yard line for the fourth-straight play. Now late in the fourth quarter, the Gophers had driven from the HawkeyesâÄô 29 after sophomore defensive tackle Jewhan Edwards fell on a fumbled snap, but in the previous three downs they hadnâÄôt moved any closer to the end zone. Junior quarterback Adam Weber dropped back, felt pressure and was sacked for a 5-yard loss; Iowa ball with just 6:20 to play. Encapsulated in that play was an entire Saturday during which the defense made plays but the offense failed to respond. The Gophers outgained the No. 13 Hawkeyes but were shutout for the second time in as many meetings. The pig is starting to get comfortable at Kinnick Stadium. This wasnâÄôt demoralizing on the level of 55-0. In many ways, the defense outplayed an Iowa unit that entered the game ranked 11th in the Football Bowl Subdivision in total defense . But in a game in which punts outnumbered points, the Hawkeyes won the only defensive category that matters, keeping the Gophers (6-6 overall, 3-5 Big Ten) off the scoreboard for a 12-0 win and Floyd of Rosedale in Iowa City for the eighth time in nine years. âÄúItâÄôs tough,âÄù GophersâÄô head coach Tim Brewster said. âÄúItâÄôs tough when your defense is playing as hard as they played. But we knew what we were getting into today. Shoot, IowaâÄôs a great defensive football team.âÄù But MinnesotaâÄôs defense found little solace in holding Iowa (10-2, 6-2) to 171 yards and 12 points . âÄúWe wanted the pig,âÄù senior linebacker Lee Campbell said. âÄúItâÄôs a shame.âÄù The Gophers are up to 14-straight losses to ranked opponents, four of them this year . TheyâÄôve yet to win a trophy game in three years under Brewster. After seven regular-season wins a year ago, Minnesota won only six this year but will go to a bowl game for the second-straight season. If MinnesotaâÄôs offense has been inconsistent in 2009, it has been decidedly futile against the Big TenâÄôs top-three defenses. In three road games against Penn State, Ohio State and Iowa, the Gophers have a total of seven points âÄî a late touchdown on a Buckeyes defense made up of primarily reserves . Weber described his frustration after the game as being âÄúpretty high.âÄù âÄúThis game, all the way through it, it felt like we were one play away âÄ¦ We had some chances; we got down in there, but we just werenâÄôt able to finish.âÄù There was the stall on IowaâÄôs 2. Early in the second quarter, Weber and junior center D.J. Burris botched a snap on the HawkeyesâÄô 13 and Iowa recovered. The Gophers again drove deep into Hawkeyes territory late in the fourth quarter but were derailed by four-straight incompletions. Beyond that, MinnesotaâÄôs offense lacked direction as it failed to score a touchdown for the second-straight week. Meanwhile, the defenseâÄôs finest performance of 2009 was being wasted in a game that, at times, looked like a punting contest. After the Hawkeyes opened with a 68-yard drive and a field goal, the Gophers allowed just 103 more yards. They bluffed and shifted on redshirt freshman quarterback James Vandenberg, then brought more pass rushers than they had all season. Vandenberg, who was never very comfortable in the pocket, threw for 117 yards and an interception and was sacked four times . Two defensive backs, juniors Ryan Collado and Kim Royston, collected their first career sacks. But for all of the defenseâÄôs success, that opening field goal by Iowa was enough to be the difference. The Gophers return to Minneapolis pigless yet again, now resigned wait for a bowl game. That bowl game may have improved despite the loss, as Iowa has a fair shot at an at-large BCS berth. However, playing a potentially BCS-bound team close is no consolation, nor is improving on 2008âÄôs flop. âÄú12-0?âÄù senior defensive tackle Garrett Brown asked rhetorically. âÄúThatâÄôs even worse than getting beat 55-0 in our eyes because we did everything that we were supposed to do, but as a full team, we couldnâÄôt get it done.âÄù