Smith amassed 96 yards on offense, but the Gophers had just 133 in total. 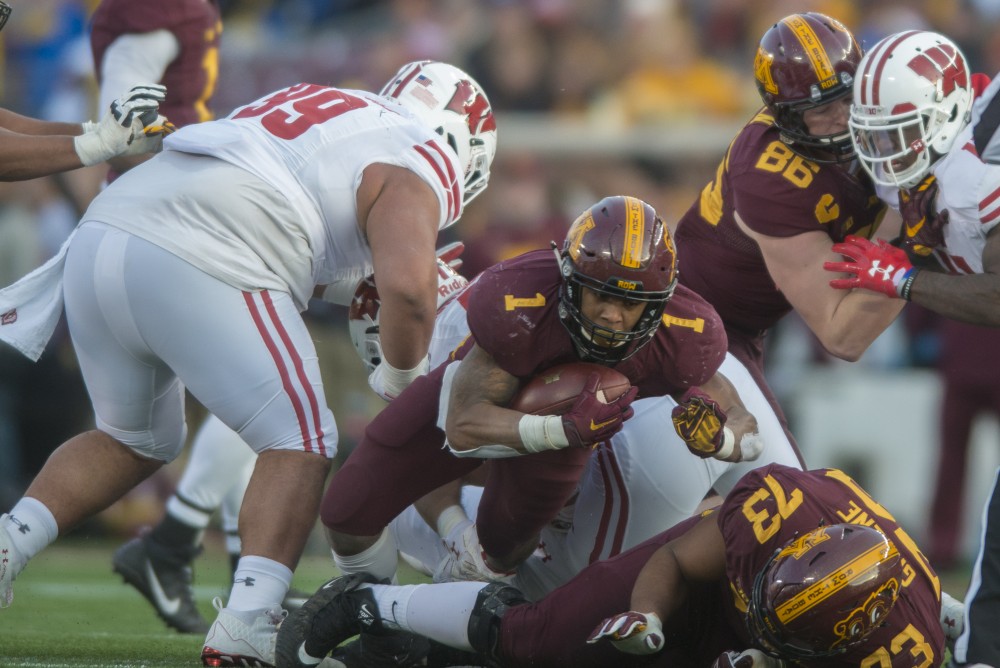 Minnesota running back Rodney Smith dives from a tackle during the game against Wisconsin on Saturday, Nov. 25 at TCF Bank Stadium. The Badgers beat the Gophers 31-0.

There was a lone bright spot in the final game of the regular season, however: running back Rodney Smith.

Smith had 96 total yards of offense out of 133 yards the Gophers scratched together in the Badgers blowout win. Minnesota lost to No. 5 Wisconsin 31-0 in Minnesota’s last game of the season.

Smith was one of the few offensive players to move the ball for Minnesota (5-7, 2-7 Big Ten). He was the leading rusher with 82 yards on 16 carries. He was also the leading receiver in terms of receptions, with two catches out of three targets for 14 receiving yards. Smith also had kickoff return of more than 90 yards following the Badgers first touchdown, but it was called back by a holding penalty.

The Wisconsin (12-0, 9-0 Big Ten) defense ranked No.1 in the Big Ten, allowing just 13 points on average per game before this game. Smith found running lanes on the ground, but the Badgers held the Gophers to 40 yards through the air.

“It was tough. We had some success, but it was definitely tough,” Smith said. “Their backers did a good job of playing downhill and filling the lanes.”

The Gophers offense didn’t produce in the loss to Wisconsin. Each of the first five drives were three plays and then a punt for the Gophers offense, keeping an exhausted Gophers defense on the field for almost 21 of the 30 minutes in the first half.

Minnesota’s defense knocked the ball out of Wisconsin running back Jonathan Taylor’s hands and Minnesota linebacker Kamal Martin jumped on it for a turnover at Minnesota’s 49-yard line with 6:03 left in the first half. The Gophers punted to Wisconsin once again after three plays of stagnant offense with four minutes to play in the second quarter. Wisconsin drove the ball 79 yards for a 17-0 lead before halftime.

Because Minnesota failed to beat the Badgers and enough six-win teams exist to play in bowl games, Smith ends the season as the Gophers leading rusher with 977 yards, just shy of a 1,000 yards rushing season. He ends with 1,447 all purpose yards, short of last year’s 1,609 all-purpose totals, but he had an extra game to earn yards last year.

Smith will be a senior next year, along with running back Shannon Brooks, who sat out half of this season with injuries. Senior running back Kobe McCrary, who was a backup but became a starter, will graduate.

“We are exactly where we are and I’m hired to fix it,” Fleck said. “We’ll fix it. Recruiting, development, strength and conditioning — that’s what we’ll do within our program.”