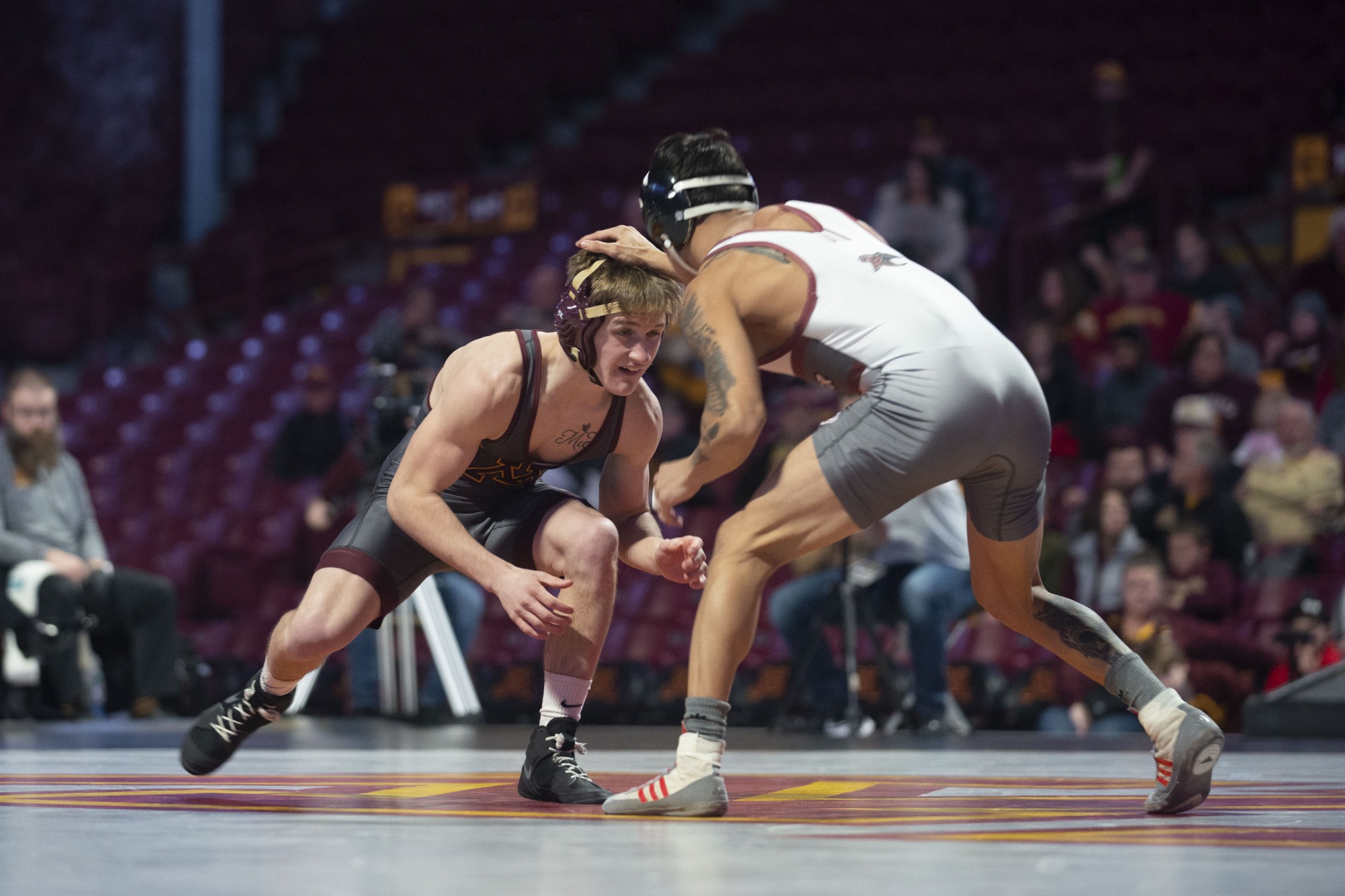 Redshirt Patrick Mckee prepares for a match with an opposing Rider wrestler at Williams Arena on Friday, Nov. 15. The Gophers went on to fall to Rider with a final score of 21-17.

In their first dual since their stunning loss to Rider, the Gophers wrestling team was unable to bounce back with a victory, falling 21-12 to then-No. 11 Oklahoma State.

Similar to their loss against Rider, the Gophers were fighting from behind against Oklahoma State. At 125 pounds, redshirt freshman Patrick McKee fell in a 3-2 decision to his fourth ranked opponent, redshirt senior Nick Piccininni. Piccininni picked up the match-winning point for riding time. At 133 pounds, redshirt sophomore Brent Jones took an 8-1 lead in the first and finished the period leading 8-5 before faltering and getting pinned in the second. The Gophers fell into a 9-0 deficit.

Also similar to their dual against Rider, 141-pound Mitch McKee got the Gophers back on track. Mitch McKee was tied with redshirt junior Dusty Hone after two, but landed a takedown in the third and earned four near fall points to take the 10-5 decision, bringing the Gophers within six points.

The 174-pound Devin Skatzka finally ended the Gophers’ drought. His opponent, redshirt senior Andrew Shomers, landed a takedown in the first but Skatzka battled back, getting a reversal and taking a 3-2 lead, racking up 3:59 in riding time by the end of the second period. He added a point from an escape in the third to take the 5-2 decision.

“You try not to let the takedown bother you, you can’t change it,” Skatzka said. “That was the first 10 seconds of the match, I still had six minutes and 50 seconds to wrestle. That’s plenty of time to make up for two points. That’s kind of the way I look at it.”

At 184 pounds, Owen Webster kept the momentum going, getting the upset over No. 18 Anthony Montalvo. Webster landed a takedown in the second and added two escapes for the 4-3 decision. The Gophers still trailed 18-9, but had a chance with two wrestlers to go.

Ultimately, a stunning comeback wasn’t in the stars for Minnesota. At 197 pounds, Garrett Joles was unable to beat his top-10 opponent. He lost a 7-2 decision to redshirt junior Dakota Geer as Oklahoma State clinched the dual victory, taking the 21-9 lead. Closing out the dual at heavyweight, redshirt senior Bobby Steveson won an 11-5 decision for the Gophers, landing takedowns in each period.

“I thought we were in every match for the most part, which was a good thing. I liked our energy and the way we started matches,” said head coach Brandon Eggum. “We didn’t wrestle well on bottom, I think [that] made a difference. We’re going to improve in some areas.”

The Gophers will look to bounce back in their next dual against South Dakota State on Friday, Dec. 20.

“I know we’ll keep getting better every week, but it comes down to the close ones, those are important,” Eggum said. “At the end we talked about winning the close ones if you want to be a team that’s great. That was the difference maker today.”