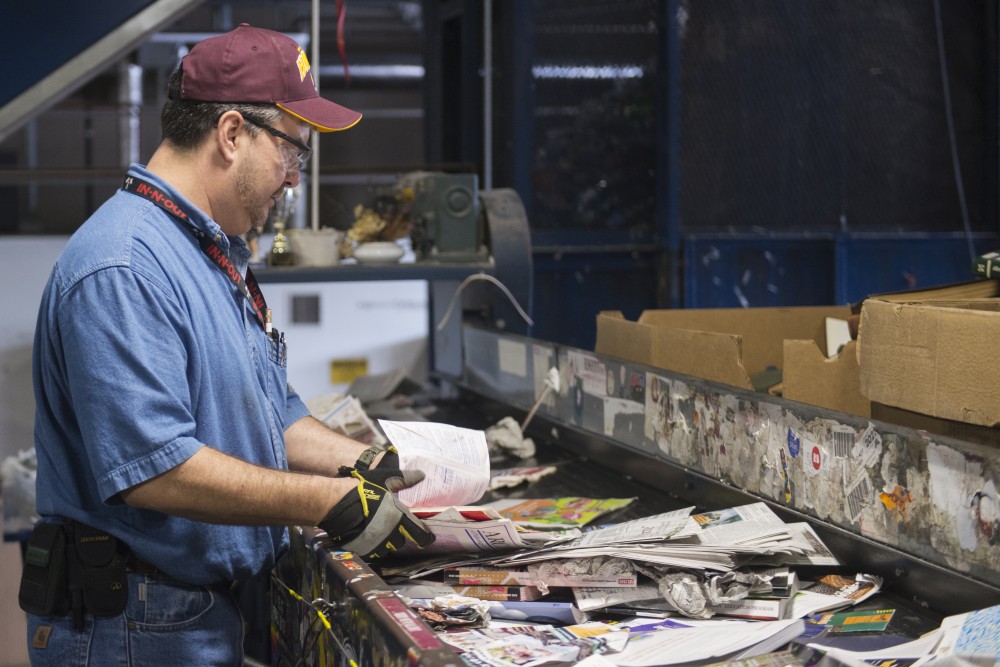 A worker at the Como recycling center sorts out recyclable paper products on a conveyor belt on Friday, July 13. The center will bring about 2,000 organics bins to every building on campus over the course of two years.

The University will implement its plan to scale-up its organics recycling over the next two years in order to reduce pollution, costs and waste generation on campus after several successful pilot programs and ongoing support from University leadership.

The updates will add the option to recycle organics alongside paper and plastics in the four-system collection bins found in campus buildings and establish the use of 100 percent compostable eating utensils in University food service areas.

The ongoing work on organics also shifts the campus mentality around recycling by asking people to sort their waste into the expanded disposal options, which is called a centralized collection system.

“When you put [sorting] in the hands of the waste generator, they become more responsible,” said Todd Tanner, interim recycling coordinator with Facilities Management. “It makes people think about what they’re generating.” The organics programs not only have an environmental benefit, they also have a financial benefit — it costs  $25 per ton to dispose of organics compared to $76 per ton for trash, said Facilities Management senior student recycling coordinator John McKeown in an email.

University leaders began working on the initiative when the Social Concerns Committee passed two resolutions in support of organics recycling earlier this year. The resolutions came to light after work between facilities management and other university committees in support of the centralized collection system and compostable utensils in University spaces.

The resolutions were essential in facilitating the organics roll out, McKeown said.

“There are a lot of different competing interests and motivations in an institution of this size,” Tanner said. “You can’t undertake a monumental task like this without generating building cooperation through the system.”

The Minnesota Student Association has been aiding in the effort by working on pilot programs for implementing organics recycling in University residence halls since 2016.

“It’s kind of… a push and pull between [MSA] having these ideas and kinda just giving them out to the students and like getting feedback in return,” said Jake Marble, MSA’s 2018 organics project lead.

“Scientists agree the climate is changing,” Tanner said. “I think more and more people are becoming more aware of this and altering their behaviors, because everybody starts to realize that they have an impact on it and at some point if we don’t have enough people in the transition— well, I don’t wanna talk about that.”