The story behind the trophy given to the winner of college football’s oldest rivalry. 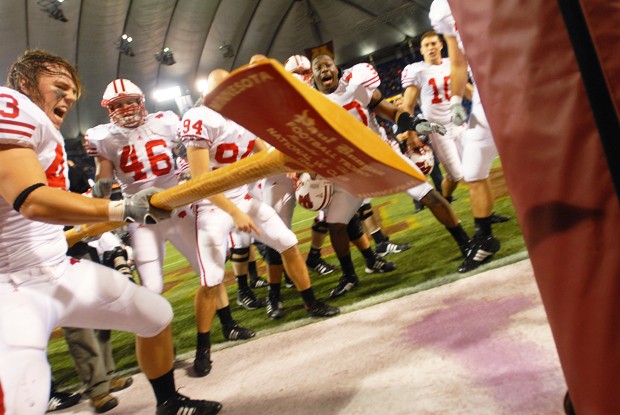 A slab of bacon. That was the first trophy given out to the winner of college footballâÄôs oldest and most played rivalry. Created in 1930, the slab of bacon is actually a black walnut trophy and was made to honor the winner of the annual Minnesota vs. Wisconsin football game. Carved on it is the letter âÄúMâÄù or âÄúW,âÄù depending on which way you hold it. The first ever meeting between the teams was in 1890, with the Gophers winning the contest, 63-0. The slab of bacon was awarded to the winner 40 years late. In the 1940s, the fate of the slab of bacon remained shrouded in mystery, after it disappeared following a game between the Gophers and the Badgers. Furthering the mystery of the slab of bacon, it was found in 1994 in a University of Wisconsin storage room, almost 50 years after it had mysteriously vanished. Despite being declared missing for those 50 years, it still had scores written on it from as recently as 1970. Without a trophy following the suspicious disappearance of the slab, Paul BunyanâÄôs Axe was created by WisconsinâÄôs âÄúWâÄù Club in 1948 as a way for the two schools to keep track of college footballâÄôs longest running rivalry. The current version of Paul BunyanâÄôs Axe is not the original. The original axe handle was running out of room for scores from the contests, so in 2000 the âÄúWâÄù Club created the current version of Paul BunyanâÄôs Axe. In recent years, the Gophers have had no success getting or keeping the Axe on their side of the border; the last Minnesota victory was in 2003. Bringing the Axe back, especially to a current Gophers roster that has never won the Axe, remains a top priority. âÄúMeeting with coach Fisch , we talked about âÄòWhat are some of our goals this year?âÄôâÄù junior quarterback Adam Weber said. âÄúFor me personally, it was to win all of the trophy games. Being the first one, and probably the most important of them all, itâÄôs something truly special.âÄù For senior receiver Eric Decker , this will be the last chance he has at seeing the Axe, and itâÄôs something that has him motivated headed into SaturdayâÄôs contest. âÄúI havenâÄôt seen the Axe since IâÄôve been here,âÄù Decker said. âÄúItâÄôs kind of an extra incentive of playing this game.âÄù Minnesota head coach Tim Brewster considers the fight over the Axe to be among the top of college footballâÄôs rivalries nation-wide. âÄúI’ve been part of the Texas/Oklahoma rivalry, and obviously that’s a big one, but you know what, I think this game has strong merit as being a really good rivalry,âÄù Brewster said. This will be the 119th game between the two teams, and while Minnesota leads the overall series, 59-51, with eight ties, the Badgers lead since the AxeâÄôs inception in 1948, 34-24, with three ties. The first ever fight for the Axe in TCF Bank Stadium will be an experience different from the Gophers other 11 games this season. âÄúThis is truly one of those special games that you can definitely tell; itâÄôs a little bit different feel when you go out there,âÄù Weber said. Trophies elsewhere While the Gophers and Badgers have college footballâÄôs oldest rivalry, the annual battle for the Axe is not the oldest trophy Minnesota fights for within the Big Ten conference. That distinction belongs to the Little Brown Jug, which is given to the winner of the Minnesota vs. Michigan contest and was first fought for in 1909 . Floyd of Rosedale, given to the winner of the Minnesota vs. Iowa game, was first played for in 1935 . The Gophers other trophy, the GovernorâÄôs Victory Bell , was created in 1993 to acknowledge Penn StateâÄôs entrance into the Big Ten Conference. Minnesota is not the only school that has a yearly fight for an axe. The Stanford Axe is given to the winner of the Stanford vs. California football game. While California currently has possession of the Axe following a victory in 2008, Stanford leads the overall battle for the Axe 38-32. As for where Paul BunyanâÄôs Axe rates among nation-wide trophies? The Texas vs. Oklahoma game, known as the Red River Shootout, awards three trophies to the winner, although the âÄúGolden HatâÄù is the only trophy actually given out after the game; the other two trophies are exchanged by the student body presidents and the governors of the two states. In one case, a trophy is given to the winner of not just one game, but two. The Commander-In-Chief trophy is fought for between the Army, Navy and Air Force Academies. Each team plays the other, and the team with the best record within the three schools gets the trophy. In the event of a tie, the two teams split the trophy, and the previous yearâÄôs winner maintains possession of the trophy for another year.