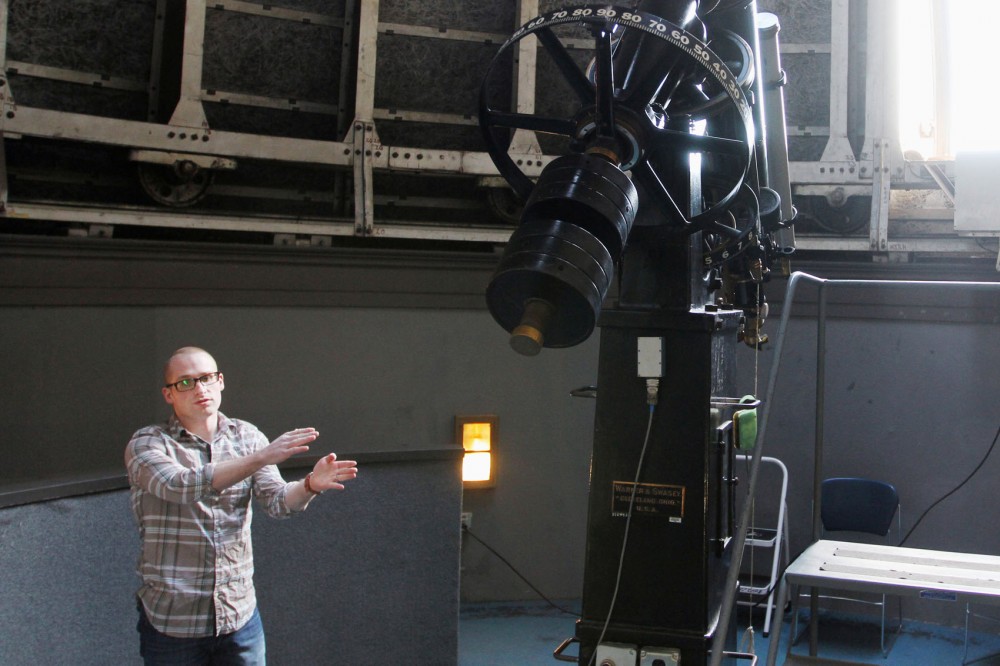 Skyler Grammer, an atstrophysics graduate student, describes the process of modernizing the more than 100-year-old Tate observatory telescope. The telescope is estimated to weigh 500 pounds and is mostly used to view planets and galaxies.

Despite warmer temperatures, University of Minnesota sky gazers still flock to a rusted green dome to feast their eyes upon the wonders of space.

For about 30 years, the University’s Minnesota Institute for Astrophysics has held public viewing on the roof of the Tate Laboratory of Physics every fall and spring semester. But the recent unseasonably warm weather hasn’t been as beneficial for gazing at the sky.

“Technically speaking, cold weather is actually better for astronomical observing, as the cool air is both drier and less turbulent than warmer air, giving a steadier image at the telescope,” said Tom Vonderharr, the head astronomy teaching assistant. The temperature limit for the observation events is a wind chill of negative 15 degrees Fahrenheit.

But evening skies have steadily attracted between 20 and 30 people every Friday night since the institute starting offering presentations during the International Year of Astronomy in 2009, Vonderharr said. Before that, he said attendance was sporadic and events were often canceled due to bad weather. Recent warmer temperatures have had a “minimal impact” on attendance.

From Tate’s rooftop, students have the chance to see some of the same celestial objects that inspired sky-gazers throughout time, including bright stars, binary stars, star clusters and even nebulas and galaxies, though city light pollution often limits what can be spotted.

The purpose of the viewing nights “is simply to engage the public in looking up at the sky once in a while. In the hustle and bustle of today’s society, few people take the time to do this anymore,” Vonderharr said.

Before looking through the telescope, graduate teaching assistants give a short presentation on comets, planetary orbits, supernovas, black holes and more. After taking time for questions, the TAs lead students into the copper-green rooftop dome.

The University’s School of Physics and Astronomy owns a 10-inch refracting telescope, said Jennifer Delgado, a graduate student and the institute’s outreach coordinator.

When Martin was a post-doctoral student in Minnesota between 2005 and 2006, he helped refurbish the telescope, which he called a “priceless antique.”

He said a 100-year-old telescope functions just as well as a new one so long as the glass objective lens still works and the device is properly maintained.

At the sky-gazing events, people can learn uncommonly known facts about objects in the sky, including what satellites are visible on a clear night and why the moon can be seen in the day, Vonderharr said. One of the primary purposes of the viewing nights is “to promote scientific literacy and education in the community,” he said.

“If something is ‘cool,’ it inspires people to learn more about it.”

Vonderharr hopes guests enroll in an astronomy class after the observational events pique their interest.

The evenings are also an attempt to convince the public that astronomy and science are worth spending tax money on, he said.

“Science seems to get a bad rap lately, and I think it all boils down to some misunderstandings of what science is and how it works,” Vonderharr said.

“Understanding our place in the universe can give us an alternate viewpoint from which to reframe global and social issues, and that can have very real effects in political policy,” Vonderharr said.

-The Associated Press contributed to this report