After earning a number two seed in the NCAA Tournament the Gophers will take advantage of playing on their home court. 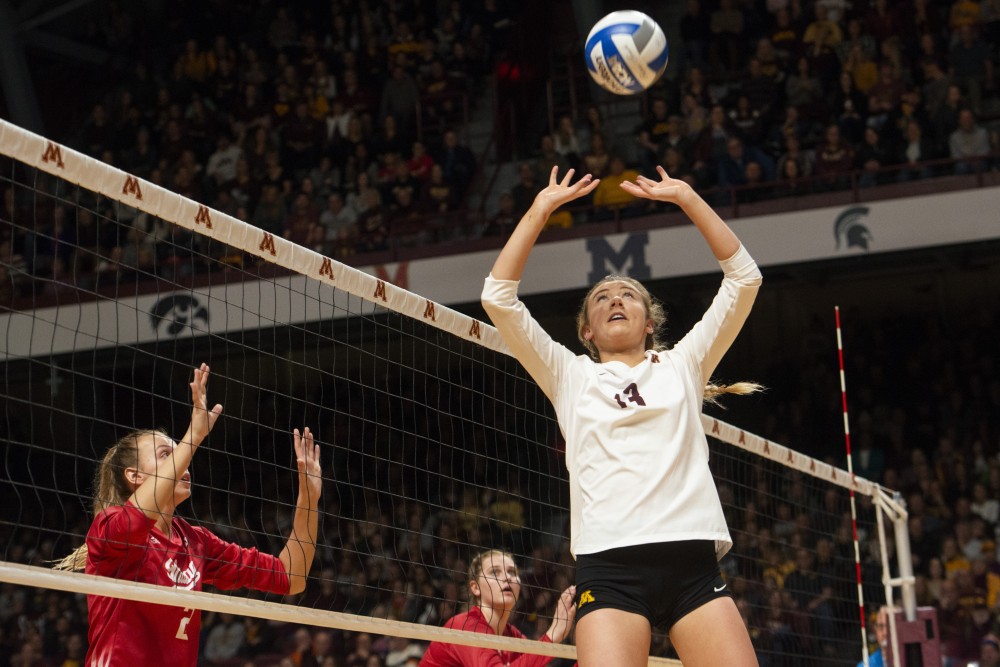 Samantha Seliger-Swenson sets the ball during the game against Indiana on Friday, Nov. 9 at Maturi Pavilion.

For the fourth consecutive season, the Gophers volleyball team will open the NCAA tournament at home.

On Sunday, in front of more than 100 family members, friends, season ticket holders and boosters in the Williams Arena Club Room, the Gophers found out they had earned the No. 2 seed in the NCAA tournament. They finished the season as Big Ten champions with a record of 25-3 overall and 19-1 in conference.

For Minnesota, this means it could potentially host every match of the NCAA Tournament in Minneapolis, including the Final Four, which is being held at the Target Center.

“I’ll speak for everyone involved: … we’re very happy that we don’t have to pack a bag anymore this year,” head coach Hugh McCutcheon said to the crowd Sunday night.

Minnesota’s tournament play begins Friday at home against the Bryant Bulldogs. South Carolina and Colorado will also be playing in Minneapolis, and the winner will take on either the Gophers or Bulldogs.

“It always helps being at the [Maturi Pavilion] in front of sold out fans that have our backs throughout the whole thing,” setter Samantha Seliger-Swenson said.

Minnesota finished the season undefeated at home for the first time since 2015.

The Gophers’ section includes teams like Big Ten foe No. 6 Nebraska and No. 17 Oregon who beat the Gophers in Sept., but the team is focusing on Bryant and nothing else.

“[We take it] one at a time, we can’t get too far ahead of ourselves,” McCutcheon said.

Last season the Gophers were knocked out in the Sweet Sixteen against USC, after making it to the Final Four two consecutive years in 2015 and 2016.

The Gophers finished the final weekend of the regular season 1-1, after dropping a match on the road at Penn State. But, they rebounded and dominated Rutgers.

“I think it was a good reality check,” Seliger-Swenson said. Along with her teammates, she hopes the learning opportunities presented on Friday will carry over into the NCAA Tournament.

“I think they really exposed some of our weaknesses and some of the things we need to work on, so I’m excited to get to work this week.”

Six of the other 63 teams selected for the Tournament come from the Big Ten. Five teams from the Big Ten, including the Gophers, received top ten seeds: No. 3 Illinois, No. 6 Nebraska, No. 7 Wisconsin and No. 8 Penn State.

Of those four teams, Minnesota downed three of them twice this season. The Gophers split the season series with Penn State.

By playing in such a competitive conference, McCutcheon says it’s primed the team for the tournament.

“The Big Ten is a really good conference, so I think it prepared us for what the tournament will be,” McCutcheon said.

Although the players are focused on the match against Bryant Friday, they’re all working together for one common goal.

“We’re all going for this national championship,” outside hitter Adanna Rollins said. “We’re so into this, and it’s here in our backyard … we’re so excited we know we want to do anything.”

For the Gophers the path to the Target Center starts Friday at 7 p.m., as the Bryant (22-12, 10-4 NEC) Bulldogs travel to the Pav to make its NCAA tournament debut.