The Gophers were down 17-3 in the match before they scored 15 points. 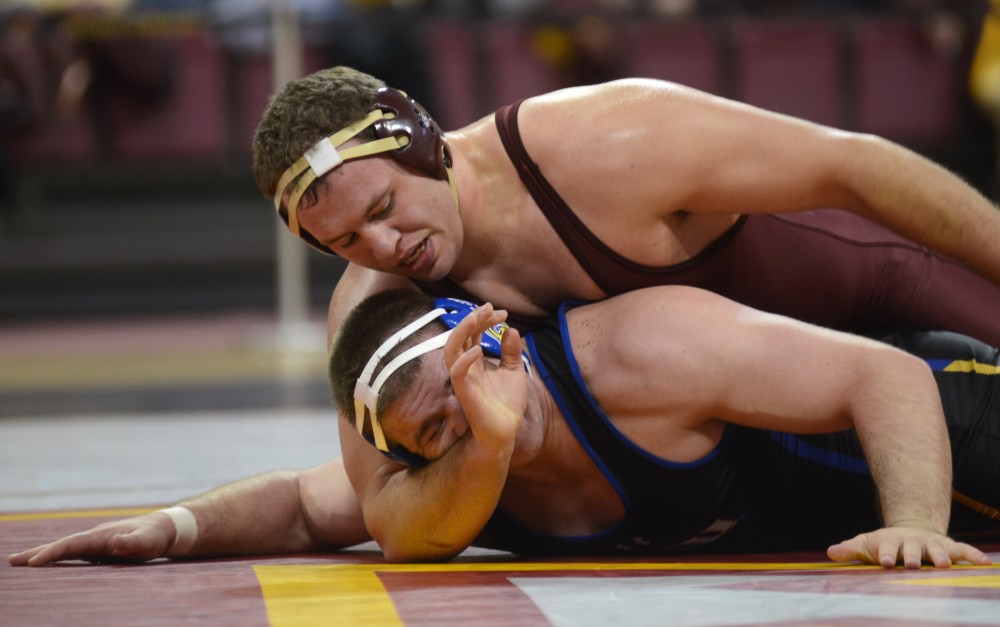 A 3-point win wasn’t going to cut it for Michael Kroells.

The No. 5 heavyweight wrestler walked onto the mat with his team facing a 17-12 deficit. The Gophers were down 17-3 earlier in the match but rattled off three-straight wins to bring the match against South Dakota State within reach.

The redshirt senior delivered for his team and defeated Alex Macki via a disqualification and gained three bonus points.

The result gave the No. 16 Gophers an 18-17 win over the No. 20 Jackrabbits in front of a packed crowd for the first match of the season at the Sports Pavilion Saturday.

“I was thinking, ‘just score as many points as I possibly could,’” Kroells said. “’Go out there, get one takedown, ride that guy out, make that guy exhausted and good things will happen.’”

Macki had five warnings for stalling late in the dual, which caused the referee to walk over to the scoring table.

“[Macki] was so concerned with not giving up the turn and not getting pinned that he completely shut down,” said interim head coach Brandon Eggum. “It was exciting. Kroells was pumped up.”

Kroells and the arena waited in suspense before the referee walked back and raised Kroells’ arm in the air.

His teammates quickly left the bench and swarmed around Kroells to celebrate the comeback victory.

“I wasn’t 100 percent sure [I had won],” Kroells said. “For some reason, I thought they had gotten rid of that rule. Someone mentioned five stallings, and it was a moment of tension. I didn’t know what was going to happen.”

The improbable victory wouldn’t have been possible without the aid of three earlier wins by No. 17 Nick Wanzek, Bobby Steveson and No. 2 Brett Pfarr.

“We knew on paper that they were favored in the bottom half,” Eggum said. “It was tough at halftime going into the locker room. Guys were quiet. It was, basically, ‘You could … sit on your hands here or you could go out there and do something about it.’”

Minnesota still needed three more wins after the upset by Wanzek and called on redshirt freshman Steveson at 184 to go against Martin Mueller.

Steveson gained his first career dual win with an 8-3 decision over Mueller.

“It was something I thought about all day, all week,” Steveson said. “I wanted to get that first win out of the way. With how loud the crowd is, it certainly helps momentum.”

Kroells won his match and the Gophers had won the dual in their home opener.

The victory marked the first win for the Gophers since 1986 without former head coach J Robinson at the helm.

“We knew the upper-weights were capable of [coming back],” Eggum said. “That’s a tough thing to do when momentum’s going the other way, but they stopped it and got it in our direction. That was an exciting finish.”