Minnesota has a chance to end road woes this weekend 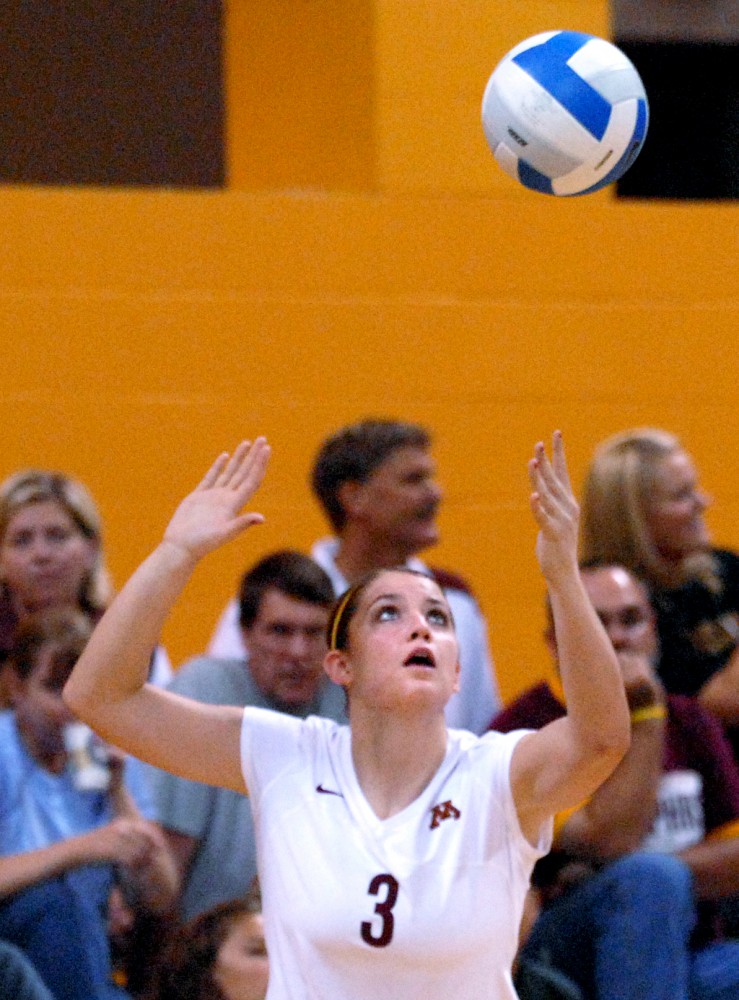 After a solid weekend at home, the Minnesota volleyball team will once again hit the road this weekend, hoping to shake an unpleasant trip two weekends ago. Having lost their last three road matches, the No. 15 Gophers will attempt to turn things around as they head to Wisconsin on Friday and Northwestern on Saturday. Both matches begin at 7 p.m. âÄúItâÄôs not that weâÄôve been playing poorly on the road,âÄù coach Mike Hebert said of the streak. âÄúThe difference has been that thereâÄôs always a point during the match where your opponent pushes you and goes on a run. ItâÄôs how you respond to those that determines who will win. We havenâÄôt responded well to those moments on the road.âÄù Minnesota will look to do just that, and can do so with the new, balanced offensive attack it showed last weekend at home. âÄúWe were becoming really predictable,âÄù junior libero Christine Tan said. âÄúTeams scout as much as we do, and itâÄôs pretty obvious who our key players were. After having two weeks of practicing it, itâÄôs really come together here, so IâÄôm excited to see how it keeps going.âÄù In the new offense, outside hitters take swings on both the left and right sides of the net, the set distribution is more balanced between players and, in a new development, senior setter Rachel Hartmann is getting into the offense, collecting kills as well as assists. âÄúThe hardest thing for a team to defend is a team with more than one or two great hitters,âÄù Hartmann said. âÄúIf thereâÄôs one or two, you can find ways to stop them, but if you have to defend every single person who can be a part of the offense, including the setter, itâÄôs very hard to defend.âÄù Another change the Gophers have made comes in the serve-receive game, as Tan said in some rotations, Minnesota has just two passers, instead of the normal three-passer system. Tan said this helped avoid any confusion, and said it could aid the Gophers in passing against WisconsinâÄôs tough home serving. Last year, the Badgers took advantage of the room beyond the service line, serving tough floaters to force Minnesota out of its offense. With the success Wisconsin saw last season, the same can be expected this year. âÄúWe havenâÄôt seen a lot of deep serving yet this year,âÄù Tan said. âÄúBut we havenâÄôt had any real problems with what we have seen.âÄù Hebert said the Gophers will still be wary of it, however, and said practice time would be spent receiving this type of serve. âÄúWeâÄôll just let the coaches go back and bomb serves from as far back as they can,âÄù Hebert said. âÄúItâÄôs not that itâÄôs that tough to receive, but compared to the normal serving patterns, the timing and movement of the ball is a little different.âÄù Wisconsin (16-10, 6-8) is having a little bit of a rough conference season, but hasnâÄôt struggled as mightily as Northwestern. The Wildcats (8-17, 2-12) started their conference season at Minnesota, getting swept by the Gophers to begin a six-match conference losing streak. But Northwestern has shown signs of life, sweeping Michigan State in its last home match, and topping No. 17 Illinois at Illinois earlier in the year. âÄúIt would be a huge mistake for us to take Northwestern lightly,âÄù Hebert said. âÄúThey have a young team, but it may decide to mature this weekend. They may beat us, but it wonâÄôt be because weâÄôre complacent.âÄù