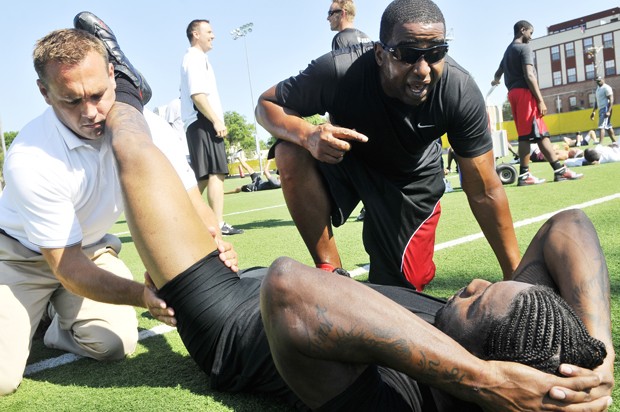 If the opinion of some of the best receivers to play the game of football has any merit, then former Gophers receiver Eric Decker should have a bright future in the NFL. Decker, MinnesotaâÄôs all-time leading receiver and the Denver BroncosâÄô third-round pick in AprilâÄôs NFL draft, was one of several NFL players participating in Arizona Cardinals All-Pro receiver Larry FitzgeraldâÄôs unofficial camp at the Bierman athletic facility last week, where he impressed a few current and future Hall of Fame receivers that were conducting the drills. âÄúHe wants to do everything the right way, [and] guys like that you like,âÄù Dallas Cowboys Hall of Fame receiver Michael Irvin said . âÄúWhen he gets to Denver, heâÄôll listen to anybody that tells him what it takes; and thereâÄôs the difference between being a bust and making it in this league.âÄù Joining Irvin at the camp was the Minnesota VikingsâÄô all-time leading receiver Cris Carter , who said he can tell that Decker was well-coached in Minnesota, but his intangibles also indicate that he will have success. âÄúLast year, I met him out here, and he was just coming off baseball, and he was hurt, and he was so upset [because] he couldnâÄôt do anything, but I could see his fundamentals,âÄù Carter said. âÄúThereâÄôs something about him âÄ¦ a lot of times with a receiver, you canâÄôt put your finger on it, but you know heâÄôs going to be a good pro.âÄù Some projected Decker to be a first-round selection until he tore a ligament in his foot last October, sidelining him for the second half of his final season with the Gophers. The camp last week was the first time he has been able to run routes since the injury. Since being drafted 87th overall in April, Decker has been working out with a strength coach to stay in shape while rehabbing his foot to be ready for training camp in late July. The fact that Decker has been able to stay in shape despite his injury doesnâÄôt surprise Fitzgerald. âÄúDeckerâÄôs just a mentally tough guy,âÄù Fitzgerald, a Minneapolis native, said. âÄúEver since I got to know him last year, IâÄôve seen his pedigree and his work ethic, and I think weâÄôre all seeing that, and weâÄôre going to see more of it as the seasons go.âÄù The Broncos traded away Brandon Marshall âÄî their leading receiver each of the last three seasons âÄî during the offseason but used their 22nd overall pick in the draft to pick up wide receiver Demaryius Thomas of Georgia Tech and have several veterans still on the roster such as Eddie Royal, Jabar Gaffney and Brandon Stokley . But despite the relative depth at the position in Denver, Decker is confident he can make an impact in some capacity. âÄúThey give you an opportunity to compete with others in training camp, and itâÄôs what you make of it,âÄù Decker said. âÄúMy biggest thing right now is getting healthy and getting that opportunity to compete for [a spot] on the team and help them out.âÄù The camp is modeled on CarterâÄôs FAST program, which was co-founded by FitzgeraldâÄôs trainer Bill Welle and has been held on the Minnesota campus for two years. In addition to the immense amount of conditioning involved in the camp, Decker said he has been learning some of the technical aspects of being a receiver. âÄúYou just pick up a lot of tips about getting off the line of scrimmage, against press coverage, getting out of cuts … itâÄôs just all technique work that they teach you,âÄù he said. âÄúThe biggest thing, too, is how to finish when youâÄôre tired … because when you get to week 16 or 17, youâÄôll see what you have left.âÄù Also participating Thursday were Minnesota alumni Matt Spaeth (Pittsburgh Steelers), Wayzata native James Laurinaitis (St. Louis Rams), Dwayne Bowe (Kansas City Chiefs), Malcolm Jenkins (New Orleans Saints) and Minnesota Vikings Tavaris Jackson, Jaymar Johnson and Madieu Williams. Former Gophers linebacker Simoni Lawrence , who is currently with the Philadelphia Eagles, was also in attendance as well as several rookie free agents. Former Gophers Jeff Tow-Arnett and Barrett Moen , who were recently cut by the Tampa Bay Buccaneers and Seattle Seahawks, respectively, also participated. Joining his former teammates in the camp was former Gophers tight end Nick Tow-Arnett, who was recently released by the Cowboys after injuring his knee. Tow-Arnett said he is just waiting on a call from anybody to join their training camp later in the month. Tow-Arnett said he has been keeping in touch with his former coaches at Minnesota and that they have been giving him some encouraging advice. âÄúItâÄôs one of those things [where] I canâÄôt do anything else right now besides just hear back,âÄù Tow-Arnett said. âÄúTheyâÄôre just saying, âÄòBe patient, keep your head up, and youâÄôll be alright.âÄô âÄù