About 200 protesters marched from Mayday Books to the Republican Party of Minnesota headquarters to raise awareness about Islamophobia and protest CVE. 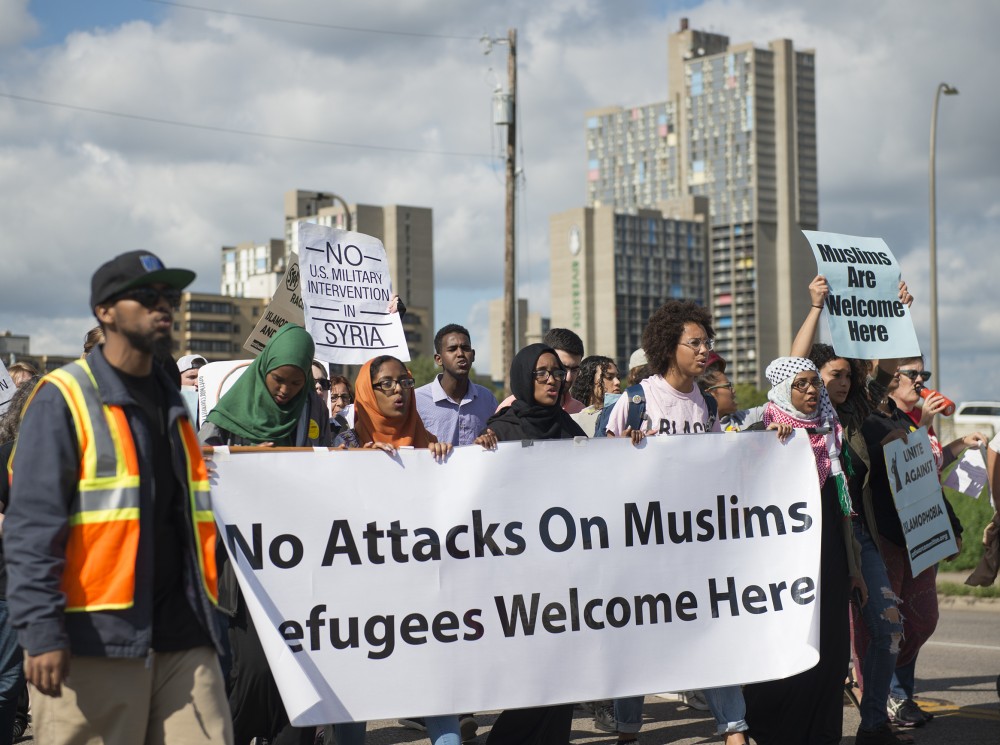 Protestors march against islamophobia on Minnehaha Avenue on Saturday, Sept. 17, 2016.

About 200 demonstrators marched through Minneapolis’ West
Bank Saturday to rally against Islamophobia.

Beginning around 1 p.m., demonstrators met outside Mayday Books for
opening speeches. Afterward, they marched to the Republican Party of Minnesota
headquarters on Franklin Avenue and chanted phrases including, “No racist war,
no war no more, defend our civil rights.”

The demonstration began with about 200 people, surging to 250 throughout the march, with passersby joining in.

“This is an important protest. People came out of their
homes to join the march and that’s a powerful thing,” said Matt Boynton, a
University of Minnesota graduate student and a member of Students for a
Democratic Society.

The march was geared toward raising awareness against
Islamophobia in the United States, protesters said. Protesters passed
out flyers calling to end the Countering Violent Extremism program — described as racist and Islamophobic in the group’s literature.

The federal pilot program — as described by the Department of
Justice on its website — consists of community leaders working to “eliminate
conditions that lead to alienation and violent extremism … and reject
destructive ideologies.” The department launched the program in 2014 in Boston,
Los Angeles and Minneapolis.

“CVE is part of the growing national security, and
the program will continue as long as Islamophobia goes unchallenged in the
media, politics and broader American culture,” the handout read.

The rally was also intended to raise awareness
about other social movements like Black Lives Matter and protests against the
Dakota Access Pipeline Project.

Minnesotans Against Islamophobia and the Anti-War Committee
co-sponsored the event. Meredith Aby-Keirstead, who said she has been an
anti-war activist for over 20 years, assisted in organizing the event.

“I went to Cleveland to protest the Republican National Convention
and I wanted to bring that fire here to Minnesota. I wanted to help organize
for something where people could stand together so they know they wouldn’t be
alone.” Aby-Keirstead said.