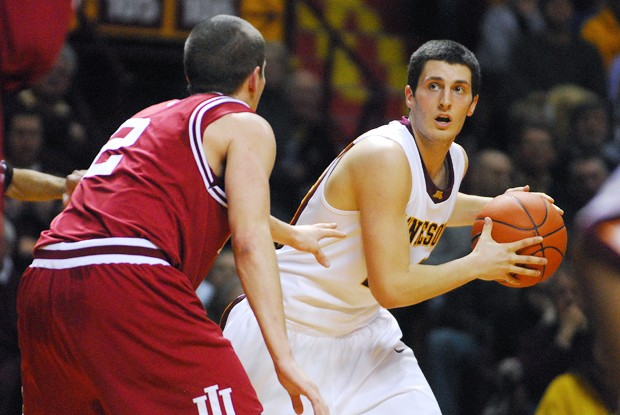 Looking at the game ahead of time, it looked like there were several ways Michigan could beat the Gophers. Three-point shooting wasnâÄôt one of them. The Wolverines came into Thursday nightâÄôs game as the worst three-point shooting team in the Big Ten, but made 13 of them in their 74-62 win over Minnesota. The Gophers (19-7, 7-7 Big Ten) lost for the fourth time in five games, and for the fourth time in a row on the road. Michigan came into the game shooting just 31.7 percent from three-point range, but went 13-for-28 (46.4 percent) on Thursday. Freshman Zack Novak scored all of his game-high 18 points on six threes. Novak, who came into the night averaging less than seven points per game, probably wasnâÄôt on the top of coach Tubby SmithâÄôs scouting report. That honor surely went to guard Manny Harris, whom many consider the Big TenâÄôs best player and the second-leading scorer in the conference. The Gophers held Harris, who spent much of the second half on the bench in foul trouble, to just eight points. âÄúIf you told me we were going to hold Manny Harris to eight points and force five turnovers from him, then I wouldâÄôve thought weâÄôd have a chance,âÄù Smith told WCCO Radio after the game. âÄúBut obviously theyâÄôve got a better team [than that].âÄù The Gophers trailed by seven with just under three minutes left in the first half, but Michigan ended the half on a 10-2 run and their lead never dipped below 13 until the final minute. The Gophers couldn’t keep up with MichiganâÄôs three-point barrage, going just 1-for-10 in the first half. Some things did go right for the Gophers, though. They committed just 12 turnovers, down from 19 in each of their past two games, in what have been perhaps been their biggest boon. True freshman Devoe Joseph continued to emerge as a scorer, leading the Gophers with 14. Leading scorer Lawrence Westbrook ended a four-game scoring slump and finished with 12 points, four assists and four rebounds. âÄúWe did some things better but weâÄôre really not playing very smart,âÄù Smith said. âÄúTonight our offense was much more fluid, though.âÄù The loss was another major blow to the GophersâÄô tournament chances, which three weeks ago looked like a lock. After SaturdayâÄôs loss to Penn State, most experts said the Gophers were still locks, but barely. Now, with four games left, theyâÄôll have to play their way in. Lineup change Smith changed his starting lineup for the first time in the Big Ten season, replacing freshman center Colton Iverson with forward Paul Carter. âÄúThat didnâÄôt work, obviously,âÄù he said.