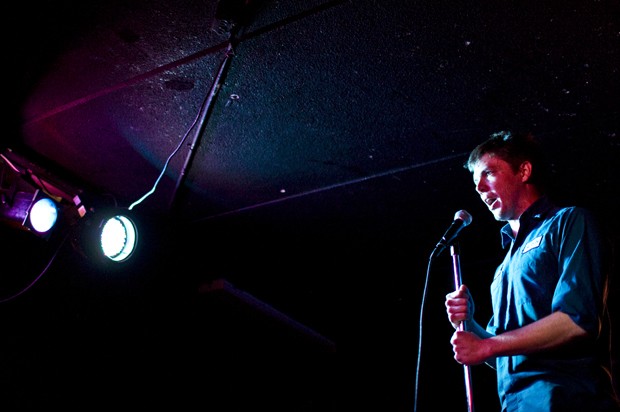 The city of Minneapolis made a change to its licensing laws that is sure to give residents a reason to laugh. The Minneapolis City Council changed its licensing practices Friday to allow establishments with a class A, B, C and D liquor license to feature solo comedians. Prior to the change, only venues with a class A license âÄî the most expensive and difficult to obtain âÄî were allowed to feature live comedians. Only 87 establishments in Minneapolis have a class A license, according to city documents. The license, which permits adult entertainment, stage or theatrical shows, skits, contests and dancing, also comes with more than $10,000 in annual fees, a price tag that is too high for most venues. However, with the councilâÄôs recent change, 244 venues can now allow comedians to grace their stage. âÄúWeâÄôve found that the intent of having class A license for those bigger, theatrical performances may have, because of the wording, included these single standup comedians and that was really not the intention,âÄù Linda Roberts, district supervisor in Minneapolis said. âÄúWe found that the classification didnâÄôt need to be that high, and this will be only a positive for businesses and comedians.âÄù

Comedians taking a stand
A change at the city level didnâÄôt happen on its own. Local comedian Bob Edwards spent more than five years doing stand up in a dark basement room in the Corner Bar on the West Bank a s part of the Comedy Corner Underground . However, a routine inspection by the city of Minneapolis shut the show down last November in compliance with the licensing law. Three days later, the city shut down another comedy room at the Spring Street Tavern . Edwards, along with a coalition of other comedians, decided it was time to change the cityâÄôs laws that they felt were antiquated. âÄúFor a while we were thinking about doing mock protests with signs that said âÄòImpeach NixonâÄô or things that are just ridiculous,âÄù Edwards said. But discussions with other comedians lead Edwards to pursue the âÄúproper routesâÄù to change the law. Edwards worked with city licensing and regulatory officials on a proposed change, and after almost half of a year, the proposal went to the cityâÄôs Public Safety and Regulatory Services committee on July 8, where comedians goaded members to change the law with humor. âÄúWe basically just made them laugh for a half an hour,âÄù Edwards said of the meeting. The method worked. The change passed unanimously among its members and headed straight to the council for approval. Edwards and other comedians are already planning a comeback show at the Corner Bar for Aug. 1, calling it the “Godfathers” showcase, featuring all of the comedians who ran the underground room for the last five years. And not only did Edwards and his team get comedy back at the Comedy Corner Underground, they doubled the number of venues that could perform comedy in the city, a move that has some University of Minnesota students and venues thinking about how it will impact them.
University venues, students consider comedy
Downtime Bar and Grill in Dinkytown âÄî which has a class C license âÄî has been interested in bringing live comedy to their establishment for a long time. âÄúWe want expand what weâÄôre doing so we are not stuck in a rut booking the same bands all the time,âÄù Chris Shaffner, manager of Downtime said. âÄúWe want to bring in new crowds.âÄù The barâÄôs inspiration for a comedy night came from GrumpyâÄôs Bar and Grill in downtown Minneapolis, whose Wednesday open mic nights draw in a fair crowd, manager Ty Lahr said. And while campus establishments like Burrito Loco Bar and Grill, KafÃ© 421, Blarney Pub and Grill and SallyâÄôs Saloon and Eatery donâÄôt think live comedians would fit in their weekly lineups, they all agree that the change was the right thing to do. âÄúEstablishments like this are about entertainment,âÄù Mike Mulrooney, owner of Blarney said. âÄúOnce you provide entertainment you can draw more people in and it gives them a better option than just sitting around, and it could draw in more business for businesses.âÄù Acme Comedy Company, a comedy venue in the Minneapolis Warehouse District, isnâÄôt worried about an increase in venues or competition. Instead, they say they are excited about the change and having more options for comedians to hone their live performance. âÄúWe really see comedy as an art form at Acme and the quicker local comedians can develop their stage presence the better their show will be and that will benefit the scene citywide,âÄù Sarah Remus, Acme manager, said. University alumnus Andy Erikson agrees. Erikson, a recent graduate of the University with a degree in graphic design, performs at clubs around the cities and said sheâÄôs excited to have more opportunities. âÄúIt will be nice to have venues to perform at regularly and I think it will open up more places to having comedy,âÄù Erikson said. âÄúAnd if anyone doesnâÄôt know about the law comedians can give them a call and say, âÄòhey, you donâÄôt have to worry, itâÄôs been changed.âÄôâÄù