Employees from the Minneapolis franchise are leading the movement for better work conditions. 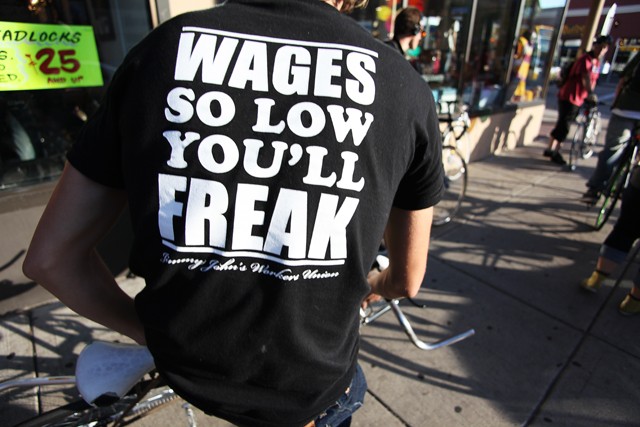 Davis Ritsema mounts his bike during a protest on Saturday in Minneapolis. Employees from a Minneapolis Jimmy John’s franchise formed a nationwide union to fight for better working conditions.

Employees from Minneapolis Jimmy John’s sandwich shops formed a labor union Thursday to fight for better working conditions, and this week their cause is going national.

Minneapolis franchise owners have not recognized the union. Its demands include a pay increase, consistent scheduling, sick days, “no-nonsense” workers’ compensation for job-related injuries, an end to sexual harassment and “basic fairness on the job,” according to the union.

The Minneapolis franchise pays many workers $7.25 an hour, federal minimum wage. The workers want more. The Jimmy John’s Workers Union will host a National Week of Action, picketing and leafleting in 32 of 39 states with Jimmy John’s restaurants.

If the group files for election with the National Labor Relations Board and wins, the government will then force Jimmy John’s to recognize and negotiate with the union, according to David Boehnke, an employee of Jimmy John’s.

The Jimmy John’s Workers Union is the first fast food union in the history of the nation, according to representatives from the Industrial Workers of the World (IWW), a labor union affiliated with the group.

The owners of the Minneapolis franchise, Rob and Mike Mulligan of Miklin Enterprises Inc., were unavailable for comment but told the group they “offer competitive wages and take issue with the union,” according to Davis Ritsema an employee at a Minneapolis Jimmy John’s location.

Union members have said they will continue to protest until the Mulligans agree to meet to discuss the employees’ demands.

The Jimmy John’s Workers Union estimated on its website that Miklin, Inc. made at least $2.3 million in profit from its nine stores last year and plans to open four new stores at an estimated cost of more than $1.2 million.

“If Mike and Rob Mulligan have the money to open four new stores, they have the money to pay us more than minimum wage,” Jake Foucault, an employee of a Minneapolis Jimmy John’s location, said in a union press release.

One of the new locations will be in Stadium Village on Oak Street, in a building that has been vacant for the past year.

Since the union went public on Thursday with a rally outside the Block E location, the group has organized three protests in Minneapolis.

The Thursday rally, with at least 80 picketers, was followed by a “solidarity bike ride” on Saturday, when 30 employees biked to six locations to congratulate members on becoming a union. That ride ended with a picket of 45 people in front of the Uptown store.

The group participated in a Labor Day rally on Monday at the University of Minnesota to promote their cause on campus.

Not everyone is on board, however.

Samantha Alarcon, an assistant manager at the Uptown Jimmy John’s, said she doesn’t agree with the protests.

“I do agree that some things could be better, but there’s pay cuts all over [the nation], and they need to understand that,” she said.

Emily Przybylski, an employee of a Minneapolis Jimmy John’s and student at the University, said the majority of the franchise’s workers support the cause and estimated that 25 percent of the workers are students at the University, who could use an increase in pay.

“I’d be able to not have to work so many hours while going to school and still be able to pay for my tuition and bills,” Przybylski said. “It would take a lot of stress out of my pack of worries.”

Przybylski said the group had chosen to affiliate with IWW because of their success with Starbucks employees in a similar situation.

According to David Boehnke, an employee at a Minneapolis Jimmy John’s, Starbucks employees were given a dollar raise in New York and Chicago when their union went public and have been able to prevent unfair disciplinary practices for organizing.

“But this is much stronger than that,” he said. “We have way more power. There are way more of us, and we have every store in the franchise working with us.”