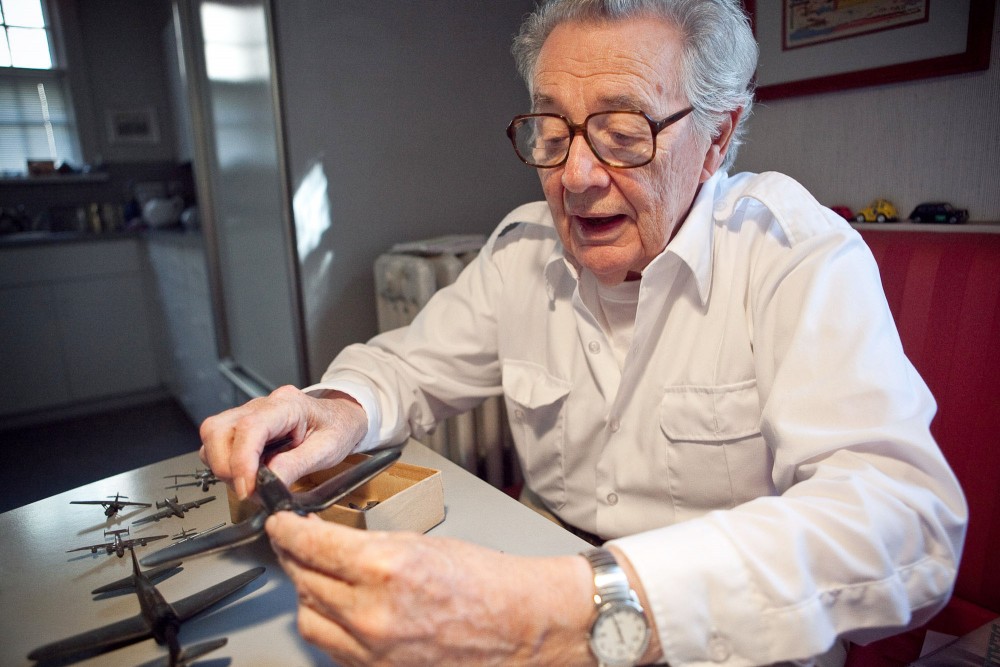 Professor John Hart shows the different model planes he used to teach other sailors with during World War II Saturday morning at his home in Edina. Planes like these helped sailors determine enemy planes from American.

John Fraser Hart grinned as he examined a World War II model aircraft for the first time in 20, maybe 30 years.

âÄúI loved to watch [the real ones],âÄù he said.

The University of Minnesota geography professor and veteran swiped the collection of model airplanes from the aircraft carrier he served on, a commonality he called âÄúmidnight requisitioning.âÄù

He said they were destined to be âÄúdeep-sixedâÄù anyway âÄî the U.S. Navy discarded things like model planes because it wasnâÄôt worth the effort to bring them home.

âÄúI thought they were more useful to me than they will be to Davy JonesâÄô Locker,âÄù he said.

Hart, a University professor for more than 44 years, is possibly the only World War II veteran still teaching full time at the University, said his colleague John Adams.

Hart specialized in identifying aircraft and teaching the men on his ship how to tell the good guys from the bad guys.

Unlike the thousands of World War II veterans who poured into American colleges and universities after the war with their GI Bill benefits, Hart had already earned his undergraduate degree before he enlisted.

He entered the U.S. Navy in 1943 at 19 years old, already a graduate of Emory University.

âÄúI didnâÄôt want to be drafted,âÄù he said.

Hart said he was one of the âÄú90-day-wondersâÄù âÄî groups of men who undergo intense 120-day training to be commissioned as naval officers.

âÄúThe basic goal of midshipmenâÄôs school was to break us,âÄù he said. âÄúWe were going to be in intense situations under extreme pressure, and the idea was to subject us to the maximum amount of pressure before we joined the fleet.âÄù

In each class, at least one person had a nervous breakdown, Hart said, but it was better to do it there than in the Pacific Ocean.

He said Columbia University, which hosted the midshipmenâÄôs school, was one of many colleges that transformed into training schools for officers during the war.

âÄúThe facilities were there but there were not students,âÄù he said. âÄúThe students were in the service.âÄù

Hart said he spent about two years aboard a ship âÄúwandering the Pacific Ocean.âÄù He said his aircraft carrier, a type of warship that acts as a sea base for aircraft, went wherever the fighter and torpedo planes it carried were needed.

His job was to identify airplanes as either âÄúgood guys or bad guys.âÄù Hart said he used the model airplanes to train sailors to recognize an aircraft.

He said most of the time, some of the men on board were âÄúsuperfluousâÄù âÄî they were only needed when they were âÄúshooting the guns.âÄù

After World War II, Hart joined the occupations in Japan and China.

He said the U.S. Navy hated Gen. Douglas MacArthur because he refused to let the Navy go ashore.

âÄúI looked at [Japan] for 30 days, but never set foot on the shore,âÄù he said.

Part of that time was also spent bringing troops home, just a âÄúpart of the job.âÄù

Officers enlisted for the duration of the war, he said. No one was told of their return date.

âÄúWe were glad to see the end of each other; glad to get home and get back to what we wanted to be doing,âÄù he said.

âÄúMy executive officer said, âÄòIn a year youâÄôre going to be digging ditches because you wonâÄôt be able to get any other job,âÄô” he recalled.

But he was one of the few who had already finished his undergraduate degree. After he was discharged in the summer of 1946, Hart went to graduate school at Northwestern University, where he met his wife.

After he received his doctorate in geography in 1950, he taught at the University of Georgia for six years, where he taught many student veterans.

He said he became a professor by default âÄî he didnâÄôt know what he wanted to be.

In 1967, after 12 years at Indiana University, he began teaching geography at the University of Minnesota.

âÄúHeâÄôs old-fashioned in some ways, but the extent of his knowledge about whatâÄôs going on in this country is just encyclopedic,âÄù said Adams, who has worked with Hart for more than 40 years.

Students in his Geography of U.S. and Canada class agree that HartâÄôs teaching method is unique.

âÄúHeâÄôs definitely unlike any other teacher IâÄôve ever had,âÄù said Stacy Luedtke, a communications junior.

She said Hart, who often sports a bow tie and suit, inspired her to explore and learn from experiences instead of just reading textbooks.

Hart can point to each of the 15 faces on the cover of his 2003 book âÄúThe Changing Scale of American AgricultureâÄù and tell you a story:

âÄúHe made possible the recovery of cotton in the South by eradicating the boll weevil.âÄù

The professor said he most enjoys sharing what heâÄôs learned from his travels around the country.

âÄúMost of the fun IâÄôve had has been simply going around the country talking to people, looking at things and asking questions,âÄù Hart said.

He lives in Edina, Minn., with his wife of more than 60 years.

As a Naval Reserve officer, Hart was required to attend two-week stints of duty each summer for the 20 years he was active to see âÄúhow the modern navy operates.âÄù

Now a retired officer, he said he is still subject to military orders and disciplines.

He keeps memorabilia like his medals, or âÄútravel stickers,âÄù his collection of swiped model World War II aircraft and his uniform.