Minnesota used a strong defensive effort to beat the Hawkeyes and bounce back to .500 in the Big Ten. 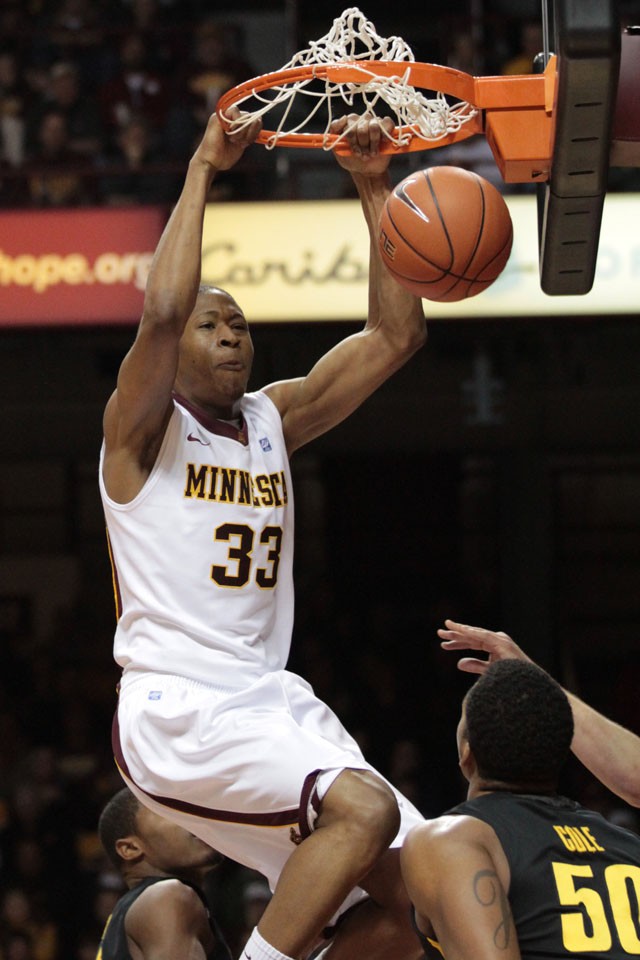 In a game of runs, the Gophers menâÄôs basketball team simply had too much fire power as it beat rival Iowa, 69-59, before a sellout crowd at Williams Arena on Sunday.
With the win, the Gophers (14-4, 3-3 Big Ten) improved to .500 in conference play and avoided a letdown following ThursdayâÄôs upset over No. 8 Purdue.
The Gophers cruised to a 30-19 halftime lead behind a 13-0 run toward the end of the first half that included two big dunks from sophomore Rodney Williams.
But the Gophers came out sluggish in the second half, and the Hawkeyes climbed back into the game with a 13-2 run to open the second half.
âÄúWeâÄôre not a great team that can just close you out,âÄù Gophers coach Tubby Smith said. âÄúWe donâÄôt have the depth any more to just keep the hammer down.âÄù
With 14 minutes left, Iowa took a 39-37 lead on a jumper from Melsahn Basabe, who finished with game highs of 20 points and 13 rebounds.
Basabe wasnâÄôt enough for the Hawkeyes to steal a win from the Gophers, whose ended up having enough depth to win (Iowa had zero bench points). After falling behind, Minnesota went on a 23-6 run to take a lead it wouldnâÄôt relinquish.
âÄúSome tough early games at the beginning of the season helped us prepare for these close games in conference,âÄù said junior Trevor Mbakwe, who led the Gophers with 16 points and 12 rebounds after coming off the bench for a second consecutive game as part of his punishment for an arrest made Monday on a misdemeanor charge. âÄúSometimes we have to settle it down and do what we do best.âÄù
What the Gophers hope to do best is play stout defense, and they held the Hawkeyes to just 37.2 percent shooting.
Ralph Sampson also had one of his best efforts on both ends of the floor this season. The junior center finished with 11 points, seven blocks, six rebounds and four assists. The Gophers are now 22-0 when Sampson has at least three blocks.
âÄúThey always say defense wins championships,âÄù Sampson said.
The Gophers looked impressive at times, but other teams might take notice of their inability to put games away. They led 60-46 with three minutes left, but the Hawkeyes closed the gap to just six after an 11-3 run. The Gophers hit enough free throws (27-of-37 for the game) to avoid the upset.