The decline of freshman health

Good news freshmen: you’re more stressed than ever, according to a story published in today’s New York Times.

Data collected over 25 years from more than 200,000 freshmen shows a decline in emotional health in first year students at four-year colleges. “The American Freshman: National Norms Fall 2010,” from the Higher Education Research Institute shows the amount of freshmen who feel their emotional health is above average has shrunk to an all-time low since 1985. 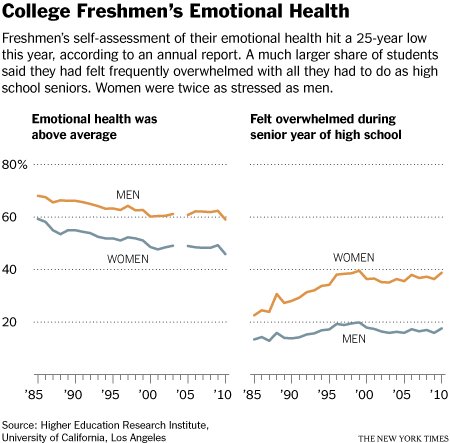 And men seem to be coping with the stress of class and tuition better than women. More women said they felt overwhelmed during their senior year of high school, and said their emotional health was below average.

The rise has been linked to the economic turmoil, concerns about paying for tuition and bleak job prospects after graduation.