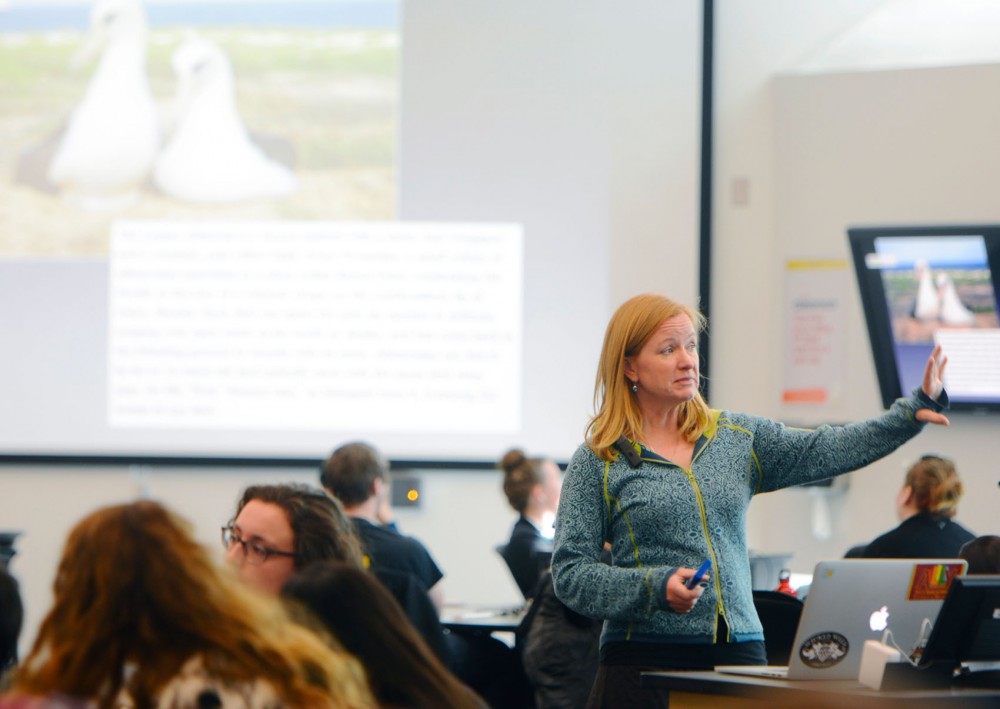 University professor Sehoya Cotner describes a study about homosexual relationships in a species of bird during her Evolution and Biology of Sex class on Monday morning in STSS.

Sehoya Cotner is more comfortable talking about sex than her own accomplishments.

And that attitude has landed her one of the most prestigious teaching awards at the University of Minnesota.

The Evolution and Biology of Sex, a class she started with another professor in 2007, has become so popular with non-science majors that the University awarded Cotner the Morse Alumni Award for Outstanding Contributions to Undergraduate Education, which will place her in the Academy of Distinguished Teachers.

The Board of Regents will recognize Cotner and seven other award recipients April 16. Each will receive a one-time $15,000 prize.

“It’s fun to make other people uncomfortable,” Cotner said. “Evolution … molecular genetics, DNA and how it works; you can totally teach that from the lens of sex and also do it in an incredibly contemporary way.”

One reason Cotner said she designed the class was to engage with students who aren’t interested in science and just take the class for the biology credit. She calls them “science foes” and said they’re some of her favorite students to teach.

Properly understanding science is a fundamental part of students’ educations, she said, which is why a biology course is required for a liberal arts education at the University. Many of the non-majors who attend her class don’t understand that yet, she said, and she believes helping them learn that could make them better people.

Cotner said she’s surprised she won the Morse Alumni award because most of the professors she’s seen win it have had research careers more accomplished than hers. More than 360 professors have won the award in its 49-year history.

But now that she’s won, Cotner said she plans to use the money for a trip with her family — something to “create memories.”

Journalism senior Ehren Minkema needed to fulfill his biology credit in order to graduate this semester and said Cotner’s class immediately stuck out to him.

“I went on to Rate My Professors, and Sehoya has, perhaps by far, the best reviews out of any of the options that I had,” he said. Cotner rates four out of five on the website.

The class uses fun topics to learn basic scientific methods, such as forming and testing hypotheses, Minkema said. In last week’s lab, students tested theories about the shapes and functions of human genitalia by using sex toys, he said, and this week they’re testing theories about human mating habits by observing personal ads on Craigslist.

Biology teaching assistant Paul Nelson has known Cotner for three years, and he said part of what makes her class so successful is her enthusiasm and passion in both the topic and her students.

She’s also very open to trying out new ideas and breaking away from established structures, he said, which is one reason he chose to be a TA for her class.

Minkema said he’s glad he chose to take Cotner’s course for his biology credit, even if some of the labs made him uncomfortable.

“I asked the professor to play some Marvin Gaye to set the mood for that class,” he said. “And of course, she did.”

It’s not just about sex

Biology professor Randy Moore teaches Biology of the Galapagos with Cotner. It’s a summer class in which they take biology students to the Galapagos Islands to conduct observational research experiments.

When Moore started the class nine years ago, he said, everyone he approached to help him develop it told him it wouldn’t attract enough students and the trip would be too expensive.

But he said when he told Cotner about the idea, she simply said, “I’m in.” Now the class fills up within a few hours or days every year, Moore said.

Moore, who’s been at the University for 34 years, said Cotner is one of the most productive professors he’s worked with.

“What separates her from so many other people is her attitude that she just likes to get things done,” he said.

Cotner’s fellow ecology professor and husband, Jim Cotner, said he sometimes can’t believe how productive his wife is both on and off the job.

“It kind of blows me away how much she’s able to accomplish, not only professionally, but personally as well,” he said. “She’s not just a professor, but she has kids and is a good mom. She runs to keep in shape. It’s amazing.”

Editor’s note: Ehren Minkema previously worked at the Minnesota Daily in an unpaid marketing position. His job responsibilities fell outside the editorial department.