The Gophers wrestler is risking his eligibility to pursue his passion. 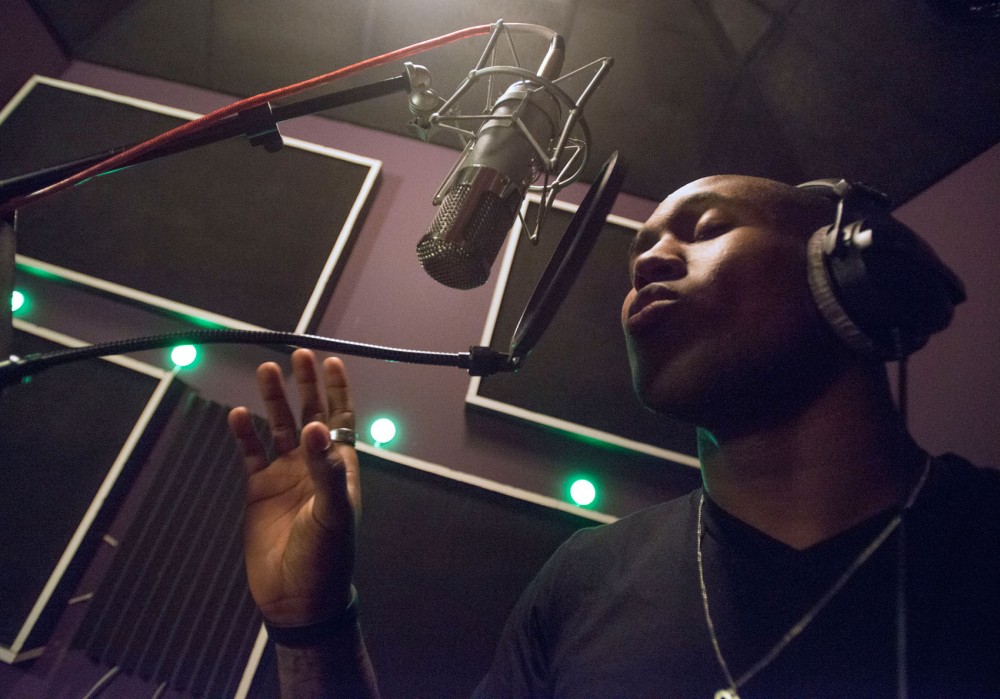 Musician and Minnesota wrestler Joel Bauman rehearses in the studio on Monday, June 10, 2013, in Minneapolis. By performing music under his own name and identifying himself as a Minnesota wrestler, Bauman was ruled ineligible to compete by the NCAA this past season.

Joel Bauman made national headlines earlier this year as the college wrestler who chose music and the chance to inspire others over a career on the mat.

Nearly four months later, Bauman has not lost his vision.

“It’s only grown from all these other things that have happened to me,” he said, with the same sense of conviction with which he always speaks.

It’s a better position than Bauman was in four months ago with the NCAA.

He received a letter from the University of Minnesota compliance that said he wasn’t allowed to use his name in his mu­sic. Bauman had to take down his music or use an alias to maintain his eligi­bility with the Gophers.

Bauman chose not to comply with either re­quest.

“This is bigger than me,” he said in Febru­ary. “I know my calling to make a difference is big­ger than my eligibility.”

His vision made waves on the national stage, but it also caught the eye of FAME President Jay Es­cobar, who said he has worked with big-name art­ists like the Black Eyed Peas and Taio Cruz.

“There is a lot of at­traction to a person that can make positive music,” he said. “I saw Joel and he has the raw talent, he takes care of himself, he looks the part and he has a positive message.”

Bauman’s song “Ones in the Sky,” which he re­leased in December, has amassed nearly 70,000 views on YouTube. But Es­cobar said Bauman sound­ed like an amateur on the track.

Bauman agreed and said his time with FAME has allowed him to better showcase his talents and grow as an artist.

Bauman wrote “Ones in the Sky” in one day and said the goal with the track was to inspire oth­ers. Bauman’s new songs are completely different, he said, and more repre­sentative of his ability.

“In this first album peo­ple are going to see … the ar tist Joel Bauman,” he said. “That other guy was the protÃ©gÃ©.”

Escobar said the differ­ence is like night and day, and Bauman’s develop­ment of flow is a big rea­son for that evolution.

He said he tried to stress to Bauman the way the words and music flow together on a track. Though “Ones in the Sky” was a hit, Escobar said he saw no glimpses of that type of flow on the track.

“That was the opposite of flow, in my opinion,” he said. “It just sounded like a speech over a good beat.”

Bauman’s progression is noticeable to outsiders as well. Escobar said he conducted a focus group with interns who had nev­er heard Bauman’s music to illustrate the strides he’s made in his time with FAME.

“We really wanted to see if an outside perspec­tive could see the progres­sion we’ve seen,” he said. “We played seven songs out of order, and the in­terns were able to pick in the exact time in which he recorded those songs be­cause they could hear the development.”

Bauman said he works six to seven hours a day for three or four days a week on his new album. He re­cords out of GoodLook Studios in Minneapolis, which is headed by Casey Golden.

Golden said he toured with the Black Eyed Peas in his heyday and has worked with Prince and Macy Gray. He has also released a solo record but said he has shifted his fo­cus to helping up-and-com­ing artists succeed.

“I’m taking the 15 years of lessons and the wrong turns I made along the way and making sure that stuff doesn’t happen to people like Joel Bauman,” he said.

Golden said he sees a lot of potential in Bauman be­cause of his ability to take criticism.

“He’s got a direction, but he’s open to modifying that on the fly so it works bet­ter,” Golden said. “That is a huge thing in the music industry.”

Escobar agreed and said Bauman has the “it factor” because of his work ethic.

“I’ve worked with some really amazing artists in the past … the one thing those that make it have in common is star quality,” he said. “I think Joel Bauman has that.”

Bauman said the goal in this process is not the al­bum or making money. It’s about making a difference.

“I truly believe that I was put here to change the world,” he said. “I’ve be­lieved that since I was a lit­tle kid and the way things keep falling into place is crazy.”

Bauman said he is still technically a member of the Gophers wrestling squad, but he doesn’t know if he’s eligible to compete. He said he’ll worr y about that later, as he has bigger things on the horizon now.

Bauman said he has always been passionate about music, but it can be a grind at times. He said he keeps at it because of his original vision.

“I wouldn’t just be able to do music if it was just for me,” he said. “If it was me I’d be sitting on a beach or working out or lifting weights. … I’m here to inspire people.”