A&E’s guide to Friday the 13th

This year, the Halloween spirit will arrive early, so start your celebrations this Friday. 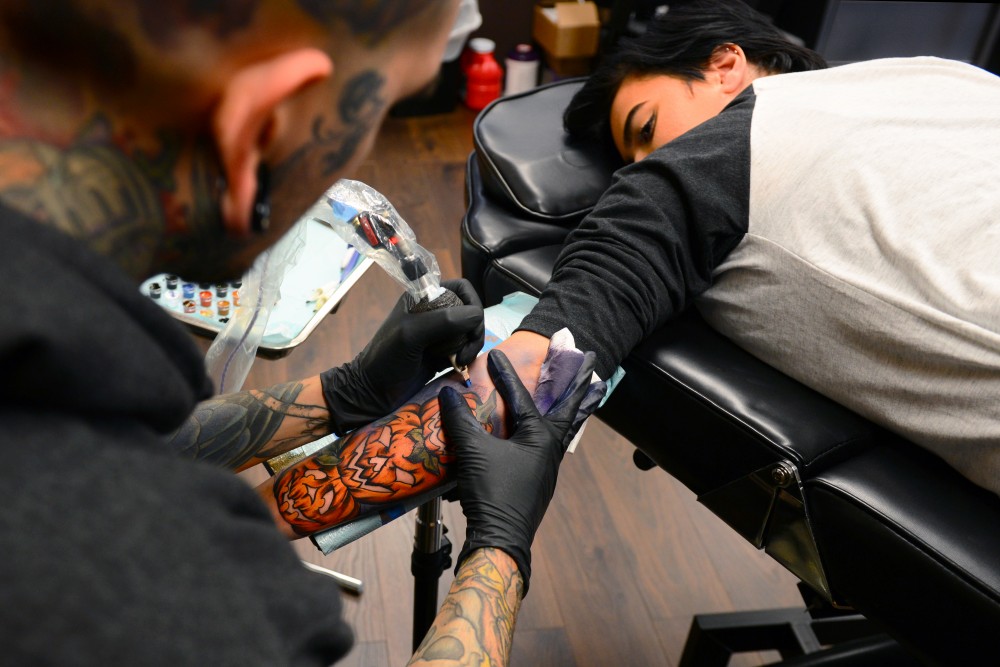 Artist Travis Chavez tattoos jack-o-lanterns on Sierra Burke at Lady Liberty Tattoo in St. Paul Park on Wednesday, Oct. 11. The shop is one of many participating in the tradition of offering discounted flash tattoos in honor of Friday the 13th.

The next Friday the 13th won’t fall in October for another six years, so take advantage of the variety of options held on the (second) creepiest day of the year.

Most events are in high-demand, so reserve tickets and make plans ahead of time in case of sold-out shows and long lines. Events across the Twin Cities metro area range from amped-up haunted houses to cheap tattoos — which will you choose?

Friday the 13th tattoo events are a long-standing tradition. Typically, for the cost of $13, a lucky $7 tip and a long wait, visitors can get a small tattoo to commemorate the day.

“Generally, I’ve done anywhere from just your typical coffin with a 13 on it, or … I’ve done sillier things, like a T-bone steak,” said CM Rutledge, a tattoo artist at Lady Liberty Tattoo in Saint Paul Park. “For this one, being that it’s pretty close to the ‘Stranger Things’ season two premiere, I’ll probably incorporate some ‘Stranger Things’ flash.” Fans of the show can also stop by Lady Liberty Tattoo later in the night for a themed art exhibit curated by the tattoo artists themselves.

The risk of Friday the 13th tattoo events is part of what makes the day exciting.

“It’s really spontaneous, [and] it’s really fun,” Rutledge said. “You’re generally mixed in with a group of people that are there to have a good time.”

Other shops, like 7th Street Tattoo in Saint Paul and the Minneapolis Tattoo Shop, will also host their own variations of the Friday the 13th tradition.

If spontaneous tattoos aren’t your thing, all-night horror movie marathons may be.

The newly remodeled Trylon Cinema will show all eight installments in the “Friday the 13th” series, totaling 14 hours of Jason’s vengeful killings. The event will run from 6 p.m. on Friday to 8 a.m. the next day, with ample intermissions breaking up the horror marathon.

As if the viewing wasn’t enough of a celebration for the day, the first Jason, otherwise known as actor Ari Lehman, who played the killer as a child, will be stopping by the event as a part of the Twin Cities Zombie Film Crawl.

If you make it through all 14 hours of the series, you’ll go home sleep deprived, but you won’t leave empty-handed — survivors will win a commemorative poster and well-deserved bragging rights.

Will you survive the night?

Now located about two miles off-campus, this Minneapolis horror tradition is a fully-independent, artist-driven fright zone — the sets are designed by local artists, while the characters inside come from a variety of performance backgrounds.

“We encourage people to bring their talent into the basement,” said Christopher Barton, the artistic director of the Haunted Basement. “So, if you have dance training, then you use your dance movement as a part of the creature that you create.”

This year, the Haunted Basement moved out of its first home in the Soap Factory and into a warehouse in Northeast Minneapolis.

“It has lots of nooks and crannies and tunnels that go nowhere, all of the creepy things you’d want for a haunted space,” Barton said.

As if Friday the 13th wasn’t enough of a reason to visit one of Minneapolis’s most well-known haunted houses, the Haunted Basement does plan on taking advantage of this coincidence.

“We’ve just found that people really want to come to the Haunted Basement on Friday the 13th … because it adds to that layer of fear,” Barton said. “There will be a lot of things outside for people to do as they’re waiting to go in … The people who show up early might not be seeing the same things as people who show up later.”