A former University of Minnesota student, Alison Kirwin, and Doug Grina are now co-owners of the six-decade-old Dinkytown mainstay. 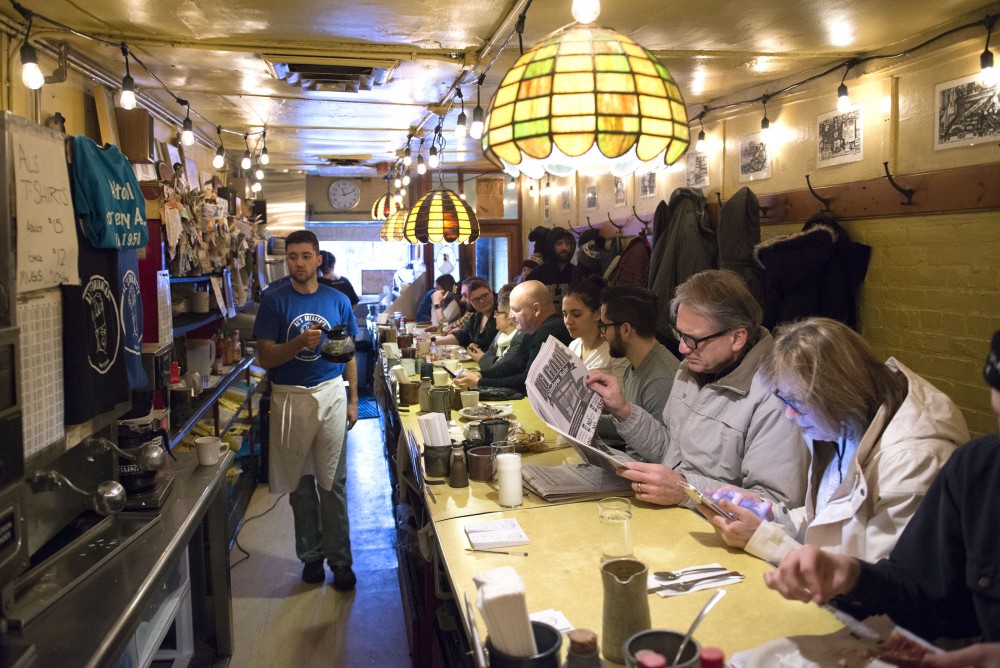 Employee Will Harris carries a pot of coffee while Dean Schieve reads the paper and wife Mary scrolls through her phone in Al's Breakfast on Monday, Jan. 25, 2017. Dean said he's been coming to Al's since he was a student in 1987. "I like the ambience and the people," he said. "It's a pretty cool place to come and read the paper."

On her 22nd birthday, Alison Kirwin stepped into Al’s Breakfast to visit a friend who worked at the tiny Dinkytown haunt — it was 1996, and Kirwin was a student at the University of Minnesota.

With an employee absent that day, Kirwin volunteered to help with some of the eatery’s responsibilities.

Now, two decades after her dishwashing days, Kirwin has taken over ownership of the compact institution on 14th Avenue Southeast, alongside co-owner, Doug Grina. The switchup comes after previous co-owner, Jim Brandes, retired in October after more than 40 years at Al’s.

But don’t expect a major overhaul of the restaurant —Kirwin said the transition in leadership has mostly involved behind-the-scenes adjustments that won’t affect the culture of Al’s.

“I would say most things from the customer perspective won’t change,” Kirwin said. “Al’s is successful partly because we don’t change.”

Al’s has kept it’s intimacy since Al Bergstrom founded the restaurant in 1950. A single counter runs the length of its abbreviated space, which encourages conversation among diners and employees.

“We really get to interact with people instead of taking the order and moving on,” Kirwin said.

Al’s began as a working man’s breakfast spot when Dinkytown was a major railroad hub. Workers would buy meals with prepaid tabs that continue to live in stacks of yellow booklets behind the counter. Some diners still pay this way.

“We think it’s a good idea for parents to buy them for kids in college so that they’re not just spending money on beer,” Kirwin joked.

As the University campus expanded, Al’s began seeing a mix of students and businesspeople. With weekend tourists, as well as regulars, the 14-seat establishment can serve up to 200 patrons in a single morning.

It’s all about the people, said M. R. Ciatti, who has worked at Al’s for almost 30 years. Developing friendships and meeting new people keep Ciatti’s job enjoyable, she said.

“[It’s] definitely not the dirty dishes,” she said.

The atmosphere is bustling most mornings, and a line forms before 8 a.m. on a typical day.

A maximum of five employees must work efficiently in the tight space to keep Al’s humming.

Their methods are well-tested, and many customers are familiar with the way the restaurant runs from repeated visits.

Skeeter Burroughs, who does tech support and works with the marching band at the University, has eaten at Al’s since he was a student in 1991. He said the restaurant hasn’t changed since the first time he visited, but he counts that as part of its charm.

“I can’t get restaurant pancakes anywhere else,” he said.

Al’s still brings in plenty of first-timers along with veterans, Kirwin said, adding that people have passed down their dining traditions through generations of Al’s customers.

Many people have become attached to the place, making it part of their life and contributing to Al’s history, like when a family took their Christmas pictures there, or a newlywed couple went straight to Al’s for a post-wedding breakfast, Kirwin said.

“The biggest challenge coming into it right now is going in and taking over what someone else has established,” Kirwin said. “I’m honored that I get to own this little place that means so much to so many people.”